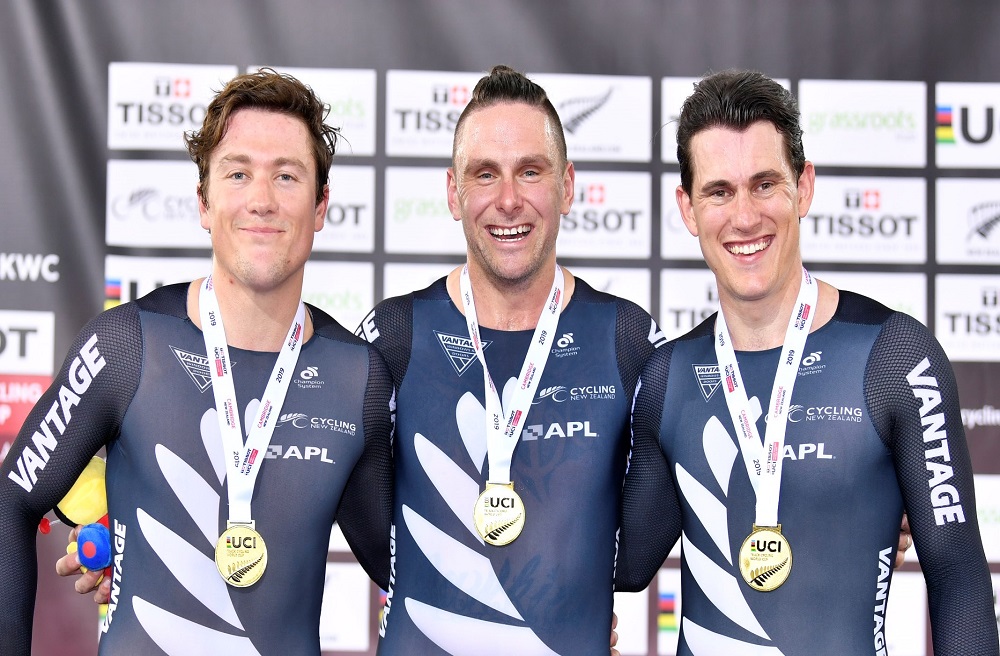 New Zealand cycling made an emphatic statement that it is again a world-class force after dominating the team events on the opening night of the Tissot UCI Track Cycling World Cup in Cambridge.

The three-time world champion men’s team sprint claimed their first World Cup victory in over a year with two rides under 43 seconds at the Avantidrome.

That was matched with an emphatic victory by the women’s team pursuit group who fought hard before prevailing in the final over Canada, and establishing a new national record in the process.

Both were eclipsed with a withering performance by the men’s team pursuit, who set the second fastest time in history on the way to winning over Canada in 3:50.159 which was a new best time by more than two seconds.

The only other final went to the Holy Brother trade team from China who took out the women’s team sprint honours over France.

New Zealand’s Regan Gough, Campbell Stewart, Jordan Kerby and Nicholas Kergozou came within four-tenths of a second of breaking a world record in the gold medal ride stopping the clock in 3:50.159, just shy of the 3:49.804 set by Australia at the Commonwealth Games.

"Straight after we finished the ride, we could see Canada out of the corner of our eye, so I looked straight up at the board... I knew we were going fast, but to actually ride that quick, you don't really think about it until it’s actually happened," Stewart said.

"So yeah I looked straight up at the board and was amazed and then it's partly because of the crowd out there that really cheered us on all the way to the line. We couldn't even hear our coach telling us what to do, but I guess we were riding on feel and just kept on going."

The New Zealand team were in control throughout the competition setting the fastest time in qualifying before setting a new national record of 3:51.722, with Tom Sexton riding in the place of Kergozou. The record would stand for only a matter of hours however until the final.

A fast 1:02 opening kilometre set New Zealand up to power away with an increasingly vocal packed crowd cheering them on. 56sec, 55sec and 56sec kilometres over the remainder of the race saw them come within touching distance of the world mark and again lower the New Zealand national record.

Commonwealth Games silver medallists Rushlee Buchanan, Racquel Sheath, Kirstie James and Bryony Botha smashed their own national record on their way to gold in front of a vocal home crowd, stopping the clock in 4:16.028.

"I did use the crowd tonight, this is my home town and I've ridden this track so many times, and in the last k, you have absolutely nothing left and you’re searching for something. The crowd bought it home and I think we really felt it, the guys and the girls, so we’re super proud to do great rides tonight in front of the home crowd," said Buchanan.

"We came here wanting to do a good ride, we weren't focused on what colour medal we wanted to win, and we just wanted to execute really well and go out and chase it. So we went out fast to see what we can do, and the tracks running really well so we just thought let’s do it."

The previous record of 4:17.560 set in October last year in Paris at the opening World Cup was lowered by more than a second and a half. Having earlier set the fastest time in qualifying the trio started the gold medal ride as slight underdogs with Canada breaking the All Comers Record in the first round.

Trailing by two tenths of a second at the one kilometre mark the quartet powered away in the second kilometre opening half a second advantage. With the crowd behind them they pulled away further to the delight of the crowd pipping Canada by more than a second.

The hotly contested ride for bronze saw Italy emerge on top on in 4:18.069 ahead of the Subway New Zealand Track Trade Team.

A fraction off setting a new national record in the first round, Webster, Dawkins and Mitchell were slightly slower in a tough gold medal ride against the Australian team of Nathan Hart, Jacob Schmid and Thomas Clarke, but produced a consistent performance to win their first World Cup event since 2017. They clocked a time of 43.121 seconds.

“I’m not gonna lie, it’s good to be back in the winner’s circle and good to put our best foot forward. That ride we did in the first round, that’s the second fastest time we’ve ever done, I believe only the final in Rio was faster and only just, so we really are back, knocking on the door now,” Webster said.

After a period of change over the last 12 months, Webster is thrilled they were able to string three excellent races together. “I think that’s a testament to how we got through the past year, but also Rene’s input and this whole new evolution of how we’re approaching the event, we’re really starting to see some dividends.”

The French trio of Gregory Bauge, Sebastien Vigier and Michael D’Almeida wrapped up the bronze medal with a tight win over China.

Song Chaorui and Bao Shanju won by just over two 10ths of a second from Sandie Clair and Mathilde Gros, taking it in a time of 33.460 seconds.