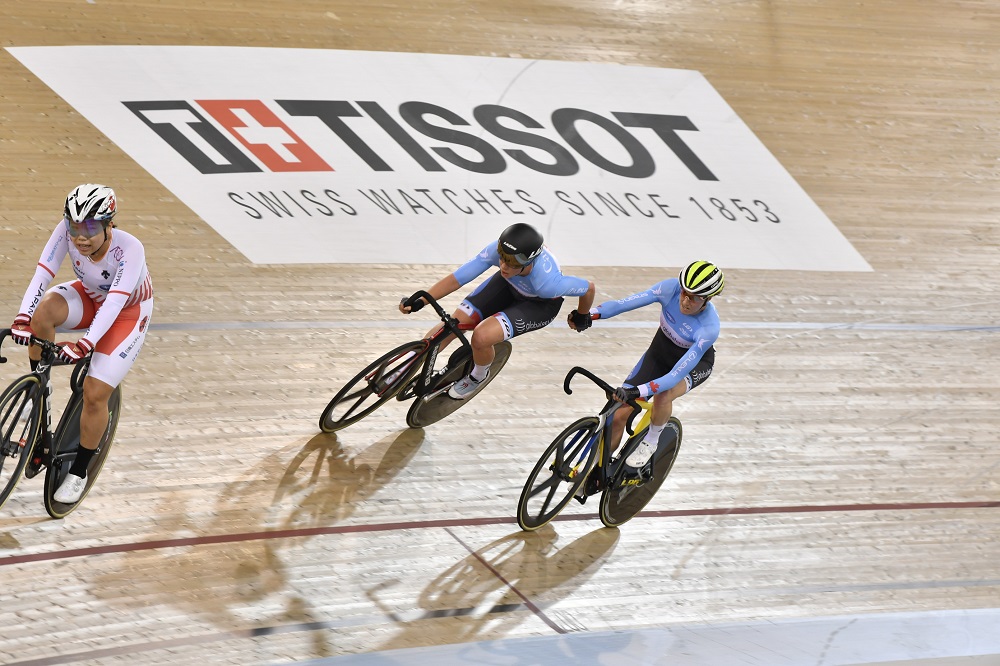 Australia and Hong Kong came away with two gold medals each; with sprint star Lee Wai-sze accounting for both for Hong Kong in winning the women’s sprint and Keirin. Eight different nations won gold medals across the three-day meet.

The 25-year-old won the semifinal in two-straight rides over Frenchman Sebastien Vigier, both with emphatic performances, and he was equally untroubled in the final for his first World Cup sprint victory.

"I knew I was coming in here with good form. I have never even been on the podium before in a sprint so to come away with a gold I mean I am absolutely ecstatic,” said Hart. "I wouldn't say it was a surprise to be honest I was feeling good all day and was really happy with how I raced.

"This is the third World Cup sprint I have done. I raced in late 2013 at Aguascalientes and didn't even qualify and then it was a few years focusing on team sprint first wheel and it has just been the last couple of World Cups that I have had the opportunity to race the sprint.

Both New Zealand riders, Sam Webster and Ethan Mitchell, clocked the same time of 9.692s to be fourth and fifth fastest respectively, to bypass the first round and move to the 1/8th round. Australians Nathan Hart and Jacob Schmid were second and third fastest respectively.

Rudyk and Hart progressed to the semifinals in two straight rides, while Vigier fought back to edge Schmid in the decider of their quarterfinal.

Mitchell lost his first round quarterfinal against Webster, but fought back to win the next two races and progress to the semifinal.

However he was edged by the slimmest of margins on the line by Rudyk in two exciting semifinal rides.

WOMEN MADISON
Inaugural Madison World Champions Jolien D'hoore and Lotte Kopecky of Belgium were the dominant force in the women's Madison winning five of the eight sprints on route to the gold medal.

"The Italians are really strong, we knew them from races before, so we had some attention on them, but we just focused on the sprints and ourselves, and making a strong race, and that’s what helped us in the end," said D'hoore.

"I think compared to previous contests and where we were, we are making a nice progression and we hope to continue that on to the worlds," added Kopecky as the pair look to regain their rainbow jersey at the upcoming UCI Track World Championships in Poland.

The early lead switched between the Belgian's and Italian pair of Letizia Paternoster and Maria Giulia Confalonieri going 1-2 in each of the first four sprints.

Just after the half way mark the Belgian team made their mark on the race moving clear in to the lead with Italy missing points in the sprint. From here Italy tried to regain the momentum, though was unable to dislodge the dominant Belgians who won the final sprint to seal the win on 39 points, with Italy silver on 27.

After taking points in the opening two sprints a late charge by New Zealand's Racquel Sheath and Rushlee Buchanan saw them take the final spot on the podium on nine points, two clear of Russia and Belarus.

Portugal's Maria Martins made repeated attempts to animate the 40 lap race including with three to go, though the bunch was quick to react to every move wanting to keep the race together for a bunch sprint.

As the bell sounded Fidanza was on the front with Pikulik tucked in behind with Hodges as the remained of the bunch fought to remain in touching distance. The speed of the front three was too much as Fidanza lead the race home.

MEN’S OMNIUM
Claudio Imhof from Switzerland has taken the narrowest of victories in the men’s omnium, winning the title by just one point from Raman Tsishkou of Belarus. Imhof’s consistency was key, finishing fourth in the scratch race, third in the tempo and third in the elimination, before controlling the points race to seal the victory.

Tsishkou kept pace with Imhof throughout the competition, but wasn’t let out of the sights of the Swiss rider in the final event and couldn’t pick up the sprint points required. Imhof finished on 113 points and Tsishkou 112. Italy’s Liam Bertazzo, who had earlier won the tempo, took home the bronze medal on 108 points.

“It was really a great day today. I started well in the scratch, which is not really my favourite discipline, but I managed to be in the top five and then I just tried to keep my discipline, keep my head up and push as hard as I can, “ said Imhof.

Despite two false starts, the elimination race developed into the most enthralling battle of the four disciplines. It was eventually won by Denmark’s Niklas Larsen from Tsishkou, but it was the third place finish of Imhof that vaulted him to the top of the overall omnium standings heading into the final points race.

Lee did it the hard way in the final. Sitting in fourth place at the bell lap and forced wide over the final 250 metres, she won it in a photo finish from Great Britain’s Katy Marchant with the winning margin just four 1000ths of a second. Liubov Basova from Ukraine took the bronze medal.

World champion Nicky Degrendele of Belgium missed out on the final, as did New Zealand’s Natasha Hansen, eventually finishing 10th and 7th respectively.