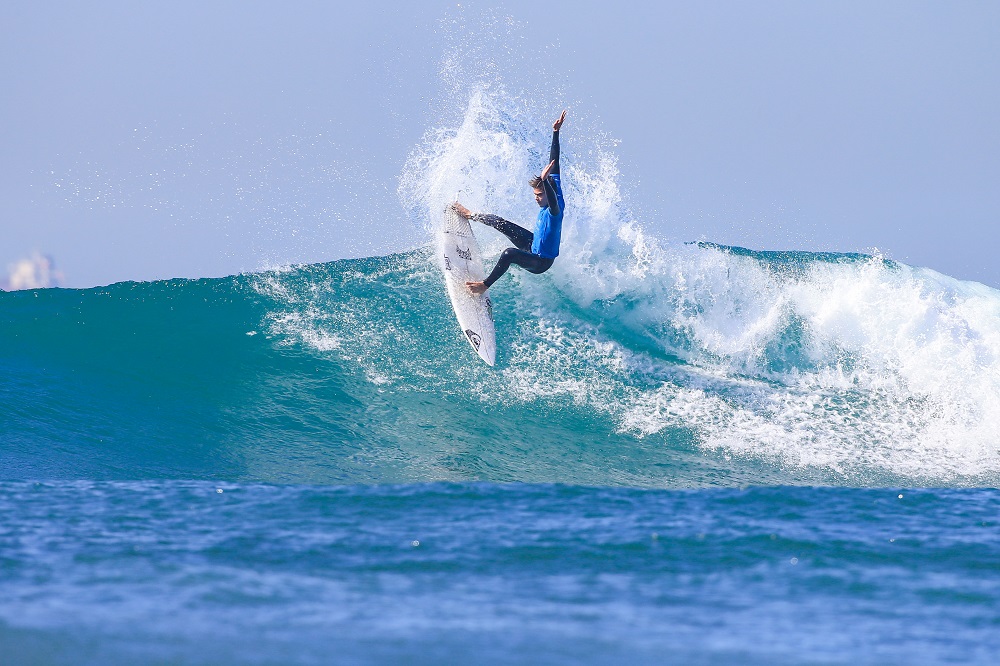 Anza continued to pump for a fourth consecutive day of action at the QS5,000 Pro Taghazout Bay. Competition ran through the remaining heats of Round 2 as well as Round 3 to qualify 24 surfers for Wednesday.

As conditions continue to build, the event is expected to move back to the main venue of Anchor Point tomorrow. Before that, some of the world’s best QS athletes got plenty of training with another afternoon of firing rights at Anza.

Records were shattered again today, with excellent scores dropping all throughout Round 3, as surfers took on the glassy four-to-six foot sets peeling down the soft reef of Anza.

Victor Bernardo (BRA) found near-perfection with a 9.50 (out of 10) for a combination of flawless carves. The Brazilian, who ruptured his eardrum surfing an epic swell at home only two days before flying to Morocco, didn’t seem affected at all as he dismantled the perfect rights of Anza.

“That 9.5 kind of relieved a little pressure I put on myself,” Bernardo said. “The QS is hard, I’ve had a couple of tough years and I needed this to feel that I can battle with these guys. This is the best backup wave ever I’m super stoked to be here and I can’t wait to see what Anchor point does when it’s on.”

Liam O'Brien (AUS) in the following heat dropped a 9.70 for a similar, yet even better ride on his way to securing the day’s best overall performance.

“That was awesome, definitely some of the most rippable waves I’ve ever had in a heat,” O’Brien said. “I’m from the Gold Coast, Burleigh Heads so I’ve surfed a few rights in my time and it’s been a pleasure to surf a few heats over here.”

Former Championship Tour competitor Willian Cardoso (BRA) displayed his usual hulk-sized turns and collected a couple of solid scores as well as he moved into Round 4. Launching his qualifying effort for 2020 in Morocco, the Brazilian looks as motivated as ever to re-join his peers next season.

“Everyone does their own thing and I know mine is power surfing,” Cardoso said. “Being connected to the ocean helps too and I feel like everything went my way today. Being back on the QS is part of the job, there are ups and downs and now it’s time to go up again. I know my surfing is there to qualify again so I just need to make the right decisions and I’m confident I’ll get there.”

South African Adin Masencamp (ZAF) held the pole position for a while with a 17.67 heat total but was later dethroned by O’Brien. The Cape Town native still offered a convincing effort and could be a threat to the more familiar faces in the QS top ranks.

“Starting the heat right calms your nerves and puts you in rhythm,” Masencamp explained. “I was definitely in rhythm in that one and I’m hoping to keep that flow throughout the event. I realized last year that it’s all about consistency, some of the guys who qualified didn’t win any events, so my goal this season is to be my most consistent self. Towards the end of the year I want to be in contention and the goal is obviously to make the tour in 2021. Seeing the other South Africans get on tour really inspires me and I want it to be my turn.”

“I would just like to thank the City Surf Series back home in South Africa for holding all of these events,” he added. “We never used to be able to do the big events cause you’d have to travel overseas to compete first and it’s so expensive. Having all these events at home really gave us that opportunity to surf against the best in the world and showcase our South African way of surfing.”

Frenchman Timothee Bisso (FRA) was one of the very few goofy foots to find the excellent range today. The former runner-up in the world juniors in Ericeira proved lethal in the punchy rights on his backhand and looks poised to start his 2020 qualifying bid with a bang.

“I tried to be patient once I got my first good wave and it was lonely for a while in the lineup there,” Bisso said. “I sat a long time but when the wave came I was ready and confident and got the score. I’ve still got some in the tank, I haven’t really showed everything I can do so I hope I make a few more heats and can go all in.”

Unfortunately the late afternoon brought despair among the many Moroccan surf fans who witnessed the early elimination of their local hero Ramzi Boukhiam (MAR). The talented goofy foot couldn’t quite find the right waves in his heat and despite a valiant effort, came up just 0.54 short of the second qualifying spot.

Now is the moment everyone has been waiting for, as competition relocates to Anchor Point for the call tomorrow Wednesday at 8 a.m for a potential big day to decide the event’s finalists.