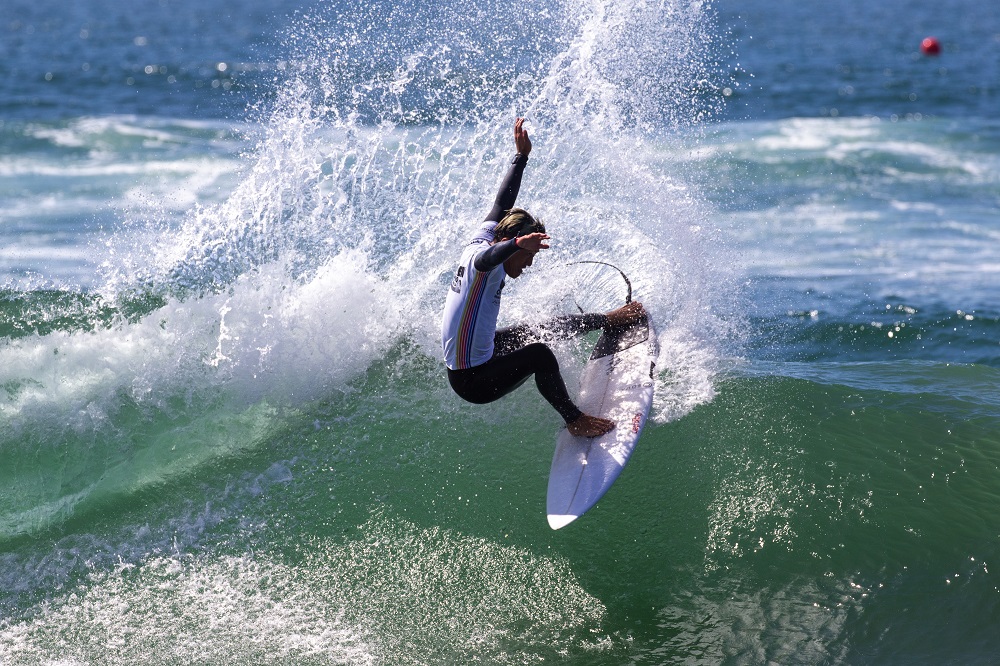 Jake Marshall Charges into Round 3

The US Open of Surfing Huntington Beach presented by Shiseido, the opening stop on the 2021 World Surf League (WSL) Challenger Series (CS), ran through the remaining women’s Round 1 heats and men’s Round 2 Heats 1 - 8 today in windy, two-to-three foot conditions. Competitors had to show their grit as winds remained throughout the day to test surfers’ abilities for their chance at advancing through to fight another day.

A massive few days for Ezekiel Lau (HAW) culminated into a decisive Round 2 superheat victory over recent Rip Curl WSL Finals contender Conner Coffin (USA), Team USA Olympian Kolohe Andino (USA), and South Africa’s standout Adin Masencamp. Lau claimed the title of ‘The Ultimate Surfer’ in the season finale of the ABC show on Tuesday, September 21, ahead of the stacked match up he had to deal with today. The former Championship Tour (CT) competitor is looking for his shot to rejoin the world’s best by any means necessary.

“It feels great (to win the Ultimate Surfer) and it was an awesome experience for me,” exclaimed Lau. “Something way out of the box for me but I look back on it now and it was amazing - not only because I won but just the whole experience. I learned a lot about myself and I’m here trying to utilize everything I learned. I want to qualify any-which-way I can and I’m looking to win the CS so that’s my plan here.”

2019 CT qualification hopeful Jake Marshall (USA) put together a masterful performance in his Round 2 bout against Australian duo Callum Robinson, also advancing, and Dylan Moffat alongside QS veteran Carlos Munoz (CRI). The Encinitas, California, competitor’s devastating backhand earned him a 14.10 (out of a possible 20) heat total - Round 2’s highest.

“It definitely feels good to get a win when it’s tricky like that out there,” expressed Marshall. “I wasn’t really expecting that (wave) to be honest and it felt good getting that 7 right away to help boost my confidence. I know this wave really well. Growing up I felt like I was doing a contest here every weekend and it’s great having my family, my girlfriend, and just a solid crew around.”

A brilliant showing from 2020 Corona Open China winner Shun Murakami (JPN) pushed him into Round 3 - helping eliminate CT competitor Jack Robinson (AUS) and CT veteran Michel Bourez (FRA). The Yugawara, Japan, surfer was in the Top 10 of the QS before events paused but showed his forehand and backhand attack has lost none of their potency in the stacked bout with critical finishes to secure an impressive 7.67.

“My first wave was good and it had a nice inside section for two turns then I got a good backup so that was a good heat for me,” said Murakami. “I really want to qualify and there’s three more events after this so I know I need to stay focused and that will help me qualify. I’ve worked really hard in my off-time and that heat shows me I can do it so I just hope to keep going.”

Also, continuing their surge in this event with heat victories, Tahiti’s Mihimana Braye put up another great showing in Round 2 Heat 2, Long Beach, California, QS warrior Nolan Rapoza remains on fire taking down three accomplished Brazilians, Lucca Mesinas (PER) continues his impeccable performances and Billy Stairmand (NZL) rose to the occasion in Round 2 Heat 8.

“Right when I got priority I paddled for a wave and didn’t get it so that was a mistake but then that ended up being a good thing,” said Simmers. “I ended up going over to the left and the perfect wave came, and then everyone paddled over to that left then I went over to the right. Then I got the right so everything went my way and I feel like that’s what you have to do, and it’s whoever gets the one wave.”

The women started day two action and two-time US Open victor Courtney Conlogue (USA) made her long-awaited return to her home lineup arena in solid fashion despite tough, high tide conditions. Local knowledge paid dividends in the end with her debut win after coming back from an ankle injury sustained in Mexico proved a non-factor for the 29-year-old.

“I’ve done this event since I was 11 or 12 and it’s one of my grassroots events,” expressed Conlogue. “I love just competing here and being with my hometown crew. This is where it all started for me and where I draw inspiration from, and where I got that drive to be where I am now.”

Japanese competitor Shino Matsuda already has two QS victories under her belt and now looks for a big Challenger Series win in Huntington Beach as she dealt with the tough conditions beautifully. The Shonan, Japan, competitor earned a 7.33 to overtake former CT competitor Brisa Hennessy (CRI), also advancing, and held the lead until the final buzzer.

“My home can be small like this and it was pretty slow so I wasn’t nervous in my heat,” said Matsuda. “I was lucky to get through that heat with some good waves. I’m on one of my favorite boards, it’s an epoxy, and it worked so good in these conditions. Hopefully I can keep going with these good results.”

Also advancing into Round 2, India Robinson (AUS) and Alyssa Spencer (USA) shined in their debut heat victories today.
A 7:30am PDT call will determine a likely 8:05am PDT start for men’s Round 2 Heat 9 with men’s Round and women's Round 2 on standby.