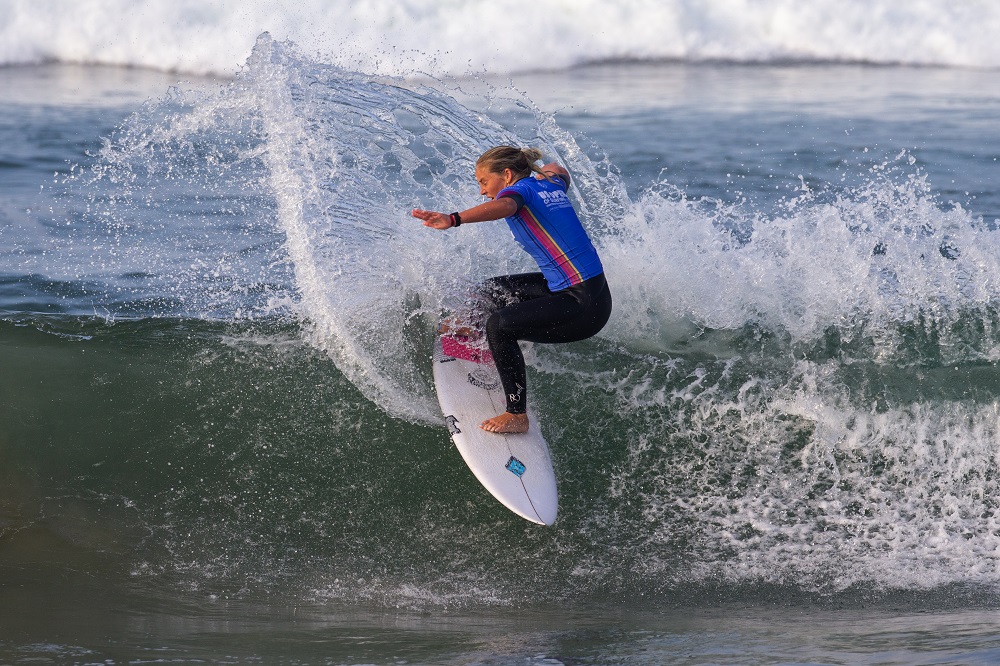 An impeccable performance from 19-year-old Gabriela Bryan (HAW) shocked the event by eliminating Team USA Olympian, Championship Tour (CT) No. 6, Caroline Marks to start the women’s Quarterfinal duels. The Kauai, Hawaii, competitor had total control of the heat after getting her start at the 24-minute mark and went on to post a stunning 14.26 (out of a possible 20) heat total.This notes Bryan’s best result in a major WSL event with a now Semifinal appearance.

“I feel in my previous heats I’ve had a little bit of luck on my side just getting by so it felt really good to have a solid heat and make it to finals day,” expressed Bryan. “I definitely knew I needed to bring my A-game out for that heat against Caroline (Marks). My coach Rainos and I have been watching the waves trying to figure out where the best ones were coming in and knew I had to perform my best on them.”

A chance for an all-Hawaii Final is up for grabs after former CT competitor Coco Ho also claimed a big win over an in-form Sawyer Lindblad (USA).

Fellow emerging talent Caitlin Simmers (USA) looks unstoppable in a jersey once more and added Sara Wakita (JPN) to her list of event threat victories and moves into her fourth-straight WSL Semifinal appearance in 2021. But, it was hometown hero Courtney Conlogue (USA) who shut the door on the next generation talent Bettylou Sakura Johnson (HAW) with a phenomenal display of power surfing.

The two-time US Open victor’s backhand attack laid waste to the lefthanders coming into the lineup as the 29-year-old looks for her third US Open win spanning thirteen years.

“I was planning on just catching sets but then she got those quick fives and I thought I just needed to get into a rhythm,” explained Conlogue. “Just to build house and then drop the hammer out the back on the set waves and it was a good heat. Bettylou (Sakura Johnson) has been surfing really well and I knew it was going to be a great matchup.”

Callum Robson (AUS) put the event on notice that he’s here for a big result after securing a Quarterfinal spot over Tahiti’s talent Mihimana Braye. Robson has crept through this event under the radar with advancing positions in each of his heats but wasn’t leaving anything to chance against the Tahitian powerhouse - dropping an excellent 8.00 (out of a possible 10) with a jaw-dropping air-reverse on set wave, closeout section and a 15.00 heat total.

“It was pretty emotional just after getting those two good scores and not having put a good heat together yet, and I knew he was going to be hunting until the end,” said Robson. “We did that air on the inside the crowd went nuts and I knew it was going to be right there so I’m stoked to get through. This is the first time I’ve competed on the mainland (United States) and it’s pretty sick.”

Fellow Australian, 2019 US Open runner-up, Liam O’Brien joins Robson into the Quarters after a brilliant showing over Peru’s Alonso Correa.

An all-star clash between CT veteran Kolohe Andino (USA) and The Ultimate Surfer winner, former CT competitor, Ezekiel Lau (HAW) unfolded with both getting their opportunities to showcase their world-class prowess. After a back-and-forth battle, Andino’s decision to split a wave on his priority benefited the California competitor as he earned a heat-high 7.17 and ultimately a massive win.

“When I saw that wave (in that priority situation) I just focused on my game and went left to try and do what he did when he got his six which was one big slam out the back and finish it off,” explained Andino. I heard he got an air and I thought oh, no, he might get a bigger score and end the heat with priority but then they gave me the seven so I’m stoked. I love to compete here at the US Open, sleep in my own bed, and I wouldn’t rather be doing anything else.”

“It’s honestly so emotional for me at this point right now,” expressed Rapoza. “This time last year I had surgery - I had hip surgery then knee surgery six weeks later. It doesn’t really feel real yet and I want to keep it going, but it’s a dream and I feel like I deserve be here.”

Kanoa Igarashi (JPN) returned to the Huntington Beach Pier arena facing another San Clemente threat Kade Matson in what became a blow-for-blow heat. Matson didn't shy away from the opportunity to eliminate rivaling local favorite Igarashi, but the Huntington Beach born-and-raised competitor showed his experience and world-class caliber to steal the heat win with a 7.50 and 6.10 - finding 10 waves to try and attack in his victory.

"I just love surfing Huntington and couldn't control myself when it's like this," laughed Igarashi. "I got excited and I think the little kid in me came out. There's for sure a rivalry between Huntington Beach and San Clemente, and it's a friendly one but you want to win that much more. In the end it's all love but Kade (Matson) was surfing really well so that was a good win."