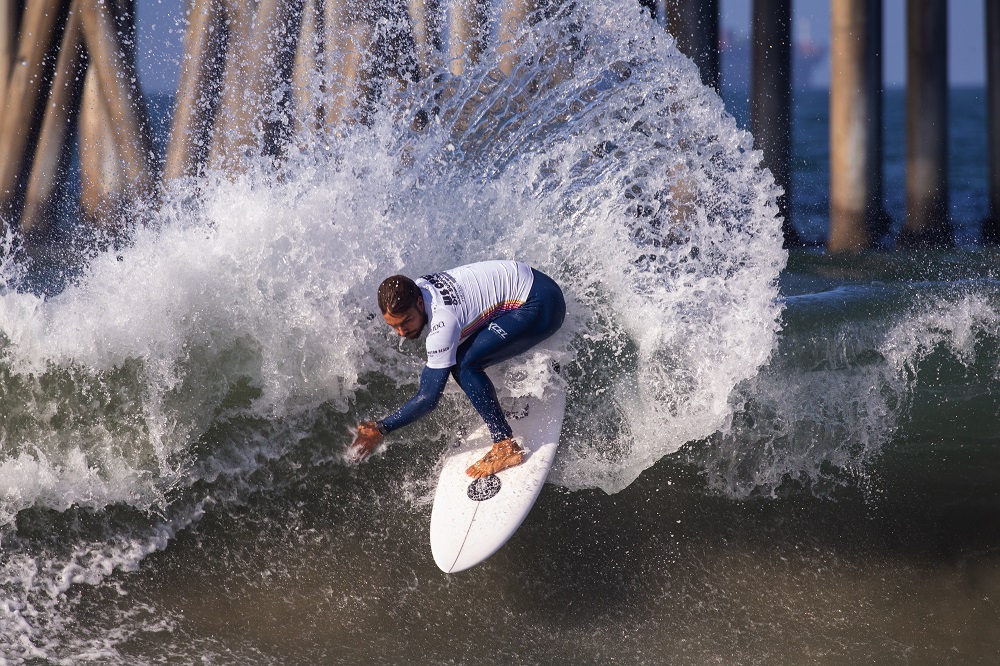 The US Open of Surfing Huntington Beach presented by Shiseido, the opening stop on the 2021 World Surf League (WSL) Challenger Series (CS), powered through a decisive day of action to conclude men’s and women’s Round 2 in two-to-three foot windswell. The women are now down to just 16 competitors as the men’s field dwindles to 24.

Team USA Olympian Caroline Marks (USA) smashed her Round 2 heat, posting a near-perfect 9.00 (out of a possible 10) for the highest single-wave score of the event so far. The Floridian-turned-California resident unleashed her decimating backhand leaving her competitors needing near-perfection of their own to overtake the 19-year-old.

“That heat was extremely slow just being on the dead high tide so I was expecting it but the waves are really fun when they come in,” expressed Marks. “My board feels great and that was a lucky little wave so I’m stoked I got it. Mike (Parsons) and I were watching the conditions, and just trying to figure out the best spot to sit. Every heat has a different personality so it’s all about where to be when the waves come in.”

Current North America No. 3 and recent WRV Outer Banks Pro pres. by Pacifico victor Alyssa Spencer (USA) went on to eclipse the day’s heat total combinations with an 8.17 and 14.84 (out of a possible 20) heat total. The Encinitas, California, competitor’s forehand attack led the way on the lefthand runners coming through the lineup and left the field in a combination situation, meaning they needed two new scores to match Spencer’s scores, as the horn sounded.

“That heat was definitely fun in the first half with a big flurry of waves and I managed to get myself on two of them,” said Spencer. “It went really slow after but I was happy to get two at the beginning. I had priority on that last wave and took it all the way to the inside, and I was hoping that both of us would get a turn on the inside but we came pretty close to each other. It was unfortunate she got an interference on that and it was just a weird priority situation.”

“It was really tricky out there and there were two peaks breaking at the same time , and I had first priority thinking what should I do,” said Fierro. “I picked a spot and just sat, and a wave came to me which ended up being my 7 so I felt comfortable with it. I surf the most perfect waves at home but I got my biggest win in really, really bad waves I would say. I always feel comfortable knowing I can surf well in these conditions.”

Coco Ho’s (HAW) locked in an impressive 14.50 heat total and 2018 CT qualification threat Sara Wakita (JPN) followed her performance with a 14.03 of her own. Each big turn garnered a roar from Wakita’s supporters on the beach as she took over her heat alongside Portugal’s Yolanda Hopkins.

“I could hear (all the people on the beach) cheering me on and I was really nervous in that first half of the heat because I couldn’t catch one,” said Wakita. “That 7 got my confidence up and then the back up soon after so it was a fun heat. I knew if the girls got the same set they could get the score as I did or better, and I just needed to find one that was better than my other scores. I’m glad it worked and happy to get through that one.”

2019 US Open runner-up Liam O’Brien (AUS) hasn’t lost his rhythm with Huntington Beach after a two-year hiatus and excelled in his Round 2 affair alongside Peru’s Alonso Correa. O’Brien’s 7.33 thrusted him into the lead before adding a 5.13 and securing a big win over former CT competitors Caio Ibelli (BRA) and Matthew McGillivray (ZAF).

“I initially was going to sit with everyone then I had this inkling that there might be waves down the beach but clearly that was wrong,” laughed O’Brien. “Fortunately when I came back I got a wave but I was kicking myself for a little bit in that heat. (Rainos Hayes) has been helping a lot here and in the past as well and he broke it down for me after that heat, and I just need to fix it up a bit.”

ole Houshmand (USA) added his name to the list of San Clemente, California’s, rising talents who made his breakthrough in 2019 and showed why he belongs in Challenger Series conversations today. The 20-year-old’s aggressive forehand and ability to navigate the high tide conditions proved lethal as Lucas Silveira (BRA) joined Houshmand into Round 3 - eliminating Australian threat Jordy Lawler (AUS) and former CT competitor Willian Cardoso (BRA).

“I made a mistake in the beginning of that heat and I lost priority but then I saw that wave and thought it can’t hurt me to go,” explained Houshmand. “There wasn’t anything out the back so I took it all the way in and it let me do four turns so it worked out. The (Jack’s Surfboards Pro) was the first event I surfed in about 18 months I think it was and it was crazy because every North America guy was there with Nat (Young), Evan (Geiselman), and it definitely helped me carry a lot of confidence going forward.”

razilian standout Edgard Groggia put on a show all his own in a Challenger Series collective heat including Round 1 threats, Shane Sykes (ZAF), also advancing, Joao Chianca (BRA), and Maxime Huscenot (FRA). Groggia made great work of tough conditions to earn a solid 12.80 heat total to continue his success in 2021 - having already earning two Final appearances on the QS in Ecuador.

“I’m super stoked to keep advancing through my heats,” said Groggia. “I found the good waves and I’m excited about that, and let’s go to the next heat. I’m stoked to win over Joao Chianca, he’s one of the best and we surfed against each other in Ecuador. He was surfing very good so I’m just glad for everything that’s happened this year.”