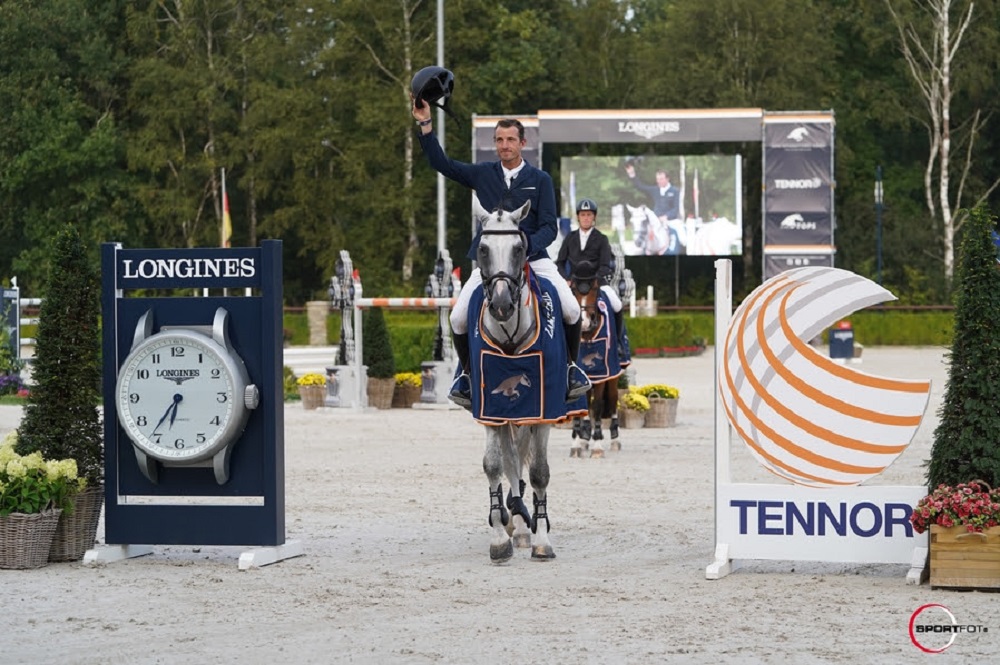 Gregory Wathelet (BEL) and the super-charged grey stallion Nevados S made it their day winning the €300,000 GC Grand Prix of Valkenswaard Presented by TENNOR in blistering style.

The equine firepower on display was breathtaking with familiar star horses and future champions lighting up Tops International Arena and giving fans around the world watching GCTV an incredible treat.

After his win Gregory said: "I am very very happy and my horse jumped amazing. I knew the jump off would be really fast so I took some risks and fortunately he played the game with me. I know my horse is quite fast and on the left turn I can take some risks. It was my day today.”

Gregory, who received a stunning Official Watch from Longines during the GC Grand Prix of Valkenswaard prize-giving, also thanked the organisers of the GC of Valkenswaard: “We have to be happy because for everyone and for the sport it was difficult this year. We have to thank Jan for giving us the opportunity to do this kind of event in this period and thank you Tennor.”

Top riders turned out in force to seize the opportunity to compete again at the very top level and there was emotion in a poignant retirement ceremony for the legendary stallion of modern show jumping Don VHP Z. The champion horse took a final turn in the arena spotlight as Harrie Smolders said “He jumped over and over clear and clear at 1.60m level, he is one of a kind, I don’t think many horses will ever match that. He brought me to number 1 in the world, he brought me the Longines Global Champions Tour title, always under pressure he was unbelievable.” The pair took a final lap of honour before Don VHP Z heads off to a well-deserved retirement from the sport.

The build up to the jump off was a fascinating look at the form of both top riders and horses and the immaculate sand arena was the perfect stage for the much-anticipated world class CSI5* Grand Prix with the 1.60m course proving a robust test of the best.

First to go in the GC Grand Prix of Valkenswaard Presented by TENNOR was Marc Houtzager (NED) with Sterrehof's Dante. The pair set out around Uliano Vezzani’s testing track with confidence but could not keep all the poles up, finishing on 8 faults. The next two riders, Evelina Tovek (SWE) and Jeanne Sadran (FRA) both finished on 4 faults. The first clear of the class came early on with a solid clear from an ecstatic Simone Blum (GER) and DSP Cool Hill.

All eyes were on last year’s LGCT Grand Prix of Valkenswaard winners Maikel van der Vleuten (NED) and Dana Blue and the fantastic combination showed their class in the sweeping main arena. A light touch resulted in a disappointing pole at the penultimate oxer, and an unlucky 4 faults.

Jane Richard Philips (SUI) had an unfortunate start with Clipper du Haut du Roy but was determined to keep up the pace for a fast 4 faults. However, the last fence fell and Jane would finish on 8 faults with one of the fastest rounds so far.

Young rider Lucas Porter (USA) also kept up a strong pace and really had to ride for the triple combination, and though C Hunter displayed his careful technique, Lucas also fell foul of the final fence to finish on 4 faults.

Incredibly, three riders in a row would take down the final fence, the Stal Tops oxer, and third to be caught out was Shane Breen (IRE) and Z7 Ipswich despite a strong clear around the rest of the course.

Bart Bles (NED) pulled off a great performance with carefully considered striding and strong jumping with Kriskras DV to take the second clear round of the class and he was followed in by another rising star, young rider Mike Kawai (JPN) and his striking stallion Tokyo du Soleil who finished with 12 faults.

Philip Houston (GER) sealed a spectacular clear with Chaccsky PS in the combination’s first ever Grand Prix together, marking them as ones to watch into the jump-off and for the future. Jessica Springsteen (USA) came in to the tulip planks on an angle but couldn’t keep the plank in place, however Don Juan van de Donkhoeve showed real potential with a great jump over the Tennor vertical and finished on 4 faults.

Harrie Smolders (NED) took a more forward approach to the delicate planks with Dolinn and while his risk paid off, the back rail fell in the middle of the triple combination and Harrie fell out of contention for the jump-off.

A stunningly careful round from Carambole and Willem Greve (NED) showed the pair’s impressive partnership, and they sailed around the course to look like ones to watch in the jump-off.

All eyes were on Christian Ahlmann (GER) as he took to the course with Dominator 2000 Z, and Christian used all his skill throughout the course, adapting the horse’s stride to perfection to clinch a clear round.

Edwina Tops-Alexander (AUS) finished on a score of 8 faults with Identity Vitseroel, swiftly followed by Olivier Philippaerts (BEL) and H&M Legend of Love who ended on 4 faults. Emily Moffitt (GBR) was foot perfect through the triple combination that had caught out so many riders but was another to finish on 4 faults.

Max Kuhner (AUT) made the course look easy with Elektric Blue P, the consistent combination pulling out all the stops to be really in the running in this Grand Prix following their strong performance in Doha in 2020.

Claire Z demonstrated her scope with Pieter Devos (BEL) and the talented pairing flew through the tricky triple combination. Steadying for the Stal Tops oxer, Pieter left nothing to chance to seal their place in the jump-off.

British rider Scott Brash (GBR) and Hello Jefferson went for some forward strides and despite an incredible edge-of-the-seat moment at the bicycle vertical and the final fence, Scott displayed his innate skill clearing the final two fences, and clinching the eighth clear of this thrilling competition.

Taking his time around the course and adding strides to ensure careful jumping, Gregory Wathelet (BEL) and Nevados S were never in any doubt about their fate and jumped a superb and intelligent clear round to take another spot in the jump-off.

The jump-off was set to be a blistering competition, as Marlon Modolo Zanotelli became the next rider to join the ranks of those through to the next round with his consistent horse VDL Edgar M.

Misanto Pret A Tout demonstrated all his experience with legendary rider Marcus Ehning (GER) with an impeccable round to secure their qualification for the jump-off. Kevin Staut (FRA) was unable to replicate his success from yesterday’s qualifying class with Viking d’La Rousserie, but the leading rider from the qualifier, Darragh Kenny (IRE) consolidated his place.

First to go was Simone Blum with DSP Cool Hill and the pair set out around the course aiming for a clear. It wasn’t to be for Simone today however, and they finished on 4 faults in 52.74 seconds.

Bart Bles used Kriskras DV’s long stride and turned tightly in front of the flowers, galloped to the Longines oxer and held a shorter stride to the final Tennor upright, banking them the first double clear of the class in 48.47 seconds.

Philip Houston took careful lines on this new horse, but had one fence down to finish on 4 faults in 53.43 seconds.

Opening up Carambole’s long stride, Willem Greve put the pedal to the metal and sailed over the final fence for an exceptional clear round just one second shy of Bart Bles’ time, to finish in 49.55 seconds.

Just one pole fell for Christian Ahlmann and Dominator, and the pair finished on 4 faults, 2 seconds faster than Bart Bles in 46.43 seconds.

Max Kuhner looked to be heading to the top of the leaderboard with an incredibly fast round, but the Tennor vertical fell at the final fence and the top spot was snatched from his grasp despite the fast time of 44.80 seconds.

Scott Brash added an extra stride in the roll back to fence 15 leaving some room for others to be faster. He flew into the lead on Hello Jefferson at this stage in a superb fast round in 45.72 seconds.

Gregory Wathelet went wide to fence 15 but he kept motoring on Nevados S. He was lightning fast around the course, galloping to the final upright, with spectators on the edge of their seats. His risks paid off and he shaved an incredible 1.10 seconds off Scott Brash's time to clinch victory in 44.62 seconds.

Also taking the outside route in the roll back to fence 15, Marlon Modolo Zanotelli had his foot to the floor in characteristically fast style, taking a risk to the Tennor upright which came tumbling down.

A pattern emerged as every German rider in the jump-off had fence 2 down and Marcus Ehning would be no exception. He had an early fault with Misanto Pret A Tout and finished in 7th place overall.

Darragh Kenny had it all to play for as the last rider to go in this jump-off, and went in aiming for a fast clear. Knocking just one pole, Darragh finished in 10th place on Chic Chic in 49.13 seconds.