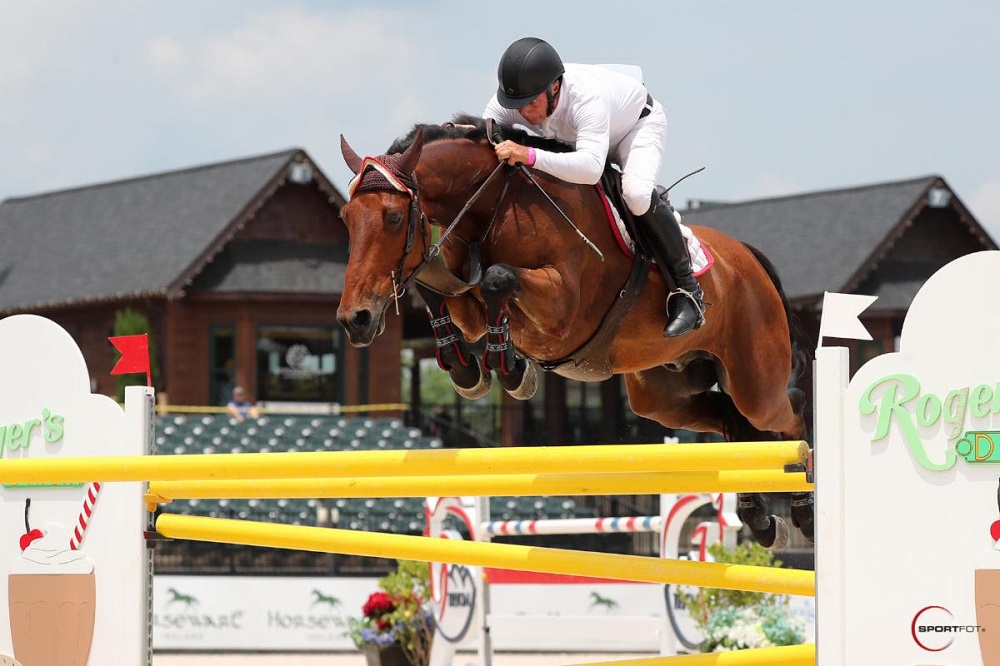 Tryon Summer 4 concluded with a win for Todd Minikus (Lake Worth, FL) and Calvalou, stopping the jump-off timers in 34.762 seconds to best the field at Tryon International Equestrian Center (TIEC). Kristen VanderVeen (Wellington, FL) and Bull Run’s Almighty, the 2008 Hanoverian gelding (Caspar x Quidam De Revel) owned by Bull Run Jumpers Six LLC, combined to produce a 35.398 second jump-off round for second place, while the podium was completed by Ginger Pop, the 2009 Irish Sport Horse mare (Luidam x Cruising), with Alison Robitaile (Upperville, VA) in the irons for Bertram and Diana Firestone clearing the short course in a time of 35.592 seconds.

Minikus and the 2007 Oldenburg gelding (Calvaro F.C. x Baloubet du Rouet) owned by Todd Minikus, LTD were able to turn and burn across the Oscar Soberon (Dallas, TX) course design to take the win, Minikus explained. “He’s had some nice successes and jumped big classes [in the last year that we’ve had him]. He hasn’t always been able to turn so well in the jump-offs, but lately he’s been turning better, and today he turned fantastically. I couldn’t be happier!”

Though the course was “pretty difficult for a Sunday Classic,” Minikus noted, ten pairs of the initial 31 pairs to test the track returned for the jump-off round, which “was a good number. It makes for a fun jump-off! There were plenty of speed racers in the jump-off with Aaron Vale, Kristen VanderVeen, Rowan Willis, and so on,” Minikus acknowledged. “We’re lucky we caught them!

“The [new engineered] footing has been fantastic,” Minikus continued. “My horses have been jumping on it for a few weeks in a row now, and they feel very comfortable. It seems like they’re turning well on the footing,” Minikus detailed, emphasizing that the ability to turn safely is an important metric to him. “A lot of people tend to worry about the takeoff and the landing, but I personally think that horses can get hurt more while turning than the actual act of jumping. Very few athletes get hurt running in a straight line, but they always get hurt when they make a sharp cut or turn right after landing.”

Like many riders, Minikus is planning competitions tentatively, but will be back next week to challenge Tryon Summer 5 competition, he concluded. “We’re taking it one day at a time [with our show plans], but we’ll definitely be here next week!”