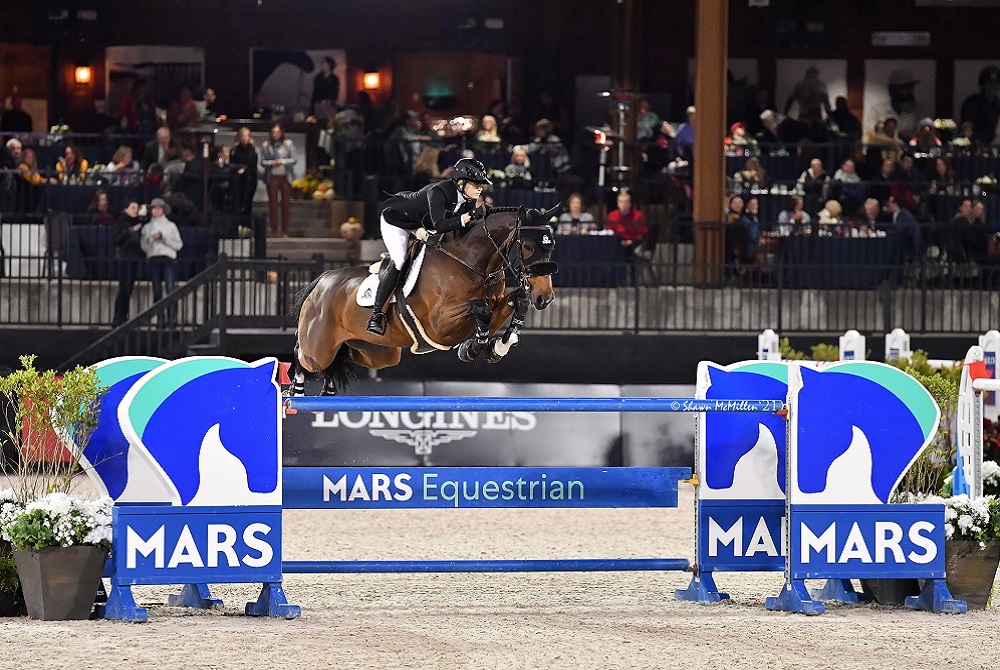 Competition on Saturday, October 30, 2021, came to an exciting finish at the Washington International Horse Show, presented by MARS Equestrian™ as Tiffany Foster (CAN) and Figor, owned by Artisan Farms LLC and Tiffany Foster, won the $215,000 Longines FEI Jumping World Cup™ Washington CSI4*-W for the President’s Cup, presented by Mars Equestrian™.

Out of 33 first-round entries and four in the jump-off, it was the last combination to go, Foster and Figor, who would stand in the winner’s circle.

First in the jump-off was Alex Granato (USA) on Carlchen W, owned by The Bright Lights Group. They had the fastest jump-off time in 35.01 seconds, but a heartbreaking rail at the final jump left them with four faults in third place.

“I had a bit of a setback with Carlchen in September,” said Granato of the 13-year-old Mecklenburg gelding by Chacco-Blue x Continue. “We had some trouble with his foot at the [Spruce Meadows] Masters. I've been spending the last few weeks since then building him back and making sure he felt confident, and luckily, I know him well enough to step back up tonight. I tried to let his natural speed carry me. Typically, I probably would have kept going and done one less and had a little more room at the last jump but just with building him back up I took a little bit of caution. It worked against me which was unfortunate. These girls jumped beautiful rounds, and I certainly wasn't trying to be third, but they definitely deserve where they are at.”

Next in, Karl Cook (USA) and Caillou, a 14-year-old Holsteiner gelding by Casall x San Patrignano Corrado owned by Signe Ostby, had an unfortunate refusal at the first jump. They regrouped to finish with four faults in 45.86 seconds for fourth place.

Alessandra Volpi and her own Berlinda were the first to record a double clear, finishing in 36.52 seconds that would end up in second place.

“It's incredible to be competing with people like this that I've watched growing up and never thought I'd be sitting next to being interviewed,” said the 21-year-old Stanford University student. “I'm really excited. It was one of my first big jump-off classes. I got this horse recently and she's been absolutely incredible for me so I'm looking forward to keep going with that.”

Volpi has been riding Berlinda, a 13-year-old German-bred Warmblood mare by Berlin x Gento, only since April of 2021. They finished fourth in the American Gold Cup, but then Volpi returned to school for five weeks.

“I was a bit nervous to come back and go straight into these big classes, but I think we work really well together,” related Volpi. “We have similar attitudes, I think, and similar sizes. I'm lucky to have her.”

The final pair to go, Foster opened up Figor’s giant stride and left a stride out of the final line. They crossed the timers in 35.73 seconds for the win.

“I know he has a huge stride, and it would probably be a risk for most to do nine [strides] to that last jump, but I knew my horse would just eat that up and that would really suit him, so that was really in my favor tonight,” explained Foster.

It was a gratifying win for Foster with Figor, an 11-year-old KWPN gelding by VDL Groep Zagreb x Indoctro that she has been riding for four years. She and her team, including groom Caroline Holmberg and veterinarian Dr. Eduardo Felix, brought back Figor from an injury at the end of March earlier this year.

“He feels in awesome form,” said Foster. “I was really aiming for this horse show as his first time back out in the 1.60m, and I think he's ready! I'm thrilled to have him back, and I'm really, really excited about the next few years with him.”

Course designer Bernardo Cabral (POR) commented on the class, “They had a lot to jump. It wasn't super big, but it was careful in many places. I'm very happy with the result.”

This was the second year for WIHS at the Tryon International Equestrian Center, but the 2021 edition included the full schedule of classes. “We are thrilled,” said WIHS President Victoria Lowell on this year’s event. “The Tryon team has been incredibly welcoming and accommodating, and we have so enjoyed working with them. It was great to have the support of the riders and Longines and MARS Equestrian™. We are just grateful that we could carry on outside of the city in North Carolina.”

For her victory, Foster was presented with The President of the United States Perpetual Cup donated by First Lady Jacqueline Kennedy.