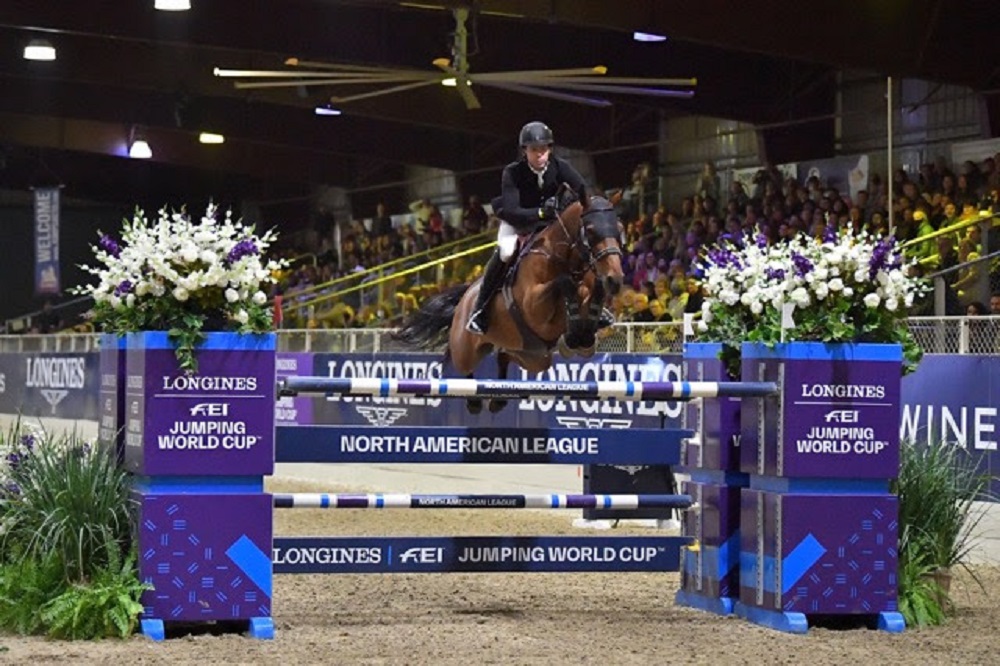 Swail and the enthusiastic 12-year-old gelding topped a thrilling four-horse jump-off in front of a packed crowd at the Murieta Equestrian Center. Using his mount’s natural footspeed and agile turning, horse and rider seemed to read each other’s minds as they left out strides and shaved more than a second off Erynn Ballard (CAN) and Huberth B’s then-leading time. Swail and “Vinny” crossed the timers of Anderson Lima’s (MEX) shortened track in 36.12 seconds.

"He was wonderful here tonight....probably one of the favourites coming in. I'm delighted he's living up to the reputation he's making for himself."

Conor Swail (IRL): “He was wonderful here tonight,” Swail said of his mount, who has now won five grand prix contests since June. “He was probably one of the favourites coming in. I’m delighted that he’s living up to the reputation he’s making for himself.”

Ballard settled for second with her brand-new mount, an impressive feat considering she’d only begun riding the eye-catching bay two weeks ago; their time was 37.25 seconds. Her student Natalie Dean (CAN) and the talented Cocolina finished third as the only other double-clear performers on a time of 43.09 seconds.

“Erynn put up a tough enough round that I thought it was going to be another tough test,” Swail said, “but [my horse] handled himself extremely well.”

His World Cup results have now spanned two countries and two drastically different venues. In Vancouver, the duo navigated a spacious outdoor arena, while in Sacramento, they were met with a small, covered space. In both places, the pair delighted as Vinny complemented his efforts over the fences with playful bucking in between the fences, a trend Swail has come to both expect and respect.

“[Vancouver] was outside, and [course designer Peter Holmes (CAN)] built it quite like an indoor track I thought, but it’s still a covered arena here, and the crowd is up against you,” Swail said. “[My horse] is answering every question, and the crowd was awesome tonight. It’s wonderful having people back [in the stands]. We get a thrill out of it as well.