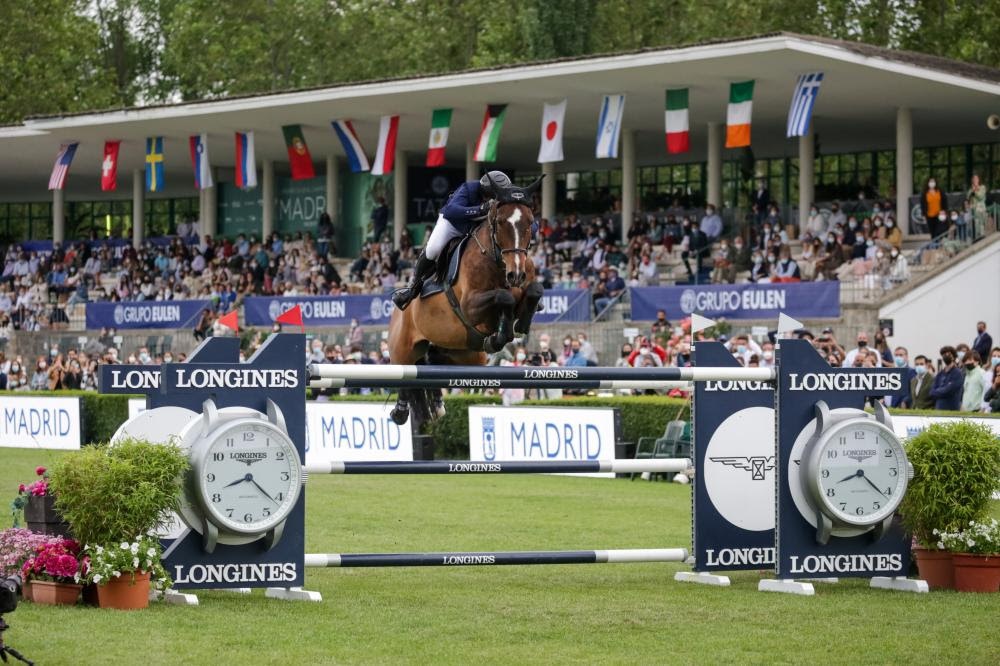 Oliver Robert secured the biggest win of his career today in his first-ever Longines Global Champions Tour Grand Prix victory in Madrid. There was a standing ovation as he landed over the last fence beating 12-time LGCT Grand Prix winner Scott Brash in a thrilling two way jump-off.

Elation written across his face and getting emotional Robert said “ I love to come to Madrid so much. I am always second, I've never won a 5* Grand Prix before and today it was a tough one against one of my favourite riders Scott Brash, I am so happy it is such a fantastic day for me and my team.”

Confidently he explained why he thought he could win today. “I think I was able to do it, as Scott was fast but not as fast as usual. We haven’t seen people for over a year and a half so it is fantastic to win today.

Speaking about qualifying for the Longines Global Champions Tour Super Grand Prix, taking place at the GC Prague Playoffs this November Olivier said: “To be there with all the champions, I am not a champion myself, I don’t understand how I am here winning here, it is just incredible for me.”

Ranking leader going into this second leg Niels Brynseels didn’t qualify for today’s LGCT Grand Prix costing him seven placings in the overall season rankings as he fell to 8th place with 40 points. Now leading the championship race is Scott Brash on 68 points with Bart Bles and Olivier Robert in hot pursuit on 63 and 60 points respectively.

It was a fascinating battle as the Frenchman took on the Brit after only two combinations managed to post a clear around the technical and testing 1.60m course designed by Spanish course designer Santiago Varela Ullastres.

From the 34 starters in the first round, faults were cropping up all around this varied track: at the Longines combination, at the final fence and the tricky double across the arena. The time was not so influential as only a few riders got caught out picking up a single time fault.

But it was the open water that caused the most problems today. There was drama as Constant van Paesschen parted ways with Isidoor van de Helle, both walked out of the arena okay and ready to try again another day. Shortly after both Billy Twomey with Lady Lou and Mike Kawai on Celvin had refusals. But it was the last to go 2018 & 2019 LGCT Season Champion Ben Maher with a surprising elimination at the water after Madame X decided she didn’t want to play ball today.

Penultimate rider Darragh Kenny showed his pure class and looked like he was going clear until the final fence came crashing down costing him a spot in the jump-off but earning him a podium place as fastest on 4 faults in round one. As it is only his second show on the stallion this combination will be one to watch in the future.

The jump-off featured two top combinations and the decider lived up to everyone's expectations.

First to go Scott Brash and Hello Jefferson laid down the gauntlet at the beautiful Club de Campo Villa de Madrid. The experienced combination had an extremely tight roll back to the Marques De Riscal oxer. He then picked up the pace and didn’t check as he flew down the final line to the Longines oxer. Hello Jefferson was jumping his heart out for Brash and piled the pressure on Olivier to go clear in a time faster than 39.26 seconds.

The crowd whistled and cheered as the underdogs Olivier Robert and Vivaldi des Meneaux entered the arena. Straight away pushed the pedal to the metal and at the halfway point he was half a second faster. Turning inside to the Longines upright and on the angle he flew over the final fence to win the biggest Grand Prix in his life by over two and half seconds in a time of 36.74s.