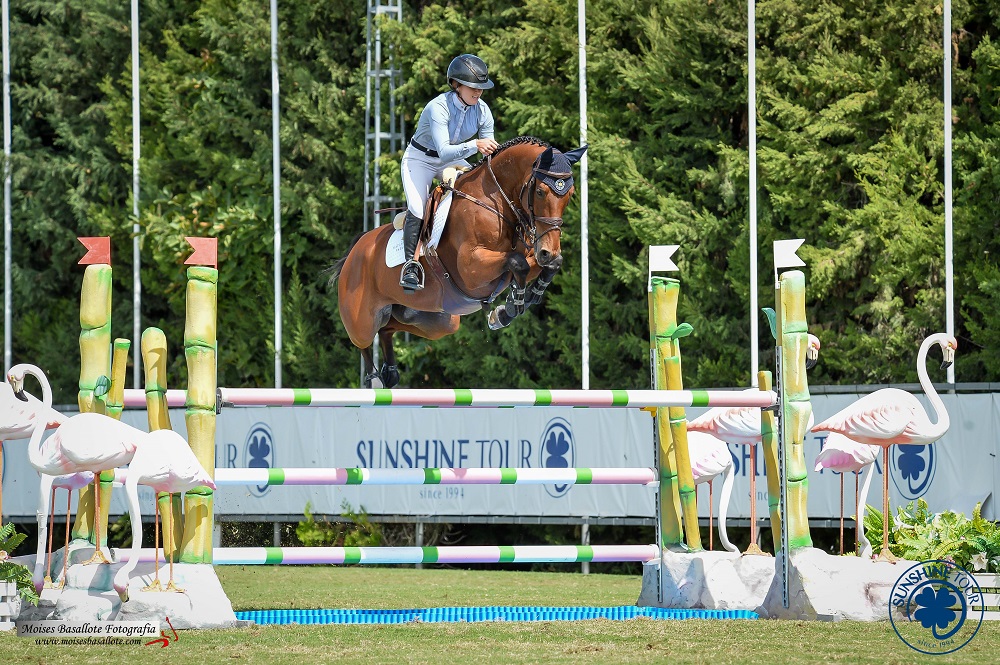 With a jump-off time of just 39.96 sec, Kara Chad rode a sparkling round in the main grass arena, wining the 1.40m, Big A Class, which had 39 entries. Kara took top spot with the very fast mare, Firefly W (Nabab de Reve / Voltaire), beating the American rider, Laura Kraut with Greatfull (Congress 4 / Peking) in to second place in a time of 41.09 sec, this was one place up, from her results in yesterday’s class.

Italian rider, Luca Moneta was the winner of the 1.35m Medium B, which was also jumped in the main arena. Riding Etoile VD Wijnhoeve Z (Eros Platiere / Arpege Pierreville) he was just under one second faster than Kayleigh Watts with Kimosa Van Het Kritrahof (Chatman / Eros Platiere). Third place was taken by the Spanish rider, Ainhoa Manero and Bellefleur PS Z (Berlin / Quidam de Revel). Laura Kraut
once again was on the leaderboard with Haley (Quality Time / Manhattan) in 4th and the Swedish rider, Linda Heed, who has been very successful so far at the Tour, took 5th place riding Chicago de Taillevent (Landor S / Silvio).

The Milton arena was the location for the 1.30m, Medium A class. This time it was an Irish win in a mere 57.09 sec for Tom Wachman riding Cesha Old, who was more than 8 seconds faster than the British rider James Wilson who took second with Forest Quality, in 65.89 sec. In third place and 13 seconds slower than the winner, was the Spanish rider, Fernando de los Santos on Kansas VD Withoeve in a time of 70.15 sec. Spanish riders Jorge Juárez with Coreana and Silvia Diego on Calipso Van de Bergdalhoeve Z, took 4th and 5th please resp’.

It was a Spanish top three in the Small B class with the winner, Fernando de los Santos having a great round on Isba Caps in a time of 51.49 sec just ahead of Alejandro Álvarez and Califa who took second and Manuel Vázquez with M B Siri Six who took third Ariana Rockefeller from the USA took two places on the podium in the Small A Class, winning with Caelle and taking 3rd with Chaccadella. The Venezuelan rider, Clementina Gil slipped in to second place with Jara LB.

It was the last day of jumping this week for the Young Horses. Irish rider, Billy Twomey with the gelding, Pewit Dezoito (A Pikachu de Muse) was the winner of the 1.35m 7yr old class moving up from 6th position yesterday. Second was Charlie Jones (GBR) with Vins Vd Tojopehoeve Z by Vagrant Z moving up one place from the day before; Kara Chad had another success with third place this time riding Irinka Lady (by Etoulon). Spanish rider, Eduardo Álvarez and Ilero finished off their successful week, taking 4th place and local rider Armando Trapote with Alebrije, also had a great ride taking 5th place after a week of clear rounds.

The 6yr old class showed that Julie Welles (USA) is definitely on top form as she won the class with her mare Jacquard who has jumped clear all week. Jaquard is by Kannan and this stallion’s influence on breeding top jumping horses is clearly seen just in this class. David Will from Germany, rode Junior Kannan, in to 2nd place up one place from yesterday. Once again, this young stallion is by Kannan and out of a Diamant de Semilly mare. In third place was British rider Charlie Jones with Just Synergy by Arko III out of a Kannan mare. In 4th place was another British rider, Olivia Skinner riding Costa del Sol and in 5th was the Spanish rider Kevin González on Jabulani.