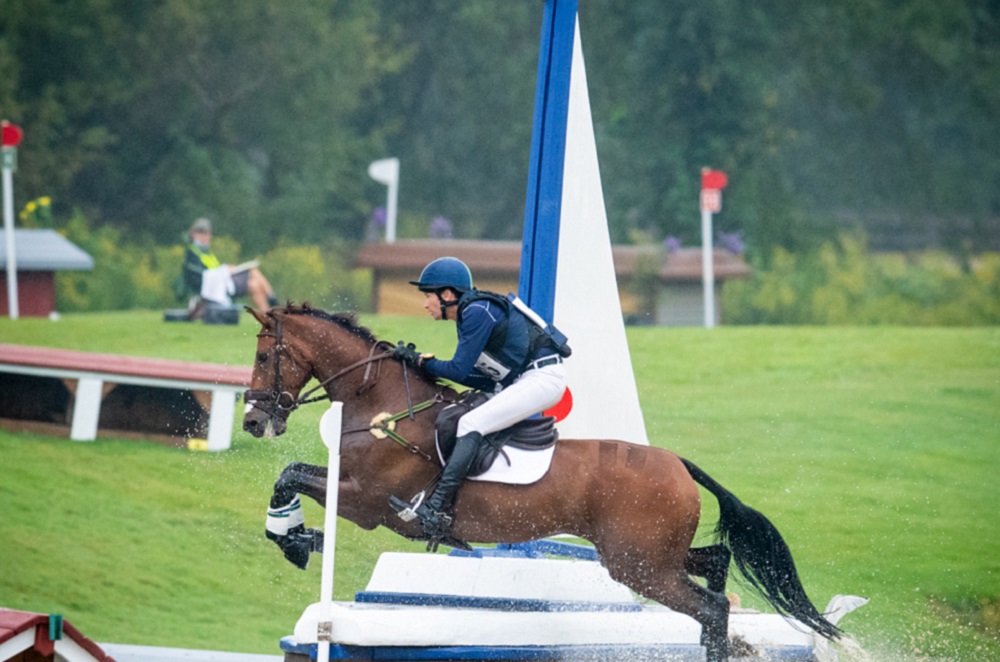 Matthew Flynn (Potomac, MD) flew around the White Oak Cross-Country course with Wizzerd to win the Advanced A Division at the Blue Ridge Mountain Horse Trials presented by EquiSafe Global at Tryon International Equestrian Center (TIEC), ending on a score of 40.90. Bobby Meyerhoff (Statesville, NC) and Fortuna, the 2010 Dutch Warmblood mare (Balou du Rouet x Consul) owned by Robert D. Meyerhoff, improved from sixth to second after Cross-Country, ending on a score of 45.80. The fastest around the track, Katherine Brown (Aiken, SC) only added 2.40 to her score to end up in third on a total of 52.00 riding her own Victor Z, the 2011 Zangersheide gelding (Vittorio x Concorde).

Flynn, who steadily climbed the ranks from fourth throughout the weekend with the 2009 Dutch Warmblood gelding (Wizzerd WV x Oklund) owned by A. Patrick Flynn, Kathleen Flynn, and Merry Go Round Farm, shared that his goal on Cross-Country was a positive preparation run for the Tryon International Three-Day Event to be held at the venue in November:

“I thought it was a good track. It was definitely challenging, but it was sizeable enough that it was rewarding to a good, forward ride, which I think is good preparation for these horses coming back to do the CCI 4*-L here in November. My goal was to do my best to ride the forward lines and stay out of Wizzerd’s way and travel on more than I tend to, which is a goal I’ve been working to improve.”

Flynn started off the weekend with a personal best score on the flat, and credited Erik Duvander for helping them throughout the last year and in the warm-up this weekend. “Dressage was great for him. Erik Duvander was kind enough to help warm me up, and he’s been working with the horse a lot this year. He’s really getting stronger and he put in a personal best for him at that level, so that was really exciting to start off with.” Flynn continued, “Show Jumping last night was really super. I was really happy with him in the Tryon Stadium. I came here a couple weeks ago with my buddy Doug [Payne] and have been doing some jumper shows on the road with his gang and working on that phase the past month or so, which felt really paid off, and I was happy with his round.”

Looking ahead to November, Flynn noted that getting some runs on the White Oak Cross-Country Course for the first time will serve him well when he returns: “Obviously it’s great to have the horses gallop on the terrain and see what it felt like. This was my first time running the event here in general, so that’s extremely valuable, and I think also in November I will continue to work to even ride more forward.” Flynn concluded, “I thought the facility and the organizers put on a great event here, and everyone was really awesome. The facility is amazing.”

For Meyerhoff, who improved from last place to second throughout the weekend, his effort on the Cross-Country course was his first experience at the Advanced or Intermediate levels at TIEC. “It started out very nice, until fence five where I had a little hiccup, and the mare did an amazing save there, and we kicked on and got our groove back. From then on, the course jumped fairly nice. It was big and bold, and I felt the mare change her way of galloping and jumping the big tables, and she took me and felt great.”

“I did lots of preparation for the Show Jumping in order to jump clear here, and that work paid off,” he shared of his jump up the standings on day two. “I thought she was amazing. That helped us move up [the ranks] quite a bit, and then today’s round even more.”

The Blue Ridge Mountain Horse Trials presented by EquiSafe Global were on his calendar a long time ago, but the announcement of the November CCI4*-L being added to TIEC’s calendar provided him an even better opportunity to prepare than he originally expected:

“I had plans to do the 4*-L before it was moved here, so I wanted to come here as a fitness run to get ready for that. When they announced that the 4*-L would move here, I thought it would be even better to come, and even more positive to be able to run the horses here that we could bring to the 4*-L. It worked out well for us.” Meyerhoff concluded, “after this weekend, I have a really good sense of the ground, the terrain, and how the course rides with the horses. That’s definitely an advantage to having not run it.”

For Brown, her successful tour of the course was both redemptive after last fall’s incomplete and preparatory for November as well, she detailed. “I thought the course was a little bit bigger than I was expecting a year ago, and I didn’t make it past fence nine. I retired, so my goal this time was just to come out and have a nice run around and have an idea of how it would feel in November for the 4*-L.

“My horse has a tremendous gallop, and I never looked at my watch,” she admitted, “but he just covers the ground so easily. I have a better mental image now. I’ll keep truckin’ along with some more fitness work and hopefully we’ll be back here in the fall a little bit later.”

Will Coleman and Chin Tonic HS Top Open Intermediate A Division
In the Open Intermediate A Division, Will Coleman (Charlottesville, VA) continued his winning streak by clinching first place overall aboard Chin Tonic HS, owned by Hyperion Stud, LLC, after placing first in all three phases with a final score of 37.20. Lucienne Elms (Campobello, SC) and her own Mistralou rose from thirteenth place to secure second with a final score of 33.80. In third place, Bobby Meyerhoff (Statesville, NC) and Lumumba, whom he owns with The Donovan Group, finished with 41.40.

“The Cross-Country course was great!” Coleman reported of the Captain Mark Phillips track. “I had a really nice go. [Chin Tonic HS] is still a little bit green, but he handled it well. I was really pleased with how he ran. He’s growing up and I’m excited about his future. Mark built a really great track, with plenty of good questions.”

It was Coleman and Chin Tonic HS all the way this weekend, and while he acknowledged that a win felt nice, he’s got his eyes on the future ahead:

“It’s always nice to go home with a win, but more importantly, all of the horses behaved well and they’re happy about their job. In Chin Tonic’s case, he came out of it with a really good taste in his mouth.”

Like many top-level competitors competing at the Blue Ridge Mountain Horse Trials presented by EquiSafe Global, Coleman will be returning in November for international competition at TIEC with a recent positive experience coming with him. “Hopefully we’ll just keep moving him up. It’s a long race and we’re nowhere near the finish line so to speak, but he keeps going in the right direction and we’re happy about that. I’m pleased for the horse and pleased for his owners. Hyperion Stud has been a great supporter of ours,” he concluded.