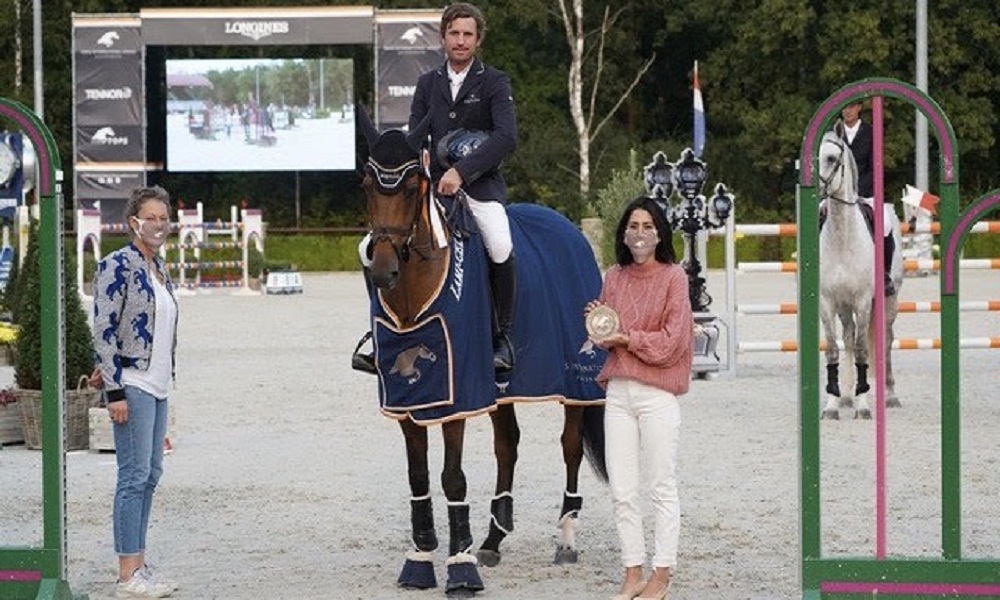 Darragh Kenny (IRE) stormed to a decisive victory with a breathtakingly fast clear round in tonight’s CSI5* qualifier for the GC Grand Prix of Valkenswaard Presented by TENNOR partnering a new horse, Belo Horizonte. The top 35 riders are now qualified for tomorrow's feature class and the race will be on to take the title in this prestigious one-off competition.

Speaking after his win, Darragh said “I'm very happy, I was very happy with how the horse jumped today. It's nice to have a win here in Valkenswaard, and I look forward to the Grand Prix tomorrow.

"This is one of the best showgrounds in the world, it was fantastic show jumping today and it's great to be able to be back at a high level."

Poles fell around the twisting course as riders fought to finish in the top 35 and qualify for tomorrow’s Grand Prix, with 21 combinations finishing on a clean sheet.

First to go in this testing qualifier was Bart Bles (NED) and Kriskras DV, the pair keeping all the poles up but falling foul of the tight time allowed in this class against the clock, picking up one time fault.

Next in, Jos Verlooy (BEL) and Igor had a plan from the start to take all the tightest turns which landed them high up on the leaderboard at an early stage. Following him into the ring was the flying Frenchman Julien Epaillard (FRA). Despite being known for his speed, unfortunately it wasn't Julien's day today and the pair finished with 8 faults knocking them out of contention.

An early lead would go to Max Kuhner (AUT), who jumped a careful round with the 9-year-old Elektric Blue P in 76.67 seconds. The poles would keep falling for the next 8 riders, with Shane Breen (IRE), Maurice Tebbel (GER), Maikel van der Vleuten (NED) and Jane Richard Philips (SUI) all picking up four faults.

Christian Ahlmann (GER) and Take A Chance On Me Z showed all their class to seal the third clear round of the competition, jumping carefully through the double that had caught out a few earlier riders.

Just one unlucky pole fell for Lucas Porter (USA) with C Hunter, but the pair finished with a competitive time of 75.23 seconds, and stand him in good stead for qualification for tomorrow’s Grand Prix.

Edwina Tops-Alexander (AUS) would take the next clear round with Identity Vitseroel in a time of 77.52 seconds, sealing her place in the increasingly competitive Grand Prix. Harrie Smolders (NED) also posted a solid clear round to qualify, demonstrating impressive scope with Dolinn.

Next to go Simon Delestre (FRA) had his foot to the floor with the consistent Hermes Ryan, pulling off a blisteringly fast round to take the lead in 70.72 seconds - almost 6 seconds faster than previous leader Max Kuhner. However, he wasn’t to hold on to the top spot for long as his compatriot Kevin Staut (FRA) pulled off an even faster clear round in 69.32 seconds.

Scott Brash (GBR) entered the arena looking to replicate his success from the previous CSI5* class, and achieved his goal of qualifying for the Grand Prix with a stunning clear round in 75.13 seconds with Hello Jefferson, putting him in eventual ninth place.

Darragh Kenny (IRE) would shake up the standings further at this stage with a spectacular fast clear with Belo Horizonte in 67.79 seconds, catapulting them to the top of the leaderboard. Following him, Henrik von Eckermann (SWE) clinched another clear round, and while not challenging the leaders on time, he too secured his place in Saturday’s Grand Prix.

Jessica Springsteen (USA) jumped a careful round, taking care over the tricky Tennor upright, and jumped clear over the fences picking up just one time fault to stay within the qualifiers.

Anna Kellnerova (CZE) brought her talented mare Catch Me If You Can OLD to this challenging course and pulled out all the stops to finish with a zero score in 12th place. She was followed by Emily Moffitt (GBR), whose foot-perfect round with Winning Good also saw her sail into the top end of the pack and look ahead to the Grand Prix.

A shock result would come from Martin Fuchs (SUI) and The Sinner, the talented pairing finishing on 8 faults and outside the top 35. Towards the end of the class the super consistent combination of Pieter Devos (BEL) and Claire Z rode an extraordinary round from start to finish to earn himself a coveted spot in the GC Valkenswaard Grand Prix presented by TENNOR tomorrow.

The top 35 will line up to do battle for podium placings in the GC Grand Prix of Valkenswaard Presented by TENNOR tomorrow at 16:30 CET.