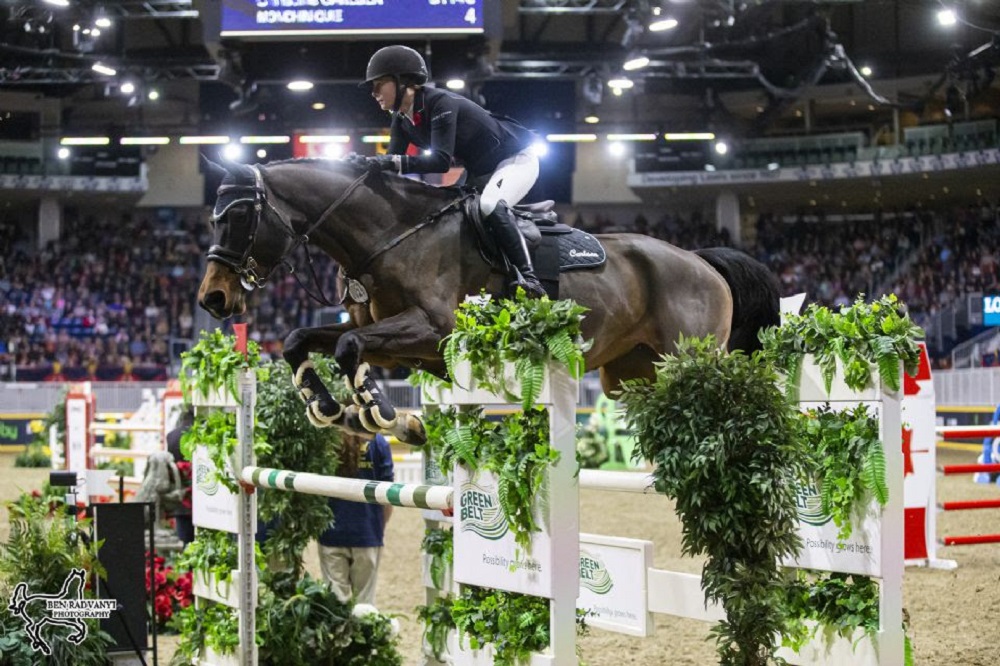 Christine Carlsen of North York, ON, exceeded a goal she set for herself at the beginning of the year by winning the $10,000 Champion Shavings Junior/Amateur Jumper Royal Stake on Saturday, November 3, at the Royal Horse Show, held as part of the 97th Royal Agricultural Winter Fair in Toronto, ON.

From a two-horse duel in the jump-off, Carlsen, 20, and her mount, Monchiniquie, were the only pair to produce a quick, double-clear result over tracks set by Canadian course designer Michel Vaillancourt. Alexandra Millar of Bolton, ON, settled for second place behind Carlsen after a rail fell for her and Vampyr van de Rib over the short course.

“At the beginning of the year, you always set a goal for what you want, and for me it’s always The Royal,” said Carlsen, who trains with Jonathon Millar and Kelly Soleau-Millar out of Millar Brooke Farm based in Perth, ON. “It’s such an honour to show here and momentous for a Canadian because it’s what everything during our year leads up to.

“I’m so happy I got to be here, but it’s incredible to win because all I was hoping for was to have a solid show,” continued Carlsen. “After we walked the course, we knew it was going to be difficult. I tried to ride the best I could, and I was lucky that she jumped as well as she did.”

While balancing her time in the competition ring with her third year at Queen’s University in Kingston, ON, Carlsen has built a strong partnership with Monchiniquie, owned by Valhalla Equestrian, throughout their two year partnership. “She’s a lot colder than what you expect from a jumper, and it took a lot of work on the flat to get us where we are,” said Carlsen of the 10-year-old Holsteiner mare (Cristo x Coriano). “We aren’t the fastest, but she can cut corners to be quick in the jump-off. That’s what helped us today.”

Carlsen will also pilot Monchiniquie in The Uplands Under 25 National Championship next weekend at the Royal Horse Show.

Rounding out the podium positions in the Champion Shavings Junior/Amateur Jumper Royal Stake, Sierra Mark of Augusta, ON, and Heat Wave 3E took third and were named champion of the three-class division after consistent top placings throughout the weekend.