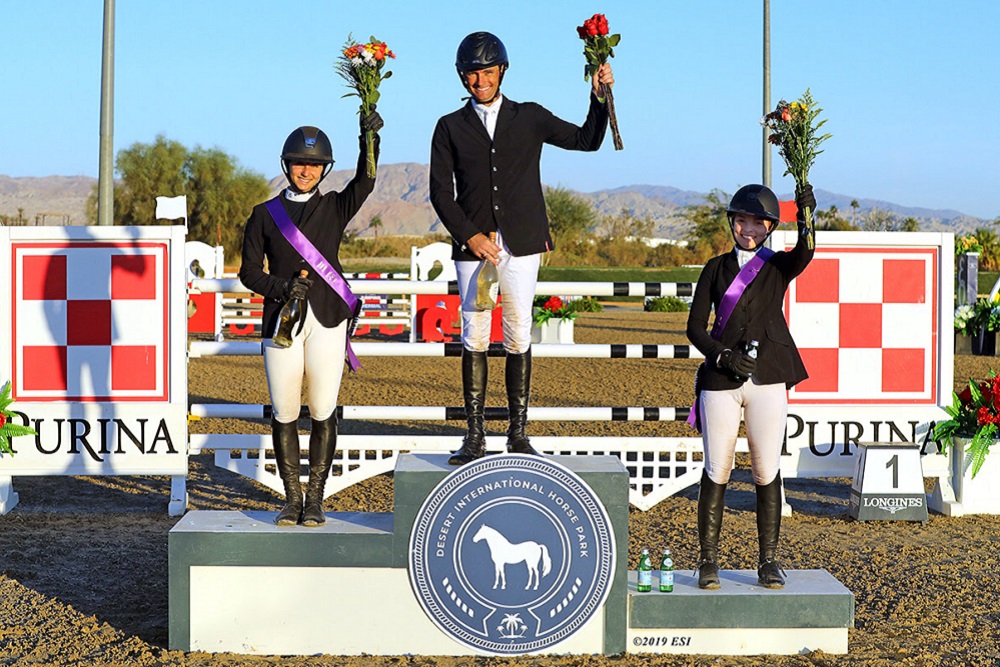 With over eighty entries, it was Ireland's Captain Brian Courname who led the victory gallop in the $40,000 Desert Classic, presented by Purina Animal Nutrition. Eleven competitors were clean, and nine returned for the jump-off. Adrienne Sternlicht (USA) took the lead with Starlight Farms LLC's Bennys Legacy, after riding the shortened course clean in a speedy 43.43 seconds. Eighteen-year-old Alessandra Volpi (USA) came close to catching Sternlicht on her new Selle Francais gelding Taiwan du Landey. This is the pair’s first show together, and they completed it double clean in 43.83 seconds. Courname aboard his eleven-year-old Irish mare Penelope Cruz were last to go. Knowing exactly what he had to do, without fault the pair ticked the timers in a quick 43.28, edging Stermlicht out of the lead, and pushing Volpi into third place.

"She has been a great 1.50m horse and has jumped a few grand prix classes, as well will jump in the World Cup here on Saturday,” Courname said. “The course was a great 1.50m track, it was certainly up to standard with only 11 clears out of almost 90 horses.”

Sternlicht also praised the Alan Wade designed course. “I am a huge fan of Alan Wade’s building. I think he is one of, if not the best course builder in the world. It shows having a field as big as he did today and having poles falling everywhere.” And of her mount, she explained that they are a relatively new pair. “This is actually my third show with him so he is a very new ride. This only my second jump-off with him, so we are still trying to learn the ropes but he jumped great.”

Forty horses and riders from this class will qualify to compete in the feature FEI CSI 3*-W event of the week, the Longines FEI Jumping World Cup™ Thermal on Saturday, November 7, 2019.