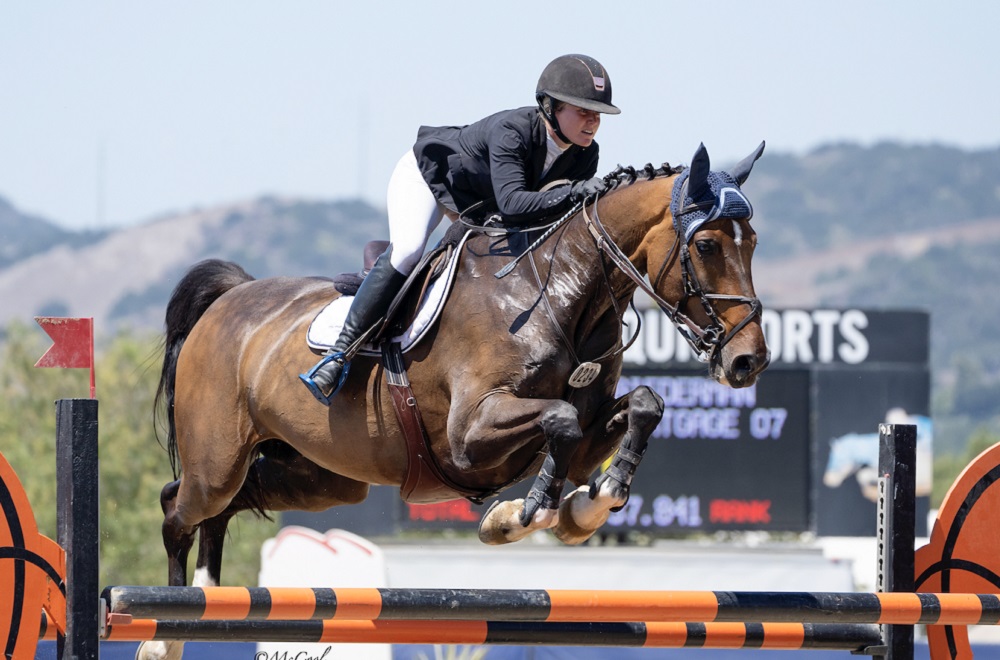 Alexandra Biederman and Interactive Mortgage 07 had been knocking at the door of a Bronze Tour victory throughout the week at the Blenheim Racing Festival, and on Saturday, July 31, the duo got their win in the $15,000 1.40m Bronze Tour Jumper Classic.

Biederman and the 14-year-old Oldenburg gelding were one of four entries from the 11- horse field that qualified to jump-off over the Olaf Petersen-designed track. When Biederman entered the ring, each returning rider had bettered the last, and the time to beat had been set at 37.841 seconds by Hanna Mauritzson and Unique Star. Interactive Mortgage 07, however, made quick work of besting that time, crossing the finish in a winning 34.995 seconds.

Third place behind Biederman and Mauritzson went to Daniel Zilla and Venice BF, who finished on four faults in a time of 35.996 seconds. Rounding out the top four with four faults and a time of 37.135 seconds were Natasha Traurig and Va Voom.

“[Interactive Mortgage 07] has jumped up to 1.50m internationally, so he has quite a bit of experience under his belt,” said Biederman. “In a class like this, it’s nice to go on a horse that you know that you can turn on and go fast because he knows what he’s doing.”

While Biederman only began officially riding for owner DeLong Equestrian Ventures in November 2020, eight months ago was not her first time riding Interactive Mortgage 07.

“It’s a funny story with this horse; I actually rode him about four years ago,” explained Biederman, who spent two years working and riding in Germany before returning to the U.S. in 2020. “He was imported from Ireland for a trainer that I worked for, and the DeLongs bought him. I rode him a few shows when they first bought him before I moved to Europe. So, I actually have a previous relationship with the horse, and I really adore him. I think he tries hard for me, and I understand him. I think we work really well together.”

Biederman continued, “I thought it was quite a good first course, and it asked a lot of interesting questions. Olaf is quite a good course designer. There’s always real thought behind where each jump is placed. Once I jumped the first round clean, I knew in the jump off with this horse that I could really go fast.”

In addition to owning the quick Interactive Mortgage 07, the DeLongs have been strong supporters of top-quality equestrian sport in Southern California, including through their sponsorship of the Interactive Mortgage "Ticket to Ride" High Performance Jumper Series at Blenheim Equisports, which concludes with a $100,000 finale this fall.

Since beginning to ride for the DeLongs out of their California base, Biederman has enjoyed competing at Blenheim EquiSports.

“It’s a great venue and a great horse show, and I’m happy to be here,” said Biederman, who was presented with a Shady Lady neck scarf and a $50 gift certificate to SmartPak as the winning trainer. As the winning owners, DeLong Equestrian Ventures received a Topline Design Ribbon Wreath. “I am really enjoying the grand prix ring classes being held in the sand. I think it offers a different atmosphere, and the horses have responded really well to it.”