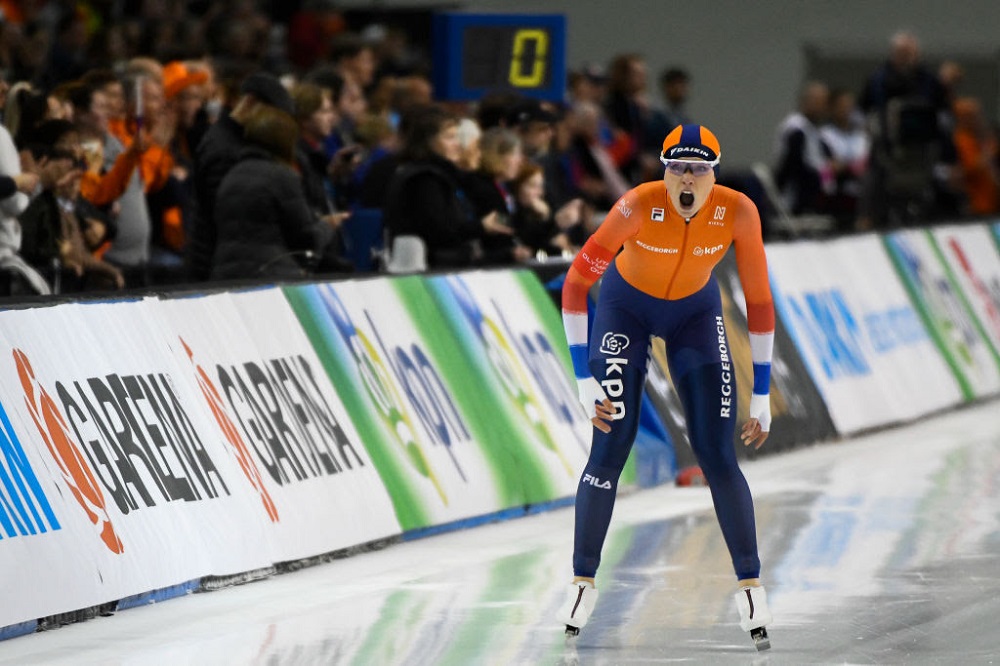 Voronina and Kulizhnikov blow away rivals

On the last 10 occasions it has been contested, Martina Sáblíková (CZE) has won the Ladies’ 5000m title at the ISU World Single Distances Championships, so when she clocked a world record over the distance on Saturday in Salt Lake City, it seemed only a miracle could keep her from claiming an 11th consecutive gold.

That miracle went by the name of Natalya Voronina. After Sáblíková's 6:41.18, the 25-year-old Russian broke the 6:40 barrier with 6:39.02 to seize her first major international title. In the 1000m 21-year-old Jutta Leerdam (pictured) grabbed her first world title, and the first individual gold for the Netherlands, three days into the tournament.

In the men's 1000m Pavel Kulizhnikov (RUS) left the rest of the field shattered. The fastest man ever in the 500m broke the 1:06 barrier in the double sprint distance to add another world record to his tally. The man whose mark he beat, Kjeld Nuis (NED), conceded more than a second to take silver.

Ladies’ 5000m: Records tumble as Sáblíková bows to Voronina
After her victory in Thursday's 3000m, the great Martina Sáblíková faced Esmee Visser (NED) in the fourth of six pairs in Saturday’s 5000m.

The last world record in a classic distance that was skated at the 1988 Calgary Olympic Oval had moved to Salt Lake City, underlining the Utah Olympic Oval's claim of having 'the fastest ice on the planet'.

"My race was optimal," Sáblíková said. "Every lap was the same [time], I'm very satisfied."

Satisfied or not, the 10-time world champion in the 5000m still had to hand over her title to Russia’s flying Natalya Voronina.

After Canadian duo Ivanie Blondin and Isabelle Weidemann had not been able to match the fresh world’s-best time, Voronina took on Marina Zueva of Belarus in the final pair.

Despite having seen numerous skaters wearing themselves out too early in the endurance races over the first two days of the tournament, the Russian set out even faster than Sáblíková had done and maintained her incredible pace to take gold in a world-record time of 6:39.02.

Voronina was confident she would not blow out before the end of the race, as so many had before her.

"When I saw 30.1 after my first full lap I knew that it was fast,” she said. “But the speed came easy so I thought I could keep it up.

"I did not realize that I was faster than Martina. It was only when my coach shouted that I was 2.5 seconds faster after 4600m, that I knew it could be a world record. I thought, ‘if I don't fall, the title is mine’."

Sáblíková was the first to congratulate Voronina after the race.

"This was an incredible competition. I was going to lose this title sooner or later and I'm very happy for her [Voronina],” the 32-year-old said.

"I told her that she's my hero. She skated under 6:40. I've tried to do that five times before and never managed."

Visser, who had followed Sáblíková at a distance in the fourth pairing, took bronze in 6:46.68.

Unlike the top two on the podium, the Olympic champion was not able to pull off a personal best.

"I was not able to coordinate my feet well. It's not the legs it's something in the coordination of my lower legs,” she said. “I don't know why.

"This season has been mediocre for me. I'm going to have to look into it. The gap [towards silver and gold] is just too big."

Having won the European 1000m title on home ice in Heerenveen in January, and played a part in the Netherlands’ Team Sprint gold here on Thursday, the 21-year-old added a first individual world title to her resumé.

The five-time silver medal winner in the 2018 World Junior Championships was the only one who finished below 1:12 at the Utah Olympic Oval on Saturday, stopping the clock at 1:11.84.

Fatkulina, who also took bronze in Friday's 500m, last won an individual title at the World Single Distances Championships in 2013 when she took gold in the 1000m.

The 30-year-old Russian was disappointed not to repeat that feat in 2020 but admitted that watching Leerdam brought back some fond memories.

"I think I can skate at world-record level, but today it just was not good enough,” she said.

"Leerdam’s a young and very talented skater. She seems to be a very emotional girl, which reminds me of the skater I was when I was 20 years old."

The Dutch champion was honored by the comparison.

"I've got to admit that I haven't seen Fatkulina as a young skater. I was very young at the time and I played field hockey. I only started skating when I was 11,” she said.

"But I know what results Fatkulina has set in the past, so I consider [that comparison] to be a real compliment."

"I could have skated [the world record] today,” she said. “The race went well, but there was a mishap entering one of the corners. If I had done that better… but hey, we've got to save something for the future."

Men’s 1000m: Calm Kulizhnikov can’t be topped
Last week Pavel Kulizhnikov predicted a sub-1:06 time in the 1000m, but the combination of pure power and cool composure with which the Russian rocket pulled it off stunned the crowd in Salt Lake City anyway.

Kulizhnikov was in the fourth pair on the ice, skating before the other favorites entered the rink, and none of the others was able to even come close.

"Maybe it [the time gap] was because I skated before the others. It could be a mental thing," Kulizhnikov said.

Nuis, who surrendered the world record he set on this ice little more than 12 months ago, did not skate a perfect race.

"I was too eager at the start,” he said. “I missed every stroke in the opener, it's a real shame. I only started skating after 200m. The last two laps were good, but when you start those laps 1.5 km/h slower, there's just no chance.

"But [even if the opener had been better] I would have skated 1:06.2 or something. It would not have made any difference. Pavel [Kulizhnikov] is in a league of his own.”

Krol finished third fastest, but was disqualified after swerving out of the inner corner and hindering his pair-mate Viktor Mushtakov (RUS).

"I have to respect the result, but I skated that time. I'm gutted," Krol said.

As a result of Krol’s calamity, Dubreuil stepped up to the podium. The Canadian admitted he sympathized with his Dutch rival, having been disqualified himself after having set the fastest time with Gilmore Junio and Antoine Gélinas-Beaulieu in the Team Sprint on Thursday.

"I feel for Thomas,” Dubreuil said. “I was there two days ago and it was not a fun day after that. Thomas is an amazing skater and I hope he bounces back and wins tomorrow in the 1500m.

"Nonetheless, I'm happy about my race… more than half-a-second off my personal best. I skated maybe the best race of my life and I got lucky as well.

With their first-ever medal in the Team Pursuit the Japanese men follow in the footsteps of their female compatriots, who have dominated this event over recent years and retained their title in world-record time on Friday.

"This was a race by the book," De Vries said, despite the Dutch skating in a different line-up to the one they had planned.

"We discussed it last night, and this morning I looked Patrick in the eye and I thought we just shouldn't do this to him, nor should we do it to the team."

It is a sign of the strength in depth within the Dutch team that the loss of such a high-profile figure did not derail their plans.

"It's a pity for Patrick," Bosker said. "But I'm grateful for the chance to skate a world record here."

Kramer said: "It's the national coach who takes that decision, but we all agreed. We all like each other just the same and I'm glad it's the coach who has the final word, so we skaters can look each other straight in the eye.

"We have four good skaters in the team. Unfortunately, only three can skate but all four have the ability to skate a world record."