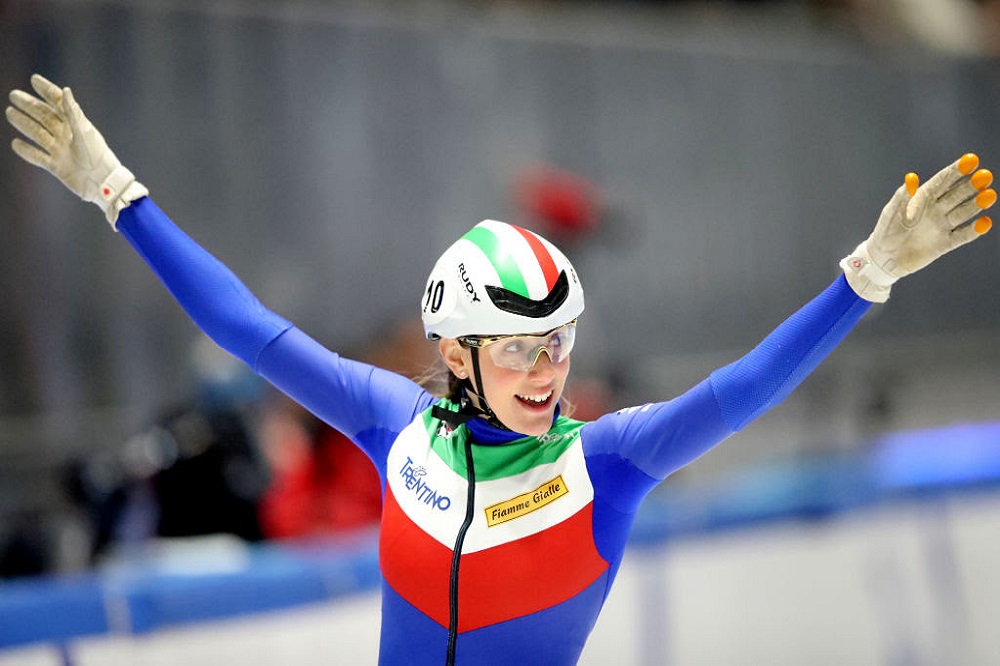 A pulsating ladies’ 500m final was the highlight of a dramatic final day full of home success as the 2018-19 Short Track speed skating World Cup season ended amid jubilant scenes in Torino, Italy.

The race between them was spectacular and ended just the way the crowd packed into the Tazzoli Ice Rink wanted, with Valcepina victorious.

“I was so much more relaxed because of yesterday. I could just go for it,” said the 26-year-old, who held off a determined Christie charge to win her third successive World Cup 500m gold medal.

In a dramatic twist Schulting fell halfway through, leaving Biney free to claim bronze in her first ever World Cup A final.

“It’s crazy. I didn’t even think I would make it out of my quarter,” Biney said. “I am just super excited and super happy I was able to skate against these awesome girls, let alone get a medal.”

The 19-year-old’s coach Wilma Boomstra is certain this will be the first of many such medals.

“She is phenomenally athletic, so strong,” Boomstra said. “And she has got so much to learn, so much experience to gather and confidence to get. This will certainly help.”

The skater in front of Biney has long been her hero and, for Great Britain’s Christie, the silver medal was confirmation that she is storming back to her best after a difficult 12 months.

“I feel like every race I have been building momentum and belief,” said Christie, who left the PyeongChang 2018 Olympic Games without a medal and utterly disconsolate. “Today I was trying to go round the outside of the fastest girl here (Valcepina) and after three months off and with a brand new coach that is such an achievement.

“I went for the outside because I need to test myself, learn new skills and that is the only way I am going to win that Olympic medal in three years. If you had talked to me six months ago I would not have been using that word. I am really excited about the next few years now.”

All of which left Valcepina soaking up the crowd’s acclaim. However, it is Poland’s Natalia Maliszewska who claimed the season-long 500m World Cup title, despite failing to qualify for the final after “clicking skates” in the semifinal.

“I am very happy, I wish I could have been in the final but that’s Short Track,” the Pole said. “I feel tired but I’ll rest for the next few weeks and then I’ll be fresh for the Worlds (the 2019 World Championships take place in Sofia, Bulgaria in March).”

Another skater looking towards Sofia is Canada’s Kim Boutin. The PyeongChang 2018 triple medal winner showed her undoubted pedigree by claiming the 1000m gold on Sunday, ahead of Korea’s Choi Min Jeong.

“I know I have the talent to do well but I have to work every time to get a medal,” said Boutin, who is revelling being one of the leaders in a vibrant, youthful Canadian squad.

“All the girls on the team are rookies but they are really strong in training and they help me be strong. I like being the senior, it’s another challenge. We need to build together. We have a good coach, a good structure; everything is for the best now.”

One of those rookies, Alyson Charles, took bronze behind Boutin and Choi, confirming that the Canadians will be ones to watch in Sofia.

But events in Turin ended as they started with the crowd cheering more home success. Led once again by Valcepina, the Italian women’s 3000m relay team brushed aside their lowly world ranking to snatch silver in the final behind the Netherlands.

Valcepina attributed the Italian team’s best weekend of the season to some encouragement she received from some very special fans overnight.

“My daughters drew the podium and put me on top again,” she said of her twin four-year-old girls. “They love to see me race but they always think I win, they think I am a super athlete. I am really excited for the whole team. Now we want the World Championships.”

Korea had topped the podium in eight of the previous nine men’s World Cup races leading into the last event of the 2018/19 season, but after being penalised in their semifinal they could only watch as a dynamic Russian quartet flew to victory.

“It’s amazing, the first gold medal of the season for me,” said 22-year-old Denis Ayrapetyan. “It feels so good to win. We are all friends, we are so close. We spend so much time together: training, eating, playing games, everything.”

The rookie and his team faced the challenge of a determined Japanese quartet and the noise of an Italian crowd desperate to see their team finish with a flourish. They held off both – with Japan winning silver and Italy taking bronze – and Ayrapetyan identified Russia’s talisman Semen Elistratov as key to the team’s success.

“He is so strong, the leader of our team,” Ayrapetyan said of the seven-time European champion, who also anchored the Russian mixed relay team to gold. “Before I was in the team I always watched him and wanted to be like him.”

While Ayrapetyan is hopeful Russia can take such form into next month’s World Championships in Sofia, Bulgaria, it would take a brave pundit to bet against Korea taking home a heavy sack of gold medals.

For the second day in a row, Korean men claimed both individual gold medals, with two of their biggest stars showing their impressive versatility. A day after winning a third successive 1500m World Cup gold to secure the season-long title, Kim Gun Woo swept into the 500m final. But once there, the overall world No.1 found his compatriot Lim Hyo Jun just a little too hot to handle.

“He was too fast for me today,” Kim said of Lim, with a grin.

“I got a great start today,” Lim said. “It’s fun to race with Kim and fun to beat him. I hope we win medals together at the World Championships. I always think just of going fast.”

The pair’s tussle against Dajing in Sofia, Bugaria is set to be one of the highlights of next month’s World Championships.

In the men’s 1000m it was a case of anything Kim can do, compatriot Hwang Dae Heon could do even better. Fresh from taking sprint gold on Saturday, the PyeongChang 2018 500m silver medallist turned his hand to the 1000m and won that too.

“I felt a bit tired but I was able to focus again,” Hwang said. “It’s exciting. All the training I have done has paid off.”

The 19-year-old was accompanied in the final by two of his teammates, Park Ji Won – who took silver and with it secured the overall World Cup 1000m title – and Hong Kyung Hwan. The three-pronged assault made it a tough afternoon for bronze medal winner Steven Dubois (CAN).

“I wanted to be a bit more in the front and went outside to do a little sneaky move but after that they were coming so fast. I was trying to hold them all but I didn’t manage,” Dubois said.

“Still, I wasn’t expecting a medal in the 1000m. It is kind of my weak distance but I went out and got something.”

It capped an impressive weekend for the Canadian, who also took bronze in Saturday’s 1500m.

All eyes now turn to the 2019 World Championships, with Dubois and others no doubt spending the next three weeks working out how to beat the Koreans.