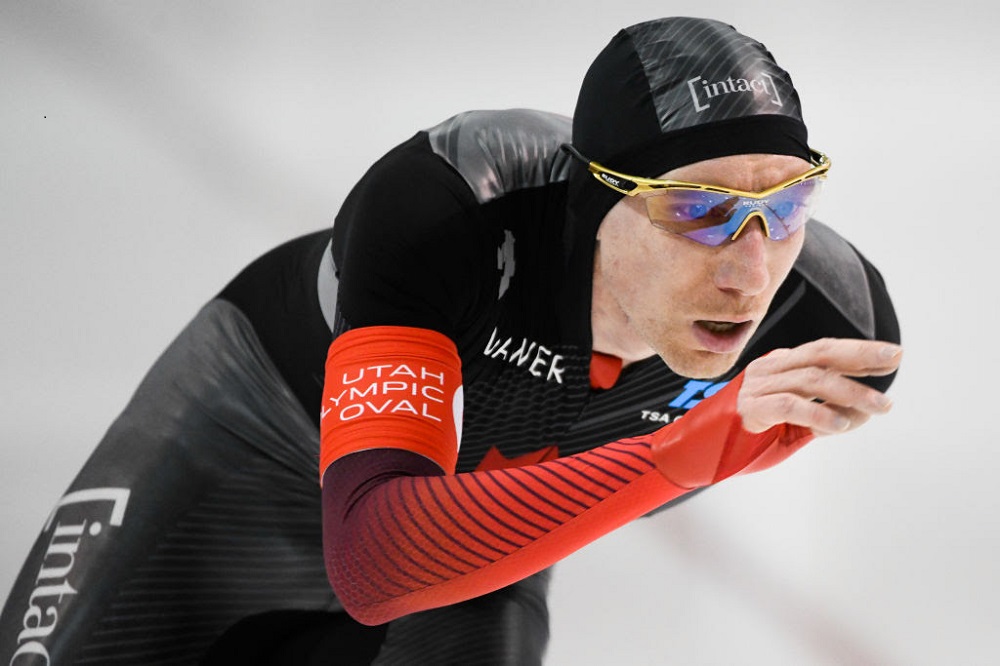 Ladies’ 3000m: Achtereekte goes hard, but serial winner Sáblíková rules the ice
Carlijn Achtereekte (NED) was the first of the favorites to step onto the ice at the Utah Olympic Oval in the Ladies’ 3000m. Having won the Olympic 3000m at PyeongChang in 2018 the Dutchwoman was eager to prove that she was no one-hit wonder.

"As an athlete you want to prove that it was not a one-off," she said.

Before her race she had experienced a similar feeling to the one she had before her golden race in the Republic of Korea two years ago.

"Usually I can be vey nervous, but this time I felt more relaxed,” she said. “I had a feeling that it might well be a very beautiful day."

The 30-year-old certainly got off to a beautiful start. Achtereekte skated almost three seconds under her personal best to set a high bar for the rest of the field of three minutes, 54.92 seconds.

Esmee Visser (NED) faced Italy’s Francesca Lollobrigida in the next pair, but the Netherlands’ reigning European champion started a little slower and was not able to maintain her pace in the last two laps. She finished fifth in 3:56.78, while Lollobrigida ended up eighth in a personal best of 3:58.71.

Russia's Natalya Voronina skated just under Achtereekte's split times for most of her race in the next pairing, but the silver medalist at last month's European Championships paid the price in her final two laps and finished 0.61 seconds behind her Dutch rival, eventually leaving her with the bronze medal.

With just two more pairs to come, Achtereekte began to believe that her time could be good enough for at least a podium spot.

"I didn't dare to celebrate too much [when I crossed the finish line] because I have been celebrating in the past only to end up fourth,” she said.

"It was hard to tell what my time would be worth at the end of the day. I thought 3.53 would be the winning time today, and I was slower."

The current World Cup numbers one and two were up against each other in the penultimate pair: Martina Sáblíková and Ivanie Blondin (CAN).

Blondin took the initiative, but like so many others before she paid the price for emptying the tank too soon, ending up sixth in 3:57.56.

Sáblíková took over the lead, but the world record holder was struggling too. At 2600m she was only 0.12 ahead of Achtereekte's split.

"Then Jac [coach Jac Orie] said that she was going to beat my time,” Achtereekte said. “She always manages to keep her lap times flat towards the end.

"And she's not just anybody… she has won God knows how many titles."

Sáblíková crossed the line in 3:54.25 to add another world title to her already remarkable list of honors. Her success in Salt Lake City brought the Czech skater’s sixth 3000m world title, her 16th title at the World Single Distances Championships and her 21st world title overall.

"I don't know the amount of titles I won," the 32-year-old Sablíková said. "It's always like the first time.

"Winning a world title is never easy. I enjoyed [my battle] with Ivanie [Blondin] and then in the last two laps I had to push with everything I had.

For teenager Kok the senior world championships were a pleasant surprise after she qualified at the Dutch trials in December, but she still has targets for the season and will skate the World Junior Championships in Tomaszów Mazowiecki, Poland, next week.

Men’s 5000m: Bloemen good on fast rinks
Sven Kramer (NED) was the first of the favorites to enter the rink, in the third pair of the 5000m. The Dutchman roared out at world-record pace but could not maintain that speed and after eight 28-second laps he posted four 29-second laps to finish three seconds outside Bloemen's world record in 6:04.91.

Jorrit Bergsma (NED) and Sverre Lunde Pedersen (NOR) were the last two men to skate before the ice-cleaning break, but the Dutchman and the reigning champion were not able to finish anywhere near Kramer, clocking 6:13.42 and 6:11.80 to finish eighth and fourth repsectively.

Jordan Belchos had set a time of 6:12.07 before the break and the Canadian was in second place before the big guns entered the rink.

His team-mate Ted-Jan Bloemen skated in the second-last pair and managed nine 28-second laps before going into 29-seconds in the final three circuits to earn a 0.54 second margin over Kramer at the finish line.

Patrick Roest (NED), who has won all of this season’s 5000m World Cup races, took on another Canadian, Graeme Fish, in the penultimate pairing.

The Dutchman managed to keep up with Bloemen's split times until halfway, but gave way after six 28-second laps to continue with five 29-second laps and finish with a 31.46 for 6:08.59.

Fish had followed Roest at a small distance and smelled blood when his pairmate struggled towards the end. Consistently keeping his lap times under 29 seconds, the Canadian managed to reel in Roest in the final lap to take bronze in 6:06.32.

Roest finished fourth fastest, but was disqualified soon afterwards for not wearing the white armband to indicate his inner-lane start.

"Fourth place or a disqualification, that doesn't make any difference,” the disappointed Dutchman said. “I came here to win and I failed. The legs are not what they're supposed to be."

Kramer had mixed feelings about his silver medal, which arrived after an injury-hampered first half of the season.

"On the one hand I'm gutted, because I play this game to win,” he said. “But on the other I'm proud to have been able to pull this off, regarding the first half of the season."

Bloemen's first half of the season had also not looked too promising. The Olympic champion struggled with his motivation after having taken a sabbatical from the sport.

"He [Bloemen] has not had good preparation and I even told him that he might be better off quitting,” his coach Bart Shouten (NED) said. “But he really wanted to skate here because Salt Lake City is his favorite track. I'm really surprised that he managed to win.

The Utah OIympic Oval is often described as the ‘fastest ice on the planet’ and Bloemen said: "I'm in my comfort zone at fast tracks. It's called speed skating and when the tracks are fast, I'm good.”

Men’s Team Sprint: Dutch get gold after Canadian disqualification
The Netherlands’s men ended up emulating their Ladies trio by winning the Team Sprint event. Canada skated the fastest time in 1:17.63, but Gilmore Junio, Laurent Dubreuil and Antoine Gélinas-Beaulieu were disqualified for an illegal changeup.

"It feels a bit like a stolen victory," Krol said. "We have congratulated them [Canada] for a great skate. They were the best today, but they didn't do it according to the rules, so the disqualification is just.

“But we did not celebrate too much, that would not have been very respectful."