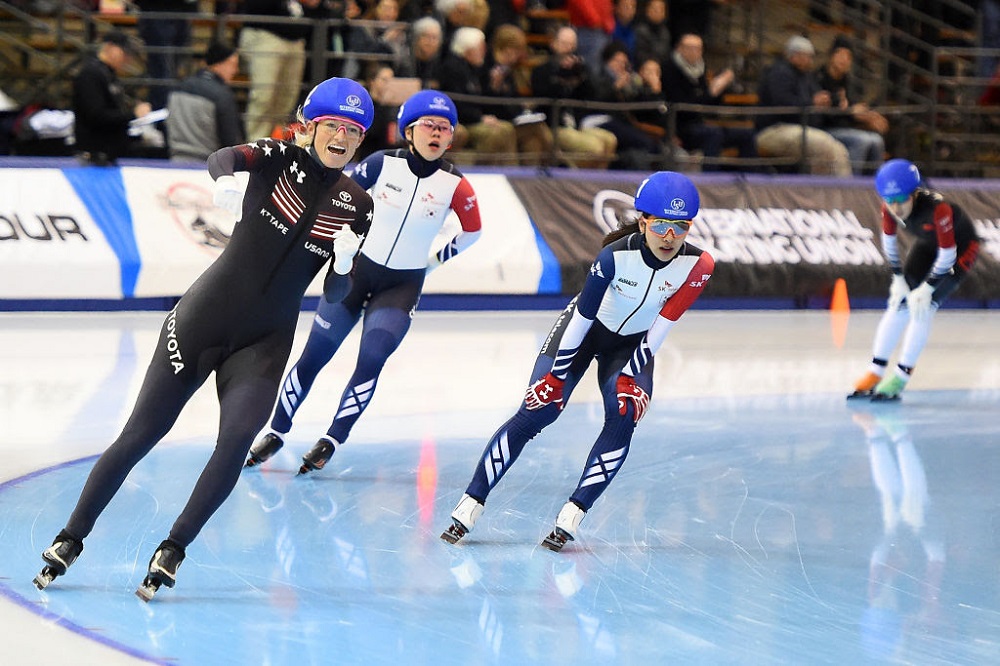 The Republic of Korea ruled the Men's events and hosts USA took the honors in the Ladies’ tournament at the ISU Four Continents Championships at the Pettit National Ice Center in Milwaukee on Saturday. In the Men's Kim Min-Seok won the 1500m, while Um Cheon-Ho and Chung Jae-Won landed gold and silver in the mass start. Brianna Bocox (USA) got the day off to a flying start winning the Ladies' 1500m and Mia Kilburg-Manganello grabbed mass start gold to collect her second title of the weekend.

Men’s 1500m: Kim soars to gold despite jetlag
PyeongChang 2018 Olympic bronze medalist Kim Min-Seok lived up to expectations in the 1500m. Despite five personal best times in the previous five pairings, the Korean did not need to push his own limits to outclass the rest of the field.

Kim stopped the clock at 1:44.56, just 0.9 seconds outside US skater Chad Hendrick’s 2009 track record and almost 1.5 seconds clear of his challengers.

"It was not a bad race," Kim said. "I'm in good condition, but not a hundred percent because of the time difference between Korea and the USA. I arrived in Milwaukee only six days ago."

The current number five in the 1500m World Cup ranking is gearing up for the world championships in Salt Lake City in mid-February, adding: "I'll be ready in two weeks."

Despite his jetlag-hampered performance, Kim was 1.42 seconds faster than silver-medalist Jess Neufeld (CAN. Another Canadian, Jake Weidemann, took bronze in 1:46.49 while his compatriot David La Rue finished just outside the podium places in 1:46.72 to complete a positive afternoon’s racing for Canada’s men.

"I did not have anything crazy in terms of expectations. I just wanted to execute a good race and I landed on the podium. I couldn't be happier."

Bronze medalist Weidemann said: "It's awesome to travel and compete internationally against different guys, at a different venue. I haven't been here in a long time."

"It's a bit nerve wracking [competing against Olympic medalist Kim], but he’s such a nice guy. You want to be competitive with him, but on the other hand it's just so nice to see him do well."

Men’s Mass Start: “You gamble and hope it pays out”
Ian Quinn (USA) had to settle for bronze in the Men’s Mass Start after his late attack on the lead narrowly failed to come off.

Where the earlier ladies race had been a cagey affair, Japan’s Takuro Ogawa made sure that the men's was a more exciting and faster proposition. The 24-year-old attacked after the first intermediate sprint and managed to stay clear of the bunch until the final corner.

Behind Ogawa the Americans, the Koreans and the Canadians shared duties putting their noses in the wind to keep the gap playable before Quinn made his move with one lap to go.

"I shouldn't have probably gone there,” the US skater said. “I could have gone in the last turn, [which] might have been the smarter move, but I was also kind of hoping that maybe the Canadian and my teammate [Ethan Cepuran] might have blocked [the Koreans’] route to go with me.

“You gamble and hope it plays out. I gave it my best shot and I’m happy with the result."

Um Cheon-ho and Chung Jae-won took full advantage of Quinn's acceleration and after having caught Ogawa they overtook the American on the finishing straight.

Delighted to win his first international ISU Championship medal on familiar ice in Milwaukee, Quinn believes the long-awaited Four Continents event is a valuable addition to the racing calendar.

"I grew up skating here. I'm from St. Louis originally,” he said. “I used to come here doing short track when I was growing up.

"I think [the Four Continents] is an important event to gear up for worlds [world championships in Salt Lake City, USA, in mid-February]. The more you allow people to race the better and the bigger the sport can become."

Ladies’ 1500m: Bocox pays tribute to coach Shimabukuro
"It's surreal," Brianna Bocox said after taking her first medal at a major international tournament following an emotional rollercoaster over the last few months which has included the loss of her grandmother and a non-fatal heart attack for Bocox’s coach Ryan Shimabukuro.

"I'm grateful that Ryan is healthy and back coaching,” Bocox said. “He is at home with the rest of our teammates and I will catch up with him in Salt Lake City. He texted me immediately after the race. That made my heart very happy, he's been with me ever since I started."

Bocox' race plan was immaculate, despite the late medical withdrawal of pair mate Bëatrice Lamarche (CAN) forcing her to compete alone against the clock.

After a moderate opener, Bocox skated the fastest two middle laps of the field and managed to maintain enough speed to keep Nadezhda Morozova (KAZ) at bay.

Bocox stopped the clock at 1:57.17, with the 21-year-old Kazak finishing 0.71 adrift for her second silver medal of the weekend after the 3000m on Friday.

Bocox and Morozova each set a personal best to relegate Park Ji Woo (KOR) to third place and the bronze medal in 1:58.44.

"It's nice to be able to skate that race, [to have] confidence in my abilities, [to know] that I can execute a race plan," Bocox said.

Ladies’ Mass Start: Driving ambition for Kilburg-Manganello
It is a long drive from Ohio to Wisconsin, but Mia Kilburg-Manganello's parents will consider the journey from home to Milwaukee’s Pettit National Ice Center as six hours well spent after their daughter celebrated a golden weekend.

The 30-year-old US skater followed up her 3000m title success on Friday by winning Saturday’s tactical Mass Start on Saturday in thrilling style.

"This [race] was not like any other international mass start ever,” she said. "Our record slow was maybe a 50-second lap. It was pretty slow out there.

"Nobody wanted to work, nobody wanted to put their nose in the wind. I figured at that point, about halfway in, that it would come down to the last lap."

After a cagey opening, the excitement began a little earlier than Kilburg-Manganello predicted when Canada’s Lindsey Kent (CAN) attacked with three laps to go.

"That kind of stretched things out and allowed me to open my legs up a little bit," said Kilburg-Manganello, who managed to derail the Korean train of Park Ji Woo and 2018 Olympic silver medalist Kim Bo-Reum.

"They were both behind me with one to go,” Kilburg-Manganello said. “The Korean [Park] came around and jumped both the Canadian and myself, which worked out perfectly because I did not want to take the lead just yet.

“I followed her around, and out of the last corner I was able to come around."