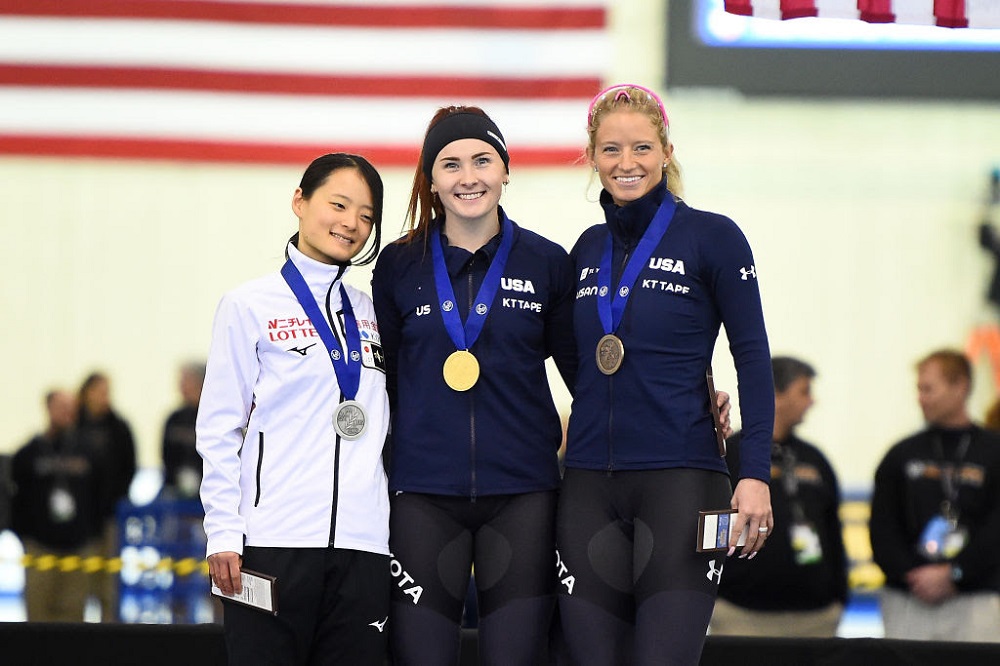 In front of a loud home crowd in Milwaukee's Pettit National Ice Center the 22-year-old US skater took the 1000m title and joined Mia Kilburg-Manganello and Paige Schwartzburg to win the Ladies’ Team Pursuit little more than an hour later.

In the Men's 1000m Kouki Kubo (JPN) and Laurent Dubreuil (CAN) were just 0.002 seconds apart, with the Japanese youngster edging the gold. The Men's Team Pursuit title went to Canada, after Team USA got disqualified, leaving Republic of Korea top of the Men’s medal table with four golds, two silvers and a bronze.

Ladies’ 1000m: Prolonged pace beats explosive power
Bocox faced Friday’s 500m winner Kim Min Sun (KOR) in the penultimate pairing of the 1000m. With the US skater having won the 1500m on Saturday, it was set to be a battle of explosive speed versus prolonged pace.

"I knew she was going to open hard," Bocox said. "I was excited about that. My opener is not the strongest part of my skating, but I knew that if I chased her down I 'd be able to get myself going and get some fast laps in there."

Bocox was trailing by an 0.29 second margin at the 200m split but started reeling Kim in during the first full lap. At the 600m split she was 0.10 seconds behind and with a blistering 29.35 seconds versus Kim’s 30.96 in the final lap she left her opponent way behind.

"I felt a little sloppy, but you can't be too disappointed when you walk away with a personal best," Bocox said.

"To be in front of a crowd that's cheering … we're in the United States so the crowd is big and they're cheering loud. That helps out a lot."

With 28.69 Mia Kilburg-Manganello was the only skater to clock a final sub-29-second lap in the 1000m, but her start was not fast enough to compete for the title. She finished 0.02 away from silver, taking a surprise bronze in 1:16.04 to add to her golds in the 3000m and the Mass Start.

"I wasn't expecting that one at all,” she said. “I told my husband this morning ‘you can watch, but don't expect anything’.

With only three teams starting, it was the US trio of Bocox, Kilburg-Manganello and Paige Schwartzburg who took control, posting 3:02.55 to finish more than six seconds ahead of Canada’s Lindsey Kent, Maddison Pearman and Alexa Scott in second place with 3:08.60.

That result meant that Bocox finished the weekend with three gold medals, while Kilburg-Manganello topped the medal tally by adding bronze in the 1000m to her three race wins.

China were third in 3:14.15 through Ahena Er Adake, Chen Xiangyu and Ma Yuhan.

The 18-year-old Scott, who will compete for Canada at the World Junior Championships in Minsk, Belarus, in two weeks’ time, was happy with her team's performance.

"This was our first race as a team together and I'm really excited about how we did,” she said. “We communicated well and that was our goal.

"It [the ISU Four Continents Championships] is great. The European Championships is a big thing and I grew up watching that. I think it's great that we have the equivalent for the rest of the world now.

"And it was a great opportunity for me to compete against some seniors, even if it's just half of the world."

Men's 1000m: “The better skater” takes it by a whisker
In the Men's 1000m only three skaters managed to break the 1:09 barrier. Kim Jin-Su (KOR) was the fastest with two pairs to go, clocking 1:08.84 in the sixth pairing. The 27-year-old eventually had to settle for bronze.

Dubreuil entered the rink in the penultimate pair and hammered out 1:08.54, just 0.21 seconds slower than the 2005 track record set by double Olympic champion Shani Davis (USA).

Japan’s Kubo took on Kimani Griffin (USA) in the final pairing with it all to do. He was 0.42 seconds behind Dubreuil's time at the 600m split, before heading into an awkward crossover with his pair-mate in the final lap.

Coming out of the penultimate corner Griffin and Kubo were level at the back stretch and Griffin waited before giving Kubo, who had more speed coming from the outer lane, the priority he was entitled to. It cost the American a disqualification.

"I knew it was going to be a difficult crossing, but I knew I was faster," Kubo said. "I had a similar situation at the World Cup in Nagano [13-15 December] and because of that I could handle it better here."

The 20-year-old did not let the incident affect his race and maintained his high speed into the final inner corner to clock a furious final lap of 26.87, which added up to the same time Dubreuil had just skated.

Both skaters waited for the scoreboard to confirm the result.

"They put him first and me second, but sometimes they change it," Dubreuil said. "But the longer it took, the more I thought I probably got beaten.

"Two-thousandths, it's close. But long track is fair, he beat me. It's not a lot, but he was faster than me. I'm still happy with my race. The better skater beat me today.

"I was rusty. I hadn't raced in six weeks after Japan [World Cup in Nagano]. I wanted to race in January at our trials, but I hurt my groin before the races, and I was prequalified for the World Cup and the world championships, so it was just training races for me.

"Where I live, in Quebec City, there's no oval. They’re building one right now. So before showing up here, in the last six weeks I had skated three times. I trained off ice, with weights, a bit of biking, technical jumps on dry land - but nothing compares to skating.

"That's why I came here. I felt like I really needed to skate and race to shake of the rust before Calgary [World Cup next week] and Salt Lake City [World Single Distance Championships in mid-February]."

Kubo will not skate in Salt Lake City, but the sprinter, who won the 500m Junior World title last year, will travel to Calgary to make his World Cup debut.

"This is a brand new Championships and I'm the first champion,” he said. “It's always nice to be the first on the list."

Hayden Mayeur, Kaleb Muller and Jake Weidemann (CAN) clocked 3:44.36, while the hosts were more than two seconds faster before being disqualified for improper equipment.

"It's a little awkward," Weidemann said. "But it's good to just stand up there and do a good race. I think we're all pretty happy with the way we competed today."

With their World Cup team back home in Calgary, Canada had given their second-tier skaters a chance to shine at the Four Continents Championships and they made the best of it.

"The depth that Canada has got today, we don’t exactly get to do all the competitions that we would like to,” Weidemann said.

“For us, it [the Four Continents Championships] adds another level of competition against international people."

His teammate Mayeur added: "We've done a practice run in this line-up just a couple of weeks ago, but this is the first time we skated together in real competition, where there's medals on the line. But we're teammates and we know each other well

"All three of us are really on the brink of making it into the World Cup circuit. It's all a matter of fighting for a couple of extra tenths of seconds, that's what this sport's all about."

The result left the Koreans top of the overall Men’s medal table, with four golds, two silvers and a bronze from the weekend’s action. Canada, Kazakhstan and Japan finished with one gold apiece.