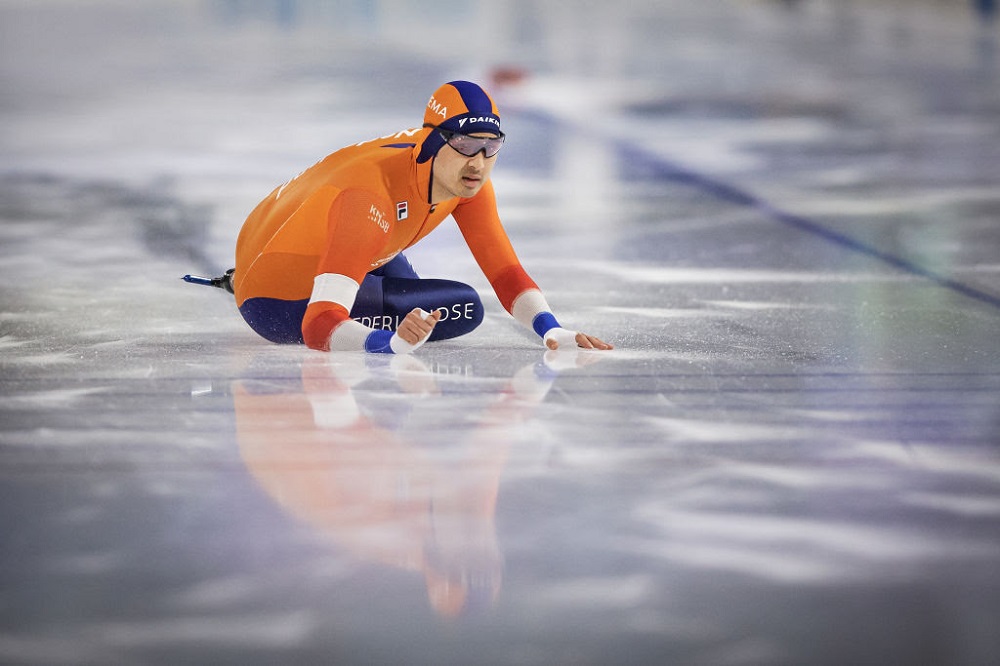 The European Speed Skating Championships are the first of four international events in five weeks in the Heerenveen Hub. The ISU, KNSB (Royal Dutch Skating Association), and House of Sports (the organizing committee) have stringent protocols in place. On the eve of the event, all competitors took a PCR test, and all tested negative for COVID-19. Despite the necessary absence of spectators, the skaters contributed to an exciting competition on the ice.

Bosiek draws first blood
The European Championships weekend kicked off with the 500m in the ladies’ Allround tournament. Poland’s national Allround and Sprint champion Karolina Bosiek (POL) won the event in 38.68 seconds. At last year’s World Allround Championships the 20-year-old also won the 500m, and in Heerenveen she again proved to be one of the fastest sprinters in the Ladies’ Allround field. To be competitive in the international overall classification, she needs to improve in the long distances, however. With 4 minutes and 16.51 seconds she came 16th in the 3000m, to drop to 12th place in the halfway ranking.

De Jong struggling to switch focus
Antoinette de Jong (NED) started the tournament smoothly, skating the 500m in 38.89 seconds to take third place, but she too struggled with the switch from sprint to endurance. At the Dutch trials in December, De Jong had smashed the 3000m track record with 3:57.32, but now had to settle for 4:02.19.

“The 3000m in an Allround tournament is always more difficult [than in single distance format], and I always have difficulties. Maybe it’s because I’m just too focused on the sprinting legs. Switching to the 3000m I just did not have the right feeling, I was not relaxed enough, too much in a hurry.”

Schouten sprints to 3000m glory
Irene Schouten felt it the other way around. Coming from marathon skating, Schouten is an endurance specialist with a formidable punch towards the end. The European mass start champion faced Russian Natalya Voronina in her 3000m race. She was happy with her pair mate but was scared soon after the race started. “She’s the 5000m world champion, so that’s a good opponent, but she started out so fast, it was just way too fast for me. I was happy to be able to keep on pushing and (towards the end) I saw that I was getting closer again. She was very fast in the final lap so I thought just take it as if it’s a final sprint in a marathon race, and I pulled it off.”

Schouten kept Voronina at bay and finished in a Championship record 3:57.95. Voronina took second place in 3:58.62.

The beauty of Allround speed skating
De Jong’s 4:02.19 was enough to place her top of the standings but Schouten jumped to second and the margin heading into the second day is just 0.79 seconds in the 1500m. Voronina climbed to third place, 1.28 seconds behind the leader.

De Jong was a little disappointed with her 3000m display. “That’s the beauty of Allround speed skating. Everybody is different, every tournament is different, every distance is different. Of course, I did not want to lose four seconds in the 3000m but I’m happy to be on top. My 1500m has been good lately and after that I’ll give it my all in the final distance.”

Schouten, who had not expected to be in contention for the title after the first day, takes it one step at a time: “The 500m is the event I feared most and that went all right. I went into the tournament to skate four good races. Could that be enough for the title? I don’t know. We’ll see tomorrow.”

Elizaveta Golubeva (RUS), who came second in the 500m, is fourth overall and has to make up 1.80 seconds to catch De Jong in the 1500m on Sunday. Five-time World champion Martina Sáblíková (CZE) follows in fifth, 3.06 seconds behind.

Roest dominates on first day
Although the Norwegian men started the Allround tournament ambitiously, Patrick Roest (NED) ruled the roost by the end of the day.

One day before the tournament, Sverre Lunde Pedersen (NOR) said Roest would win the Championship even if he were wearing a facemask, but taking to the ice for the 500m he did everything to prove himself wrong. The Norwegian won the 500m in 36.25 seconds and his 21-year-old compatriot Hallgeir Engebråten took third place in the distance with 36.67. Roest came second in 36.39, leaving him 1.40 seconds behind in the 5000m later in the afternoon.

Sleepy Van der Poel surprises in 5000m
Before Roest took the ice in the seventh pairing, and Pedersen in the ninth, Nils van der Poel had set a high bar in the 5000m. The 24-year-old Swede, who took a two-year break from Speed Skating following the 2018 season, almost missed his start. “It was quite chaotic today,” he said. “I was asleep with 15 minutes to go for my race. Sverre Lunde Pedersen woke me up, saying: ‘Aren’t you up soon?’.”

Van der Poel looked at the track to discover he was in quite a hurry but managed to reach the ice in time to skate 6:13.03. His time stood until Roest hammered out a solid 6:10.25, which was two seconds short of his own track record but more than enough to keep his rivals at bay. Marcel Bosker (NED) came third in the distance with 6:15.81, which put him in third overall as well.

Pedersen finished only seventh in 6:19.97 but held on to second place in the overall classification, trailing Roest by 2.50 seconds in Sunday’s 1500m. Although he didn’t think Roest could beat him wearing a facemask, the Norwegian no longer harbored dreams of winning the title: “My 500m was good, but the 5000m… I had hoped for a better race. The remark about the facemask was a little joke. Roest is the big favorite and at the moment there’s just too big a difference in our level in the long distances. He beat me by nine seconds in the 5000m today, but the 1500m is something else.”

Pedersen hopes to improve his level in the long distances over the next couple of weeks: “I’ve beaten Roest before and I know that if my top level is there, I’ve got a chance to beat him. Hopefully I can do it by the end of this bubble.”
Roest was relaxed heading into day two. “I’m in a very good position [to take the title] but I can’t afford to make any mistakes. Tomorrow I hope to show what I’ve got again. I’m not really happy with my 500m, which was a bit sloppy, but I’m glad that I could make up for it in the 5000m.

Verbij gutted
“At this moment, I’m just gutted,” Kai Verbij said after he crashed out of the tournament, just seconds into his race. “That’s sprinting. You take risks and sometimes you blow it. My tournament was over after 50 meters. Actually, my start went very well but then I hit the ice with the point of my skate after some 40 meters. Initially I could correct it but after the second and the third time, the crash was inevitable.” Verbij took second place in the 1000m later in the afternoon but it did not offer much consolation. “Not to have the chance to defend my title tomorrow is devastating.”

Krol steps up
When the champion crashes, there will always be a new champion. With Verbij out of contention, his good friend Thomas Krol (NED) might prosper in Heerenveen. The European 1500m champion started his tournament with a personal best of 34.90 seconds in the 500m and really hit out at his rivals in the 1000m.

“I’m super happy to skate a 500m under 35 seconds for the second time. The first time was in a training race so this time it’s really official. But my 1000m made me even more happy. That’s where I really make the difference, especially in my final lap. I was lucky with the final cross-over [to be able to draft behind] Joel Dufter (GER).”

In the 500m Krol came fourth behind Russian Viktor Mushtakov (34.69s), Dufter (34.79s) and compatriot Hein Otterspeer (34.85s), but after the 1000m he convincingly leads the standings with a 0.34-second margin over second-placed Otterspeer in Sunday’s 500m. Dufter is ranked third and has to make up 0.43 seconds to catch with Krol in the second 500m.

Staying low lifts Golikova to the top
Angelina Golikova started the Ladies’ tournament with a 500m win in 37.27s, ahead of Dutch prodigy Femke Kok and defending champion Vanessa Herzog (AUT). The Russian followed it up with a solid one minute,14.67 seconds for fourth place in the 1000m and found herself on top of the rankings after the first day. She explained how she had improved her 1000m, which has previously been her Achilles heel: “I feel very comfortable in the 500m and that left me time to think about improving in the 1000m. In the past I was always afraid for the second lap. I analyzed videos and I found that I was not able to stay low in the final part of the race, so now I keep telling myself to stay low towards the end and that helps.”

Leerdam second despite many errors
Jorien ter Mors (NED) won the 1000m in 1:14.10, just 0.05 seconds ahead of compatriot Jutta Leerdam, who is ranked second after day one, but was far from satisfied with her performance in both the 500m and the 1000m. “Everything I could do wrong, went wrong. That’s good, because I know I can go a second faster in the 1000m and I can also go faster in the 500m. The tournament is four distances and the damage is limited, so I can still end up on top.”

Femke Kok, who came third in the 1000m in 1:14.62, starts the final day in third place, 0.23s behind Golikova in Sunday’s 500m. The 20-year-old sprinter was happy to be in contention at her career-first European Sprint Championships: “My 500m was not very good. I just made too many small mistakes but I’m happy to be where I am. Tomorrow will be exciting. I think everything’s possible.”