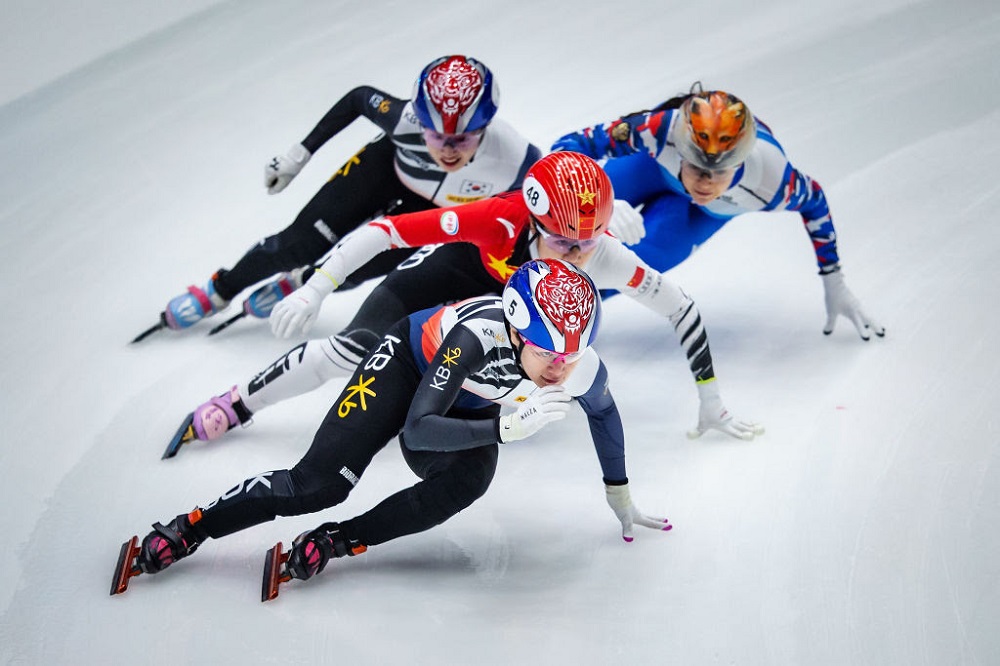 There was another trio of individual gold medals for the Rep. Koreans on the final day of competition at the ISU World Cup Short Track Speedskating in Dordrecht on Sunday.

While they repeated their previous day’s hat-trick, world 500m champion Lara van Ruijven (NED) won in her specialty and also grabbed gold with the Dutch team in the ladies’ relay to the delight of the home crowd. Only a photo finish prevented the Netherlands team repeating the success in the men’s event, where they were pipped on the line by Canada.

Park Ji Won (KOR) takes his second gold
Park Ji Won (KOR) was the only skater to take home two individual gold medals from Dordrecht as he won the men’s 1000m, following his victory in the 1500m on Saturday, to top the World Cup rankings in both distances.

“I am very happy to be able to get a gold medal so often,” said Park, who had also triumphed in the 1000m in Dresden and Nagoya.

“Going into a final, I never expect to just win every single time. I’m just trying to do my best. In each final, there are a lot of other very good skaters too. So you’re never sure of winning.”

The 23-year-old added: “I have been training hard since I was little and I still do that every day. I think it’s all falling into place right now. But I still want to be faster. I would like to improve my skills and tactics more and more.”

Park finished more than one-tenth of a second ahead of teammate Kim Dong Wook, while Canada’s Steven Dubois took the bronze medal.

Park’s next target is the World Championship in Seoul in March. “I am aiming for a place amongst the top five,” he said.

Kim Ji Yoo (KOR) upgrades to gold
After winning silver in the Ladies’ 1500m on Saturday, Rep. Korea’s Kim Ji Yoo upgraded to a gold medal in the 1000m on the final day of competition, ahead of runner-up Han Yu Tong (CHN) and Sofia Prosvirnova (RUS) in third place.

Suzanne Schulting (NED), who beat Kim in the 1500m to claim a first World Cup gold on home ice, missed Sunday’s 1000m decider after crashing in the semi-finals.

Schulting, the reigning European, World and Olympic champion in the 1000m, regrouped to win the B-final. “It was probably my first B-final since before the Olympic Games in 2018,” she said.

“That’s super frustrating, because I just wanted to be in the final.
“I could make a lot of fuss about it, but that doesn’t make it any better. I just messed up in the semi-final and missed the final because of that. This should be a lesson for me.”

Van Ruijven, the reigning 500m world champion, qualified for the final after four re-starts in her semi-final.

In the medal race, there were two more restarts, which tested her nerve even more. “That’s something that eats you,” said the 27-year-old. “It’s difficult, but I thought, ‘Everyone has this problem’. I tried not to think about it too much.”

Van Ruijven finished almost two-tenths of a second ahead of teammate Yara van Kerkhof after all the other skaters fell. Poland’s Kamila Stormowska picked herself up to collect the bronze.

“It was a complete chaos during the final, a lot happened with falls and things like that,” said Van Kerkhof. “But after all I’m super happy with this result. It’s great to get one-two and to celebrate together.”

For Desmet, who has trained in the Netherlands since 2018, it was his first World Cup medal of any colour. “It’s really cool to achieve this here,” said the 21-year-old.

“It [training in Netherlands] has helped me a lot to be able to compete with the best of the world. To show it off during a competition here is great.”

The Belgian skater heard the crowd getting behind him during the race, as the stadium announcer encouraged all the fans to support Desmet. “The atmosphere has been fantastic. It was really nice to get all the support. This result is a stepping stone towards more.”

Netherlands and Canada take relay golds
The final gold medals of the event went to Netherlands’ women and Canada’s men. Schulting and Van Ruijven added to their gold collection as their team defeated Canada and Rep. Korea in the Ladies’ 3000m Relay. The Dutch men missed out in a photo finish to Canada in the Men’s 5000m event, where China took the bronze.