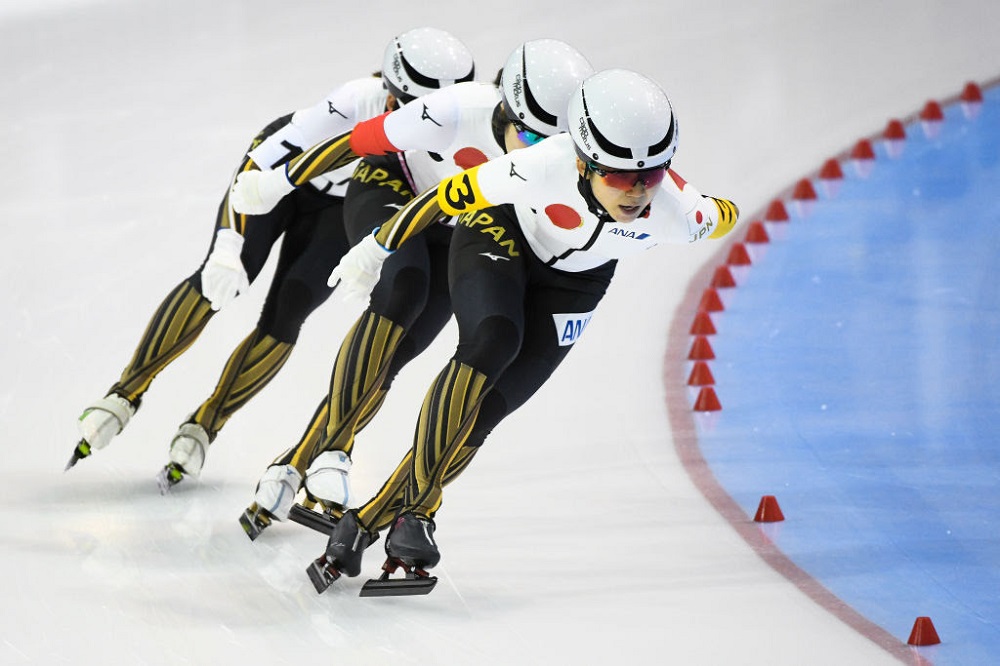 Graeme Fish (CAN) won the gruelling men's 10000m in an enthralling battle of attrition to kick-off a spectacular second day of competition at the World Single Distances Championships in Salt Lake City on Friday. In the men's 500m Pavel Kulizhnikov (RUS) overcame a dislocated shoulder to take gold in 33.72 seconds.

Nao Kodaira (JPN) won the 500m world title, but finished outside the world record she wanted to break, while Angelina Golikova missed out on the gold medal but secured the Russian record for at least another year. In the Ladies’ Team Pursuit, Japan (pictured) did skate a world record to retain their title.

Men’s 10000m: Fish finishes fastest to end Dutch dominance
The Men's 10000m is always one to reward stamina, and in Salt Lake City it turned out to be an all-or-nothing race.

For Kazakhstan’s Dmitry Morozov, Nicola Tumolero of Italy and Aleksandr Rumyantsev (RUS) it turned out be to nothing: the trio started fast but were simply not able to complete the 25 laps of the Utah Olympic Oval.

Patrick Beckert, on the other hand, managed to complete the race in a personal-best time of 12:47.93. The experienced German was on top of the rankings halfway through the competition, but had the agony of almost an hour’s wait to discover what his performance would be worth.

"I hoped [to be on the podium],” he said. “In Salt Lake City a lot can happen, especially in the 10000m, because of the altitude. A lot of people have difficulties with that.

"I skated a national record and a personal best. That was all I could do… and then just sit and wait."

In the first pair after the ice-cleaning break, Tumolero and Rumyantsev surprised the crowd when they both quit the race in total exhaustion.

Canada’s Graeme Fish brought the attention back to the ice when he started posting world-record threatening lap-times in the second pairing after the break.

"I wasn't really focused on skating a world record, I was just doing what I was doing the whole year," the 22-year-old said.

"After my starting time I knew that I was in the wheelhouse [for a world record] and I didn't know exactly how close I was. But once I started building the high 9s [29 second laps] my coach was saying ‘world record, world record’ and that was when I knew [I had to] keep doing what I did."

Keep doing it he did, posting a blistering 12:33.86 to lower the world’s-best mark set by his team-mate and mentor Ted-Jan Bloemen on the same ice in 2015.

Fish's race did not come as a total surprise - the Canadian youngster was the only one skater able to record a negative split when he took bronze in Thursday's 5000m.

With the benchmark set, Bloemen stepped up to face Patrick Roest (NED) in the final pairing.

Having won Thursday's 5000m gold, Bloemen was not able to match the younger man’s lap times, despite starting faster.

"I'm not going to be beaten just like that, I really wanted to win and get my world record back," Bloemen said.

The Olympic champion eventually finished in 12:45.01 to take silver, which he celebrated with a generous smile and a peck on the cheek for the delighted Fish. Beckert settled for the bronze.

"I'm so proud of my team-mate [Fish]," Bloemen said. "We train together, we work together and I really don't know if I would have managed to come back the way I did yesterday [5000m gold] and today with silver without the help of [Fish] and [fellow team-mate] Jordan Belchos.”

Fish's victory means that a Dutch skater has not been crowned world champion in
Men's 10000m for the first time in the 20 occasions that the World Single Distances Championship has been held. Jorrit Bergsma was the highest-ranked skater from the Netherlands, finishing fourth.

Men’s 500m: Kulizhnikov defies shoulder problem to take gold
Even a dislocated right shoulder could not stop Pavel Kulizhnikov (RUS) being in a league of his own in Friday's 500m.

"That's karma," said the Russian, who injured himself during Thursday’s Team Pursuit. "Yesterday the ice took me down, today it handed me the fastest time."

Kulizhnikov clocked 33.72 to defeat team-mate and reigning champion Ruslan Murashov, who became only the third skater ever to beak the 34-second barrier, stopping the clock at 33.99.

The speedy time came as no surprise to Murashov.

"That's not special,” he said. “I knew I was capable of doing that."

The other is Japan’s Tatsuya Shinhama, who has a personal best of 33.79 and grabbed bronze here in 34.03.

"It was quite difficult because of my injury," explained world-record holder Kulizhnikov, who had surgery on his right shoulder in the 2014-2015 season.

"After yesterday [when he crashed in the Team Sprint], I decided to start a bit more cautiously."

Kulizhnikov was happy to win by a 0.26 margin, but his rivals could have been closer had they been luckier in the draw.

The world-record holder started in the inner lane to finish in the outer lane, which is considered to be an advantage on fast-paced tracks because it can be difficult to hold the corner at 60 kilometers per hour.

"For me, it doesn't make much of a difference," Kulizhnikov said. "But Murashov and Shinhama both had the last inner corner and they would have been closer if it had been the other way around."

Shinhama agreed: "I do think that Kulizhnikov is faster than me, but if the draw had been the other way around the result could have been different too."


Ladies’ Team Pursuit: Japan back to their normal selves
Japan's Miho and Nana Takagi have dominated the Team Pursuit together with Ayano Sato over the past three years, but this season they have looked vulnerable after a series of line-up changes in the World Cup.

In Salt Lake City they were back to their normal selves. Sato linked up with the Takagi sisters and together they shaved 0.11 seconds off their own 2017 world record, clocking 2:50.76 to win gold ahead of the Netherlands and Canada.

"We are very happy,” smiled the team's anchor Miho Takagi. "Everyone has gotten better since the last World Cup in Nagano.

"[Ayano Sato] had a bad feeling at the World Cup in Poland [in November], but after that she trained more and now she's in very good condition."

Despite their good form, the world record did not come easy for the Japanese trio.

"The [rules for the] suits have changed. We have to wear more protection, so we can't move the way we used to do,” Miho Takagi said. “That makes it difficult.

The Dutch ladies (Antoinette de Jong, Melissa Wijfje and Ireen Wüst) were disappointed to collect a second successive world silver medal in the Team Pursuit, but they had an explanation.

"We never train together at high speeds," De Jong said. "We have to train more to get used to each other's strides. We are letting ourselves down [by not training enough together]."

Ladies’ 500m: Kodaira disappointed despite golden display
Despite clocking 36.69 to recapture the world title Austria’s Vanessa Herzog took from her last year in Inzell, Japan’s Nao Kodaira was not completely satisfied with her afternoon’s work.

Herzog skated after Kodaira set her time and finished in 36.83, which put her in fourth place.

"I thought it was a top time, but not impossible for me,” Golikova said. “I was nervous and very focused. I was so focused that I almost forgot to take my armband [which is mandatory to indicate the starting lane].”

Golikova grabbed the armband in the nick of time and managed to beat her compatriot by a 0.05 second margin, leaving her an agonising 0.04 short of winning the title.

At last week’s World Cup in Calgary Golikova had broken Fatkulina's Russian national record and she managed to shave a little more off that time.

"I was also very nervous because I skated versus Olga [Fatkulina] and she is the European champion,” Golikova said. “I wanted to fight with her to show that I can be a champion too.

"I'm very happy now. I don’t have the gold medal, but I have the record."

Fatkulina had to settle for bronze, despite skating a personal best of 36.83.