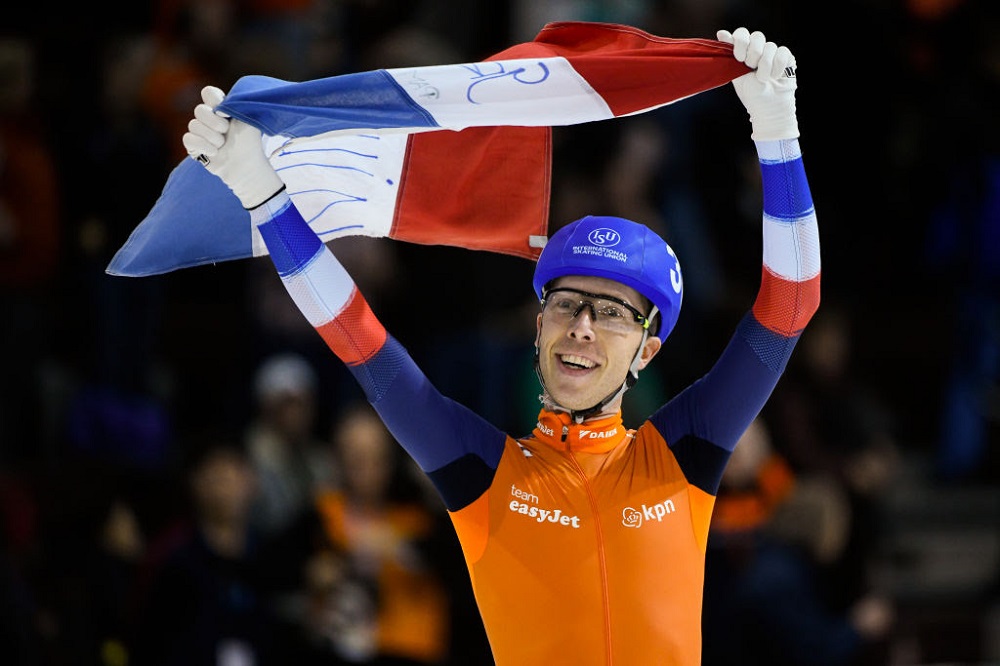 All was well that ended well for Kjeld Nuis (NED) on the final day of the ISU World Single Distances Speed Skating Championships in Salt Lake City. After losing his world record en route to coming second in the 1000m on Saturday, the Olympic champion edged out his team-mate Thomas Krol to take the 1500m on Sunday. Joey Mantia (USA) surprised himself with a big personal best and a bronze on home ice.

Another Dutch star, Jorrit Bergsma (pictured), made amends for a mediocre display in the 5000m and the 10000m by winning the Mass Start in style.

In the Ladies’ tournament Ireen Wüst kept her cool to win the Ladies’ 1500m. The 33-year-old Dutch superstar relied on her vast experience to seize her career fifth 1500m world title and her 20th world title in total, including Allround honors.

Men’s 1500m: Everything comes good for Nuis
Kjeld Nuis burst into tears after coming off the podium clutching the gold medal for his career second world title in the 1500m.

"It's been such a tough run-up [to this tournament]," the Dutch skater said.

The Olympic 1000m and 1500m champion missed his country’s world championships trials due to illness but was handed a wild card at the expense of Koen Verweij (NED), who subsequently went to court to fight the decision.

The decision was upheld, but Nuis was struggling to get back in shape after his illness.

"I missed the two most beautiful tournaments in Thialf [venue for the Dutch national championships and the European Championships in Heerenveen, Netherlands],” he said.

"Then I was beaten by half-a-second last week [by Pavel Kulizhnikov (RUS) in the Calgary World Cup 1000m] and yesterday even by more than a second. It was quite hard to keep confidence."

The 1.04 second difference between Kulizhnikov and Nuis in Saturday’s long sprint was the biggest gap between the winner and runner-up in the history of the 1000m at the worlds, but Kulizhnikov did not skate in the 1500m.

Nuis stopped the clock at 1:41.66 to beat his team-mate and the defending champion Thomas Krol by a 0.07 margin and recover the title he had won in 2017.

"The past two months my life as a top athlete has not been fun at all, so when I crossed that line and saw that number 1 on the scoreboard, I was stoked,” Nuis said.

"I'm so proud of myself and of everyone in the team who have always kept faith in me."

Krol, who lost bronze due to a disqualification in the 1000m on Saturday, was disappointed to lose his 1500m title.

"It's second best, due to my own mistakes,” he said. “I'm better at low-altitude tracks, the high-speed corners just did not work for me this year.

"I've been the best 1500m skater so far this year, so it's ‘mission: not accomplished’ and that's very disappointing."

To the delight of the home crowd at the Utah Olympic Oval, Joey Mantia (USA) finished third in 1:42.16, shaving off 0.29 seconds from his personal best.

“I'm ecstatic about the PB,” Mantia said. “I haven’t PBd in this race for four or five years now, so I started to think that I'm so old that I can't time trial any more."

Men’s Mass Start: Bergsma makes amends
It is fair to say that up until Sunday afternoon Jorrit Bergsma (NED) had not really been enjoying his time at the 2020 World Single Distances Championships.

The 34-year-old lost his world title in the 10000m to Graeme Fish (CAN) on Friday, to follow a disappointing eighth place in the 5000m on Thursday.

But the Dutchman made amends with an impressive display in the mass start.

"It worked out perfectly," Bergsma explained. "Arjan [team mate Arjan Stroetinga] was in the back together with big men like Joey Mantia and Bart Swings (BEL).

"That breakaway went and I knew I had to react. It took me a while but I caught up with four laps to go. That gave me time to catch some breath and go for it."

Bergsma finished it off heading into the final lap in front and did not give way. Canadian pair Jordan Belchos and Gélinas-Beaulieu finished second and third respectively.

The Men’s Mass Start brought the championships to a close, with Netherlands heading the medal table with four golds, followed by Canada and Russia on two each.

Ladies’ 1500m: Experience key to fifth title for Wüst
After her superior display in last weekend’s 1500m World Cup race at the Calgary Olympic Oval, Miho Takagi (JPN) was the outright favorite to win a career-first title at the World Single Distances Championships.

The Japanese ace struggled to find her stride in Salt Lake City, however, and with 1:51.58 she came almost two seconds short of the world record she set on the same ice last year. Takagi ended up in fourth place.

"Mentally, I was not so strong today," she said. "It was difficult to concentrate and focus, there was too much distraction."

Nobody knows how to handle the pressure of a big championships race better than Ireen Wüst.

The defending champion had set her sights on breaking the world record in Salt Lake City. She finished a little more than a second outside Takagi's leading mark of 1:49.83, but 1:50.92 was good enough to retain her title.

"I was very good today and I did what I had to do," Wüst said.

Last week in Calgary Wüst finished 1.65 seconds behind the impressive Takagi, but the Dutch skater kept her faith.

"I felt that I was improving this week,” she said. “The pressure and the confidence grew day-by-day and that's how I like it.”

"It's such an incredible effort to pull it off again,” he said. “She knows exactly what to do to prepare best for a race like this. As a coach I sometimes wonder whether I shouldn't do more, but sometimes you try to do too much. On race day, Ireen does it all by herself."

Lalenkova gave birth to a son, Nikita, after the Sochi 2014 Olympic Games before deciding on a return to the ice.

"This proves it was the right decision," said the Russian, who also won a Team Pursuit bronze medal at last year's world championships.

"That was actually more emotional because it was the first ever medal I won but an individual medal is more important to me."

Ladies’ Mass Start: Blondin emerges from the chaos to take top prize
Race strategy played a big part in the the Ladies' Mass Start. After a few initial attempts to break away by Germany’s Michelle Uhrig and Polish pair Karolina Bosiek and Karolina Gasecka the bunch stayed together at relatively slow pace until the final two laps.

After the dust had settled, Blondin came around the final corner in front and fought hard to keep Kim and Schouten at bay.

"Honestly it's a little bit of a blur," Blondin said after the chaotic final lap.

"I positioned myself in the right place, fought my way to the front and held it."

The Canadian’s gold medal made amends for a frustrating time in three previous individual starts at the 2020 Salt Lake City worlds.

"It's been a strange week. Physically I'm there, but mentally it's been difficult."

Schouten was disappointed after finishing third.

"I came here to win,” she said. “I know that I'm the fastest in the field and that's what I wanted to show.

"Because the race had been slow I wanted to start my jump at 500m from the line, but then Blondin swerved outside and I was held back a bit.

"In that final lap I was pushed and pulled all over the place. It's not Blondin, but many others. One of the Japanese ladies' [Sato] got disqualified, but that doesn't help me a bit.

"On the one hand I shouldn't complain because it comes with the sport, but on the other I think it's too much pushing and pulling."

With Blondin's second world title, she equaled Schouten's total since the event was added to the worlds in 2015. Kim Bo-Reum, who took silver this time around, won the 2017 edition.

Netherlands Ladies finished with three gold medals from the championships, ahead of Russia on two. Canada, Czech Republic and Russia took one each.