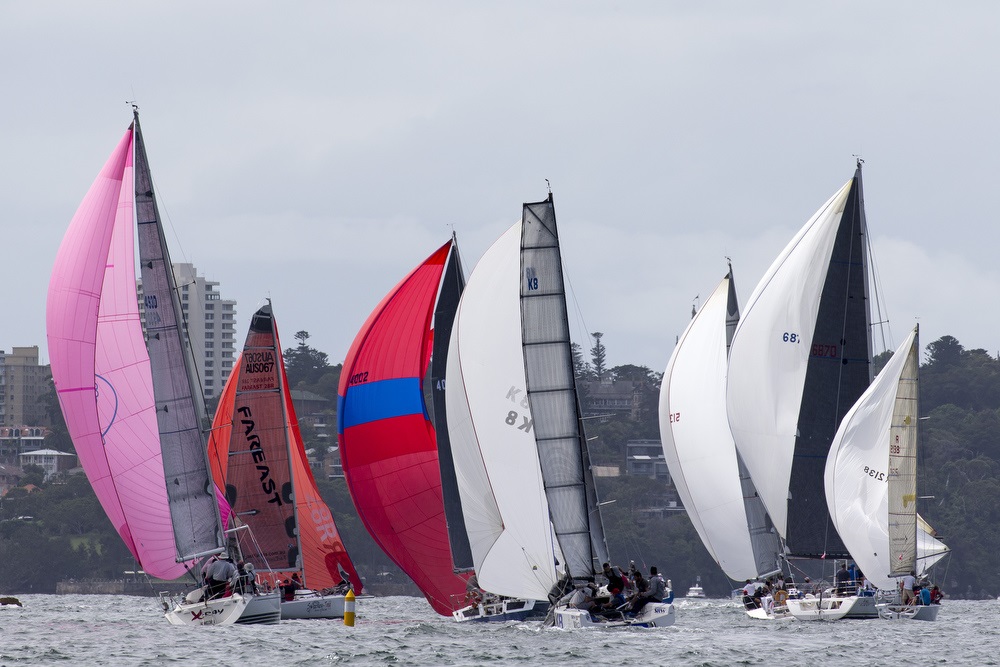 Results are final and prize winners primed for Monday night’s trophy presentation at MHYC where all placegetters must be present, or their winnings default to the next in line. Results for all divisions available here.

All courses (other than offshore) were commentated live on Sunday via the event Facebook page.

Geoff and Pip Lavis’ Inglis/Dovell 50 UBS Wild Thing (Cruising Yacht Club of Australia) took it to the rest of division 1, completing four Sydney Harbour courses over the weekend of March 7-8 to edge out Jiang Lin’s Balmain Sailing Club based X43 Min River by a single point.

Parrott said of his win: “We were previously sailing in the X Yacht division but this time we decided to enter PHS division 2 because the speed of the other boats is similar to ours. Conditions-wise we enjoyed Saturday; Sunday was very challenging very unstable and very difficult for all boats. I think the tacticians had a very tough day.”

The Interclub Teams Event for Performance Spinnaker divisions went to the host, MHYC, on 122 points followed by the Royal Prince Alfred Yacht Club (RPAYC) on 137 points and the CYCA third on 145 points.

Mitchell Miller’s Adams 10 Rock Solid moved past Powderhulk on points thanks to a bullet in the deciding race. “We knew it all rested on the final race, then we had an OCS when Powderhulk pushed us over! We watched them sail into the distance thinking ‘that’s it’. There was no point following so we went the opposite way, in one-design, tactically it’s the only way to get ahead, and it paid,” Miller said. Rock Solid has been a divisional winner at Sydney Harbour Regatta six or seven times prior.

Cox, who recently turned 75, has new vigour in his step following a heart operation, this afternoon announcing: “I’m a new man!”. His long-time campaign with Nine Dragons has yielded plenty of Sydney Harbour Regatta victories, and this year his crew put together an impressive scoresheet of five wins from six starts.

“On the first day with disturbed seas and good wind we were strong and that led us to three bullets in a row,” the skipper regaled. “We were surprisingly close to the TPs at the top mark, and Primitive Cool. Credit to Bushranger and Soozl who were hanging on to us this weekend. We encouraged these two RPAYC boats to come down for the weekend after we went to their Pittwater Regatta last month, where Bushranger beat us.”


Final word from the PRO

Sunday March 8 was a much better day, according to the Principal Race Officer Denis Thompson. “While the wind was shifty to start off, the race committee were proactive with changing and shortening courses to suit. It was a smoother day racing-wise with cloud cover that pulled the breeze around, down to five knots then around to the south-east and up to 12-14 knots for the final race of the day. It was good racing.”