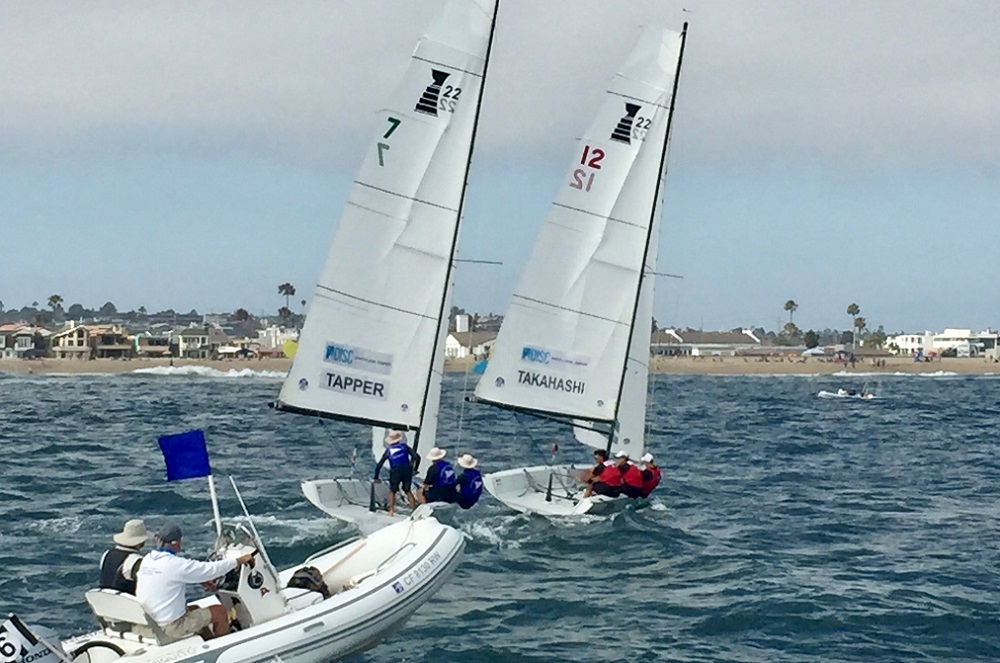 If you like upsets, lead changes and a last-minute surprise at the start-finish line which had a major
impact on the standings, you would have loved the first day of Balboa Yacht Club’s 53 rd Governor’s Cup International Youth Match Racing Championship.

Finn Tapper (AUS) along with pre-regatta favorite and two time “GovCup” runner-up Leonard “Leo” Takahashi (NZL) lead after seven of the total of 22 races in the “double round robin” scheduled today
(Tuesday) through Friday where every team sails against every other team twice. Both Tapper and Takahashi have 5 wins and 2 losses.

At Monday evening’s Welcome Dinner and “Meet the Teams,” seasoned observers predicted that this would be one of the most evenly matched group of skippers ever in the event’s 53 year history. So far the standings reflect that with five more skippers tied just below Tapper and Takahashi with 4-3 records, just one win behind the leaders. They include two skippers from the Royal New Zealand Yacht Squadron — in addition to Takahashi — Jordan Stevenson, and Nick Egnot-Johnson. They are joined by Frank Dair and Jack Parkin of the United States. Dair actually has been living in New Zealand and is also a product of that club’s world-class youth programs.

The fifth of this group is GovCup veteran Matt Whitfield (GBR), who looked certain to join Takahashi and Tapper at the top of the leaderboard with a 5-2 record until the finish of his last match. It coincided with the start of the crucial clash between the leaders.

Whitfield misjudged his finish and, going downwind on port tack while well ahead of his opponent, fouled Tapper as the latter started. That not only caused Tapper to lose his start against Takahashi, but also resulted in Whitfield incurring a penalty and losing a race he had well in hand. Post-race the umpires deducted a point from Whitfield’s overall score for damage incurred in the collision with Tapper, lowering his score to 3-4.

Two matches earlier, Tapper was undefeated but his fellow Australian Clare Costanzo and her all female crew gave him more than he could handle – defeating him relatively easily. Other sailors went on winning streaks but then, while expecting to continue their success, would lose to a team with a lesser record.

Cameron Feves (USA) won the right to compete by winning the U.S. Youth Match Racing Championship for the Rose Cup in June, but only had two victories on the day – but one of them was against another pre-regatta favorite, New Zealand’s Egnot-Johnson.

With 15 races remaining in the rounds robin before the four top skippers advance to semi-finals on Friday, at least ten of the twelve competitors are in contention only one win behind the 4-3 group. In
addition to Costanzo, local favorite David Wood of host Balboa Yacht Club and Denmark’s Jesper Borch have 3-4 records.

With 6-12 knot winds expected to continue off Newport Beach on Wednesday, event leaders look forward to tomorrow’s racing with the first attention signal expected at 1130 PDT off the Balboa Pier.

The Governor’s Cup is presented by DISC Spine and Sports Center led by Dr. Rob Bray, with principal sponsors the Croul Family and Terry Causey for The Call of the Sea Foundation.