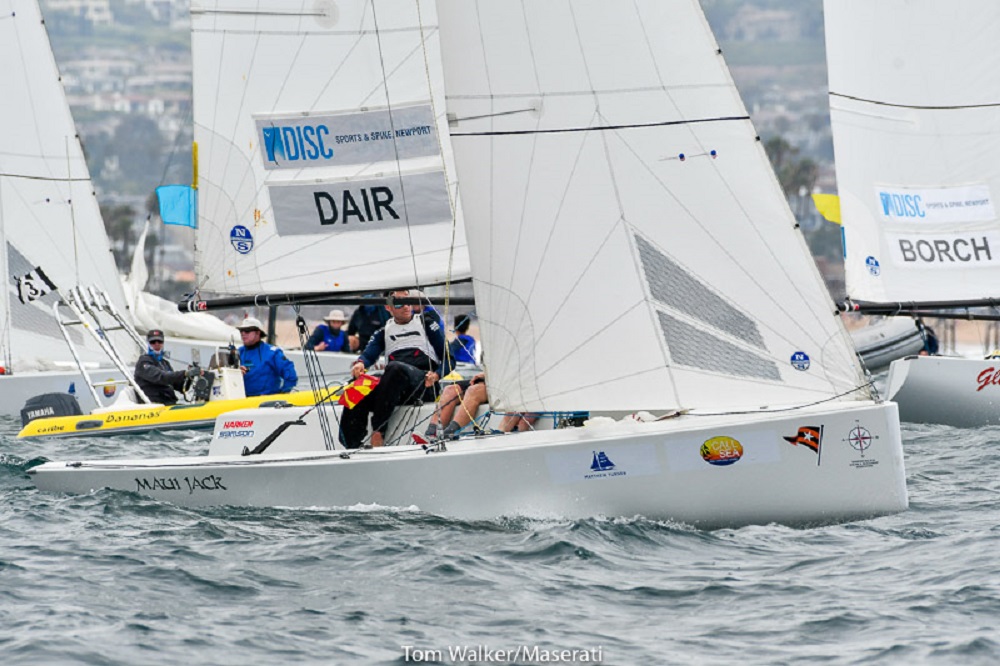 With nine races togo in the second “round-robin” stage of Balboa Yacht Club’s 53 rd Annual Governor’s Cup International Youth Match Racing Championship presented by DISC Sports and Spine Center, at the end of day two there was little more clarity about who will be in the semi-finals than after Tuesday’s first day of racing. While Leonard Takahashi (NZL, Royal New Zealand Yacht Squadron), the two-time ”GovCup” runner-up, is now alone on the top of the leaderboard with ten wins, Frank Dair (USA, California Yacht Club) is only one point back on nine wins, and four skippers have eight points and are essentially tied for third, with four semi-final spots ultimately on the line come Friday.

“We had a good day, but are still trying to minimize mistakes and get back to our old form,” Dair said after his strong showing today. “Both my crew are doing a good job, and we look forward to some more great racing tomorrow. You can’t slack off in any race because the field here is so good that any of the teams can capitalize on a mistake and take a race off you.”

Former GovCup runner up and World Match Race Tour star Chris Steele (NZL) was watching from the water and said, “I’m proud of the Squadron boys.” He added that the second day of most match racing
series is “moving day,” meaning that the top of the fleet and the likely semi-finalists generally start to become apparent. However, today, given the close scores among at least six of the top teams, “the moving vans aren’t quite here yet.”
Most of today’s matches were close and tightly contested as the current standings. The featured match in the last race of the first round-robin was between pre-regatta favorites Takahashi and Egnot-Johnson, with the latter leading for three of the legs, but being passed by Takahashi on the fourth and final downwind leg to preserve his overall lead.

At the end of the first round-robin, the two matches that had been postponed were made up before the start of the second round-robin started later this afternoon, and the result of one of them in particular is likely to affect the identity of the semi-finalists come Friday. At the time, Tapper had seven wins, one behind Takahashi, but a win in this “makeup” race against Egnot-Johnson would return him to the co-leader position. But, it was not to be as “Nick EJ” had a slim lead at the start and was able to maintain the lead through the race, gybing to cross the finish line at the slightly favored committee boat end – winning by only six feet.

With those races completed, the first matches of the second round- robin began with an almost immediate upset as Matt Whitfield (GBR, Penarth YC, Wales) won his start against Tapper, extended on both upwind legs, held off Tapper downwind, and ended up with a fairly easy victory putting Whitfield back in the hunt for a semi-final slot. Whitfield undoubtedly regrets two collisions yesterday, which caused both a last second loss and a deduction of 1.5 points from his score for damage, which could have been avoided. That dropped him from the co-lead after day one to 10 th place—more indication of the tight competition.

Day two ended with Clare Costanzo (AUS, Royal Prince Alfred YC) still within striking distance of the semi-finals if they have big days tomorrow and Friday.

Conditions were again near perfect with 10-14 knot breeze off Newport Beach, with unusually large (for Newport Beach) chop. This put a premium on boat speed. The more experienced teams took advantage of that, which is crucial in this most evenly matched group of GovCup teams in recent memory.

At least six races are planned on day three, Thursday, July 18. The second round-robin will be completed on Friday, and the top four boats will start the semi-final races. Those not qualifying for the semis will continue to race to secure their final placing with the 5 th place boat sailing the 6 th , the 7 th versus the 8 th , etc. The winners of the semi-finals, first to win three-race pairings, will sail for the Governor’s Cup on Saturday, and the losers will sail in the petit finals for third place.