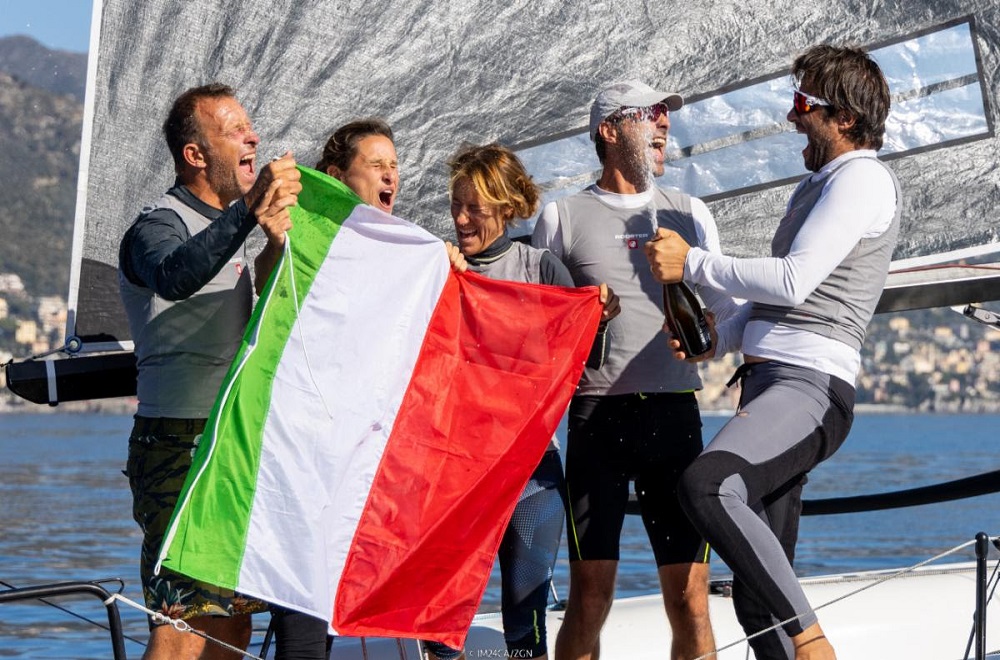 After a week of favourable weather conditions, that allowed to held nine highly competitive races, Genoa greeted the 2022 Melges 24 European Championship with a day of no wind. The no race day, matured after a couple of hours of vain waiting on the eastern racecourse, has crystallized the provisional rankings, crowning Strambapapà (ITA) of Michele Paoletti and Mataran 24 (CRO) of Ante Botica as new continental champions of this competitive one-design class. Apart the winners, it’s important to underline that nine different teams were the winners of the nine races of the event.

If for Strambapapà (ITA) it was to win the the overall victory, amply deserved by the Paoletti team who just yesterday had missed the opportunity to close the championship with a race to spare due to a gennaker failure, then for the Croatians on Ante Botica’s Mataran 24 (CRO), sailing their first season on Melges 24 boat, it was the victory in the Corinthian division and coincided with an excellent second place overall.

Completing the overall podium of the Melges 24 European Championship was Melgina (ITA) by Paolo Brescia, able to confirm himself also again as the winner of the Melges 24 European Sailing Series 2022 - an international circuit consisting of six events with a total of forty-nine single races - of which the event organized by the Yacht Club Italiano was considered as a final stage. The Brescia team, flying proudly the flad of Yacht Club Italiano, was followed by the Hungarians of Chinook, led by Akos Csolto, and Michael Tarabochia's White Room (GER). Chinook and White Room were also dominating the Corinthian division, where the podium was completed by Sergio Caramel's Arkanoé by Montura (ITA).
Ranking results of the Melges 24 European Sailing Series 2022

Returning to the Melges 24 European Championship rankings, it should be emphasized that to complete the Top Five were the outgoing champions on Altea (ITA) led by Andrea Racchelli, that finished nine points behind Melgina, and the Croatians of Universitas Nova (CRO) with Ivan Kljakovic Gaspic at the helm.

Onboard Universitas Nova was sailing also the youngest sailor of the event - Ivan's daughter Mia Kljakovic Gaspic, only 11 years old. The youngest boy of the event comes also from Croatia - 14 years old Noa Sangulin sailing with his father Luka Sangulin on Panjic.

To find the second positioned team in the Corinthian division of the European Championship is necessary to scroll the ranking to the ninth place, occupied by Taki 4 (ITA) by Marco Zammarchi and steered by Niccolo Bertola, while the third is ranked further back, in twelfth place, and corresponds to the name of AleAli Eurocart (ITA) by Barbara Bomben.

To close the European Championship, the last event of the Melges 24 2022 season, was the award ceremony, which was attended by the Mayor of Genoa Marco Bucci, the Councilor for Sport of the Liguria Region Simona Ferro, the Vice President Matteo Berlingier and several members of the board of the Yacht Club Italiano along with the International Melges 24 Class Association and the Italian Melges 24 Class., and most of the competitors of the event. Piero Andolina, the Vice President Europe of the International Melges 24 Class was thanking for the great organization and wonderful hospitality Yacht Club Italiano with all its staff, and also the great number of volunteers, the Race Committee, Measurers' team, International Jury as well the staff of the International Class Association and Italian class.