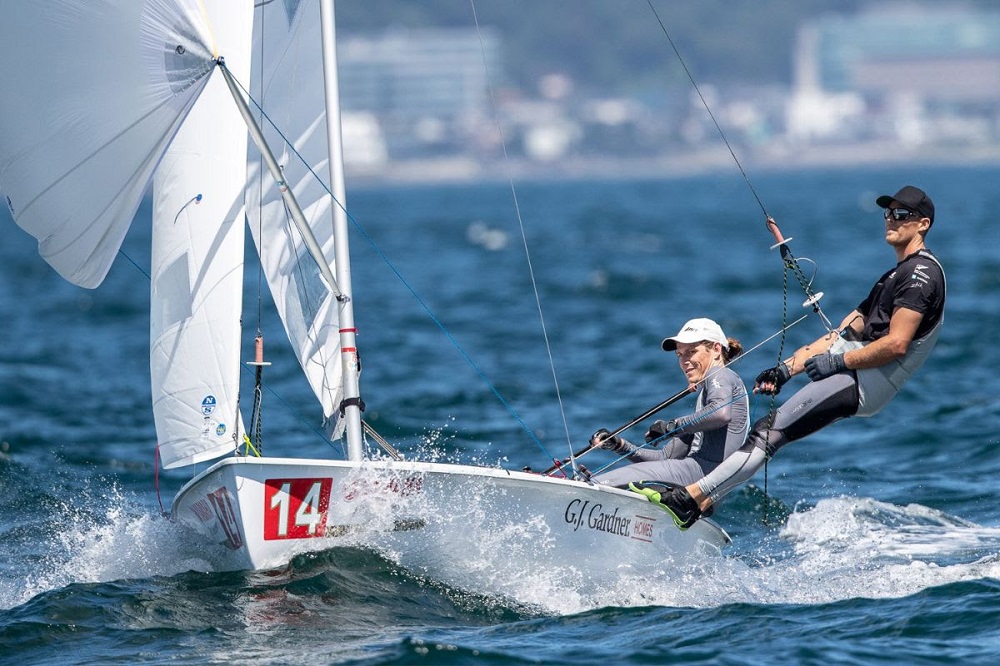 Snow-Hanson and Willcox in contention

Paul Snow-Hansen and Dan Willcox rocketed up the leaderboard at the 470 world championships in Japan today to leave themselves in a strong position heading into the first day of gold fleet racing.

The pair banked two seconds and a 10th in today's three races to leave them in sixth overall, seven points behind Spain's Jordi Xammar and Nicolas Rodriguez. They revelled in the classic sea breeze conditions - 10-13 knots with nice waves - and actually took the regatta lead going into the day's final race.

The leaderboard was always going to radically shake up once the drop for their worst result came into play and it benefitted Snow-Hansen and Willcox immensely as they were able to discard the 24th they recorded in their opening race.

It means they have little margin for error, however, and can't afford another big score in the remaining six races. They've found over the first couple of days there are few passing lanes in a consistent sea breeze at the Olympic venue in Enoshima, which is forecast again tomorrow.

A number of the main contenders have relatively clean score cards, not least of all Xammar and Rodriguez who recorded a perfect three wins from three today and multiple world champions Mathew Belcher and Will Ryan of Australia who have five scores inside the top four from qualifying.

Snow-Hansen and Willcox have achieved some top results in 2019 and will also approach tomorrow full of confidence.

"The conditions out there were awesome today, really fun," Snow-Hansen said. "We had some really good starts which set up our races but I also think we were going pretty quick and we made some pretty smart decisions around the race track. Surfing the different waves was really fun and we made a few gains downwind at times.

"The starts are always a focus for us and it will be harder now we have the best half of the fleet on the line. Hopefully we get some breeze like today, because today was spectacular."

It also agreed with Susannah Pyatt and Brianna Reynolds-Smith, who had a much better second day in the women's 470. The pair were 32nd, 19th and 11th in their three races today to leave them in 29th overall in the 39-boat fleet, which is small enough to remain as one fleet for the remainder of the regatta.

Results and standings after day 3 of the 470 world championships in Enoshima, Japan, today: