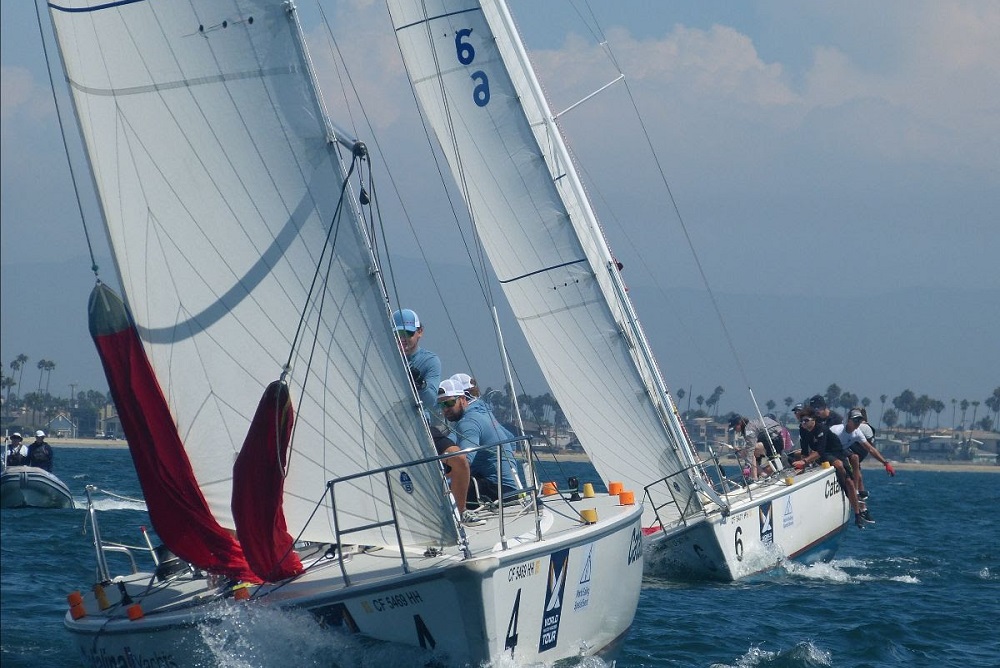 The reigning US Youth Match Racing Champion – just 19-years-old – Petersen topped the leaderboard, defeating each of his adversaries in the formidable fleet, with the exception of his rival and friend David Wood (USA), finishing 6:1; Wood finished 5:2.
This morning, Ficker Cup Chair Lisa Meier welcomed the eight teams from the US and abroad to the event which had been canceled once, and postponed ‘til September, due to the pandemic.

“Interest in the Ficker Cup exploded the moment the dates were released,” Meier announced. “We had dozens of inquiries from all over the world: people were so excited to get back on the race course, and eager for an invitation.”

The Ficker Cup is a Grade Two event and part of the World Match Racing Tour: a prominent regatta in its own right. The points skippers earn, and their subsequent rankings are the rungs on the ladder that lead them to bigger and better events and continue their ascent in the world of match racing.
As a bonus, the Ficker Cup serves as a qualifier for the Congressional Cup, with the top three finishers advancing to that event Sept. 14 to 19.

“The level of competition here is so high: the stakes are high!” Meier continued and pointing out the skippers have pulled together some lofty teams. Emil Kjaer (DEN) has Congressional Cup veteran Joachim Aschenbrenner onboard; the world’s number four-ranked match racing skipper Maxime Mesnil, is sailing with Pauline Courtois (FRA); and David Hood (USA) has crew from the ranks of four-time Congressional Cup champion Taylor Canfield.

“Even though this is a Grade Two event, they’re racing it like it’s a Grade One,” Meier exclaimed, “It’s exhilarating!”

Before releasing the eager sailors to the race course, Meier introduced Deon Macdonald, daughter of the late Bill Ficker.

The Ficker Cup was established in 1980 to recognize Bill Ficker – a distinguished lifelong sailor and competitor. Prior to that time, US clubs would run sail-offs and send their best skippers to compete in Congressional Cup. That process was formalized with the creation of the Ficker Cup two decades ago. Before his passing in 2017, Ficker was a frequent visitor to the regatta and presented his namesake trophy to the winners.

Macdonald said, “Our family appreciates that Long Beach Yacht Club was flexible and persevered in getting the Ficker Cup to the start line this year. My Dad would be thrilled to see this.”

Conditions were spectacular for the first of three days of racing, with sunshine and steady breezes. A rare thunderstorm lit up the sky last night – and throughout the day, towering cumulonimbus clouds told of steamy temperatures inland, which fueled the cool westerly.

The early tentativeness of the racers gave way to confidence and ferocity as the day went on. By Match Four, the box was penalty alley, with flags flying as the sailors became more savvy racing the Catalina 37s – a custom one-design keelboat specially manufactured for the Congressional Cup – and began feeling their oats.

Petersen had been scrapping all summer long with Kjaer and Wood – who, along with Peter Holz (USA), were tied for second at the end of the day. In June Petersen won the US Youth Match Racing Championship for the Rose Cup and followed up with a victory in the Governor’s Cup in July – where he edged out Kjaer in the finals. But it was Wood who triumphed in the International Youth Match Racing World Championship in mid-August, with Petersen in second, and Kjaer in fourth.

“We’ve had a fortunate opportunity to race each other a lot since June,” Petersen said. “It’s a lot of fun, developing those relationship; there’s some playful banter and a little bit of trash talk during the race, but it’s all in the name of fun.”

“Plus you start to learn their tendencies, and we make that a big part of our sailing plan: to learn other people’s habits and see where we can expose that. We’ve been sailing against Emil (Kjaer) and David (Wood) a long time, so we’ve got a few things in our playbook we know that they like to do and we’ve developed counter-plays, and use that against them and catch them off guard: it’s really to our advantage.”

“But the same thing goes both ways!” he noted. “I’m sure they’re doing the same thing with us … and then we have this whole other field of amazing competitors we deal with too.”

“At the end of the day, it really doesn’t matter who’s on the other side of the starting line,” Petersen stated. “We’re just out there trying to beat them. We’ve still got to go out there and do our work and sail our race.”

On the flip side was Pauline Courtois’s team from Le Havre, France – who finished 1:6 at the end of a challenging day: something she had fully anticipated. The three-time Women’s Match Racing French National Champion said “We are very happy to be here. It’s a prestigious event and really good regatta, but a very different boat than what we sail in France and in the women’s events. It’s bigger and heavier so I think difficult.” Undaunted, she added, “But that’s a good way to improve our sailing, and to progress. So we’re very happy and excited to compete and will try to do our best.”

Racing continues Saturday and Sunday Sept 11 and 12 at the Congressional Cup stadium, a designated race course adjacent the Belmont Veterans Memorial Pier. Spectators are invited to watch the action, for free, beginning at 11:30AM daily.

Conditions are expected to continue to be breezy and hot, hot, hot as the weather and action heat up, in the final battle for Ficker Cup.