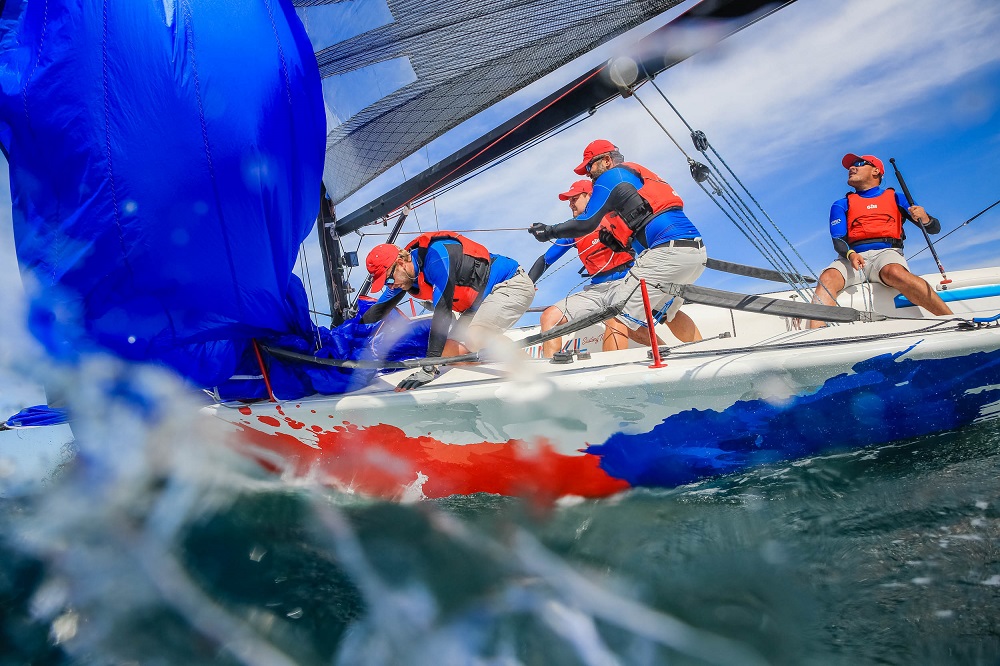 Patience is the Ket on Day 2

The second day of racing at the Festival of Sails kicked off with the Middle Distance Race getting underway in a light and fickle northerly wind. Five fleets took off across two different start lines to make their way out of Corio Bay.

The sailors had their work cut out for them with continuous tacking required as the yachts navigated the sand banks of the narrow channel. There were some tight battles in the light wind with a handful of boats pushing a little too hard into the shallow water in an attempt to minimise maneuvers.

The wind slowly shifted to the south-east and an increase in wind pressure made the day a little more pleasant for the sailors to make their way around the racecourse. After a long day and a lot of patience the course was shortened and the yachts cruised back to Royal Geelong Yacht Club in a building breeze.

One classic boat joining the Festival of Sails this week is the 12-metre class boat ‘Kookaburra’. ‘Kookaburra’ was the first of three ‘Kookaburras’ built by Iain Murray for the 1987 America's Cup held in Fremantle. One of the custodian owners Michael Smith explained, “This Kookaburra was a trial horse for the 1987 America’s Cup, the yacht never raced in the defender series but was there for the team all the way through.”

Smith continued, “Part of the deal was Iain Murray was able to keep the boats after the regatta and I saw him sailing it on Sydney Harbour and asked if he wanted to sell one and he did. We sailed it back to Melbourne in 1995 and she’s been sailing on the waters of Port Phillip since.”

“This is our 20th Festival of Sails and it’s always amazing to arrive in Geelong and see all the activity and to hear all the fantastic music on shore. We love this whole scene and it’s a really important part of our year.”

The Double-Hander event has joined the Festival of Sails for 2022 and the Victorian State Championships is being hosted as part of this week’s racing. Dan Morrow and Matt Draper aboard their 11 Metre One Design yacht ‘Affirmative Action’ are leading the charge representing the Royal Yacht Club of Victoria.

This year’s Festival of Sails is also host to the Melges 24 Class Australian Championships. The Race Committee tested the sailor’s patience by holding the Melges 24 and Guyon Wilson Class ashore for the majority of the morning due to lack of wind.

The racing was worth the wait with competitors treated to the best wind of the day as a 12 to 15 knot sea breeze pushed in during the afternoon. Kevin Nixon and his team aboard Accru are commanding the fleet after two days of racing, winning four out of the five races. There is still plenty to play for in the Championship with another five races scheduled over the next two days.

The festival continues tomorrow on Corio bay with a variety of bay racing and twilight racing on the schedule across the 11 divisions.