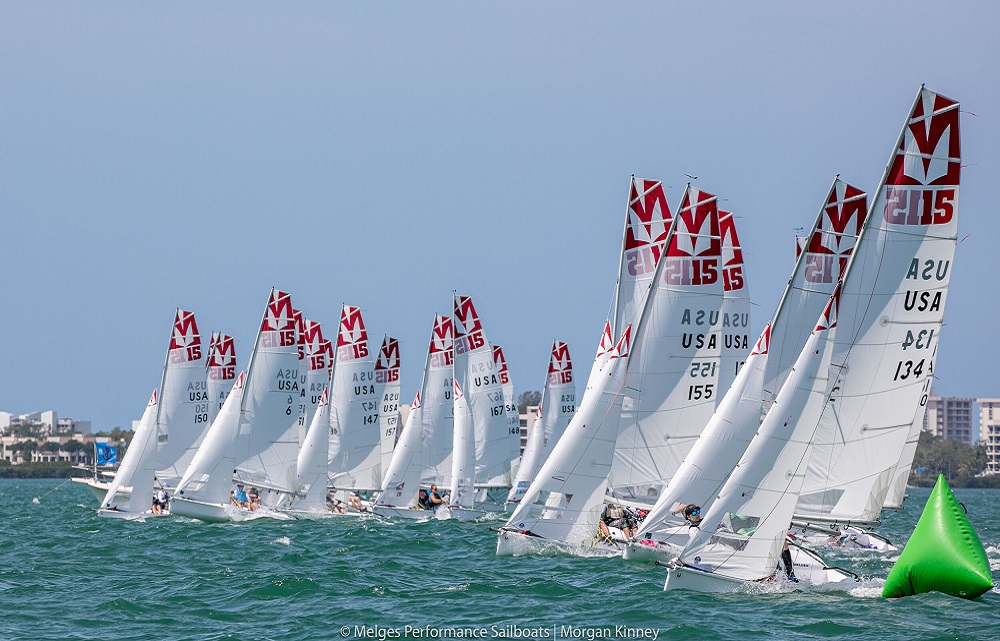 The Melges 15s have concluded the inaugural 2021 Winter Series in Sarasota, FL. On Sunday, March 28, the new one-design class announced the first Midwinter Champions Dwight Greenhouse and crew, Max Lopez. Emily Haig and crew, John Haig, were crowned the overall 2021 Winter Series Champion after their performance at all three events.

After three days of racing on the Sarasota Bay, the 30-boat fleet was treated to 20-25 knots of southeasterly winds on Sunday.

Race One started in a manageable 12-15 knots, and quickly increased for the second downwind. Finn Burdick, Craig Laing, and Dwight Greenhouse were tangled at the top mark and for the first downwind. Young Burdick was able to slide past the teams for a first-place finish. “It can get pretty intense when it’s windy like today. You have to make sure you’re hiking out, staying in clear air when you’re around those tough teams,” said Burdick. “Once you get the boat going, you can just let it rip around the top mark.”

The breeze picked up with gusts to 25 adding a significant chop to the turquoise water for the final race of the series. The right side of the course paid off in dividends as George Sipel moved up into the mix with the leaderboard. It wasn’t until the second downwind, that Sipel and crew, Mike Stark, kicked things into high gear to fly across the finish line ahead of Burdick and Craig Laing.

For Greenhouse, Sunday’s racing was about not losing and keeping the boat upright in the big air. “You think you’re going so fast that you’ve got to be mowing people down,” said Greenhouse. “But you look around and everyone is going just as fast; you see their bows out of the water skiing downhill. It’s incredible.”

Haig was racing with her father, John, for the entirety of the Winter Series. “Love the weather here. The wind has been really consistent at all the events,” she said. “More so, the people in this fleet have been really great to meet and hang out with.”

For series newcomer, Bob Mosby, the Midwinters was just the start of the fun he has planned for his Melges 15. “I’ve been looking forward to this event from the minute I bought the boat in July,” said Mosby. “I love the boat and the people I’ve met over these past few months. There’s a fleet growing in Columbia, SC, and more growth throughout the southeast. My wife and I have a great boat to sail, and I can’t wait to take advantage of it.”