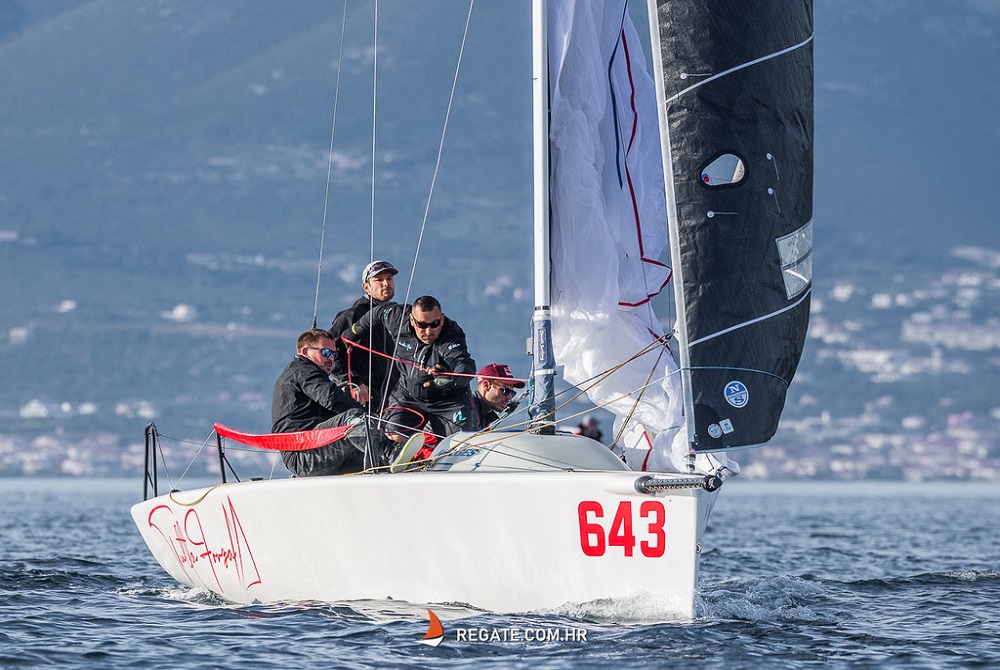 Laura Grondin, IM24CA Chair was excited to see the new Croatian Melges 24 class host their first national championship! “We welcome all of these sailors to our family and congratulate all who made the effort to be on the line for this inaugural event. Congratulations as well to those who made the podium!”

Background and preview
The bloom of the Melges 24 class in Croatia is one of the most beautiful stories in Croatian sailing. Namely, the best Croatian sailors have always sought a way to compete equally with each other, but in the past thirty years in Croatia, a one design class has never been successfully formed that would make it possible. Situation started to change one year ago, when with the initiative of Filip Juriši? from JK Mornar, several Croatian top sailors decided to buy the worldwide very popular one design Melges 24 sailboats. By the end of 2020 the Croatian Melges 24 fleet counted seven boats, but the fleet started to develop very quickly and many of the prominent sailors, from Dubrovnik to Istria, decided to get these fast performance boats, so the Croatian fleet is counting fifteen boats today, with a tendency of further growth.

Filip Juriši?, the President of the Croatian Melges 24 Class Association said it all started after the Covid-19 lockdown in 2020. "I saw in my club not well covered boat and what a surprise when I discovered it was a Melges 24 hull #166. I found out it was a boat, which belonged to Danish sailor Peter Sorensen, who brought the boat for holiday sailing to Croatia, but hadn't put it into waters for a couple of years. I contacted him and asked if we can do something with the boat since it's been my dream to have such performance boat to sail with friends. Peter was happy to lend the boat to me and back then we had three Melges 24s in Croatia. Davor Jelaca, the owner of the oldest boat in the fleet, Blue Label CRO 006, has always said how great is this boat to sail. I started to encourage my friends to buy these boats to create a fleet and take it seriously with creating a series of events around the coast. A great feature of the Melges 24 class is the fact that it gathers not only top sailors, but also successful business people, who have a passion for sailing. Among others Luka Šangulin, Miroslav Reljanovi? and Matija Longin, who used to sail also offshore boats, jumped in and perform regularly at Croatian Melges 24 regattas now. We have a great support of these guys in growth of the fleet and organizing regattas. Luka was starting in the class only recently, but was already very competitive at the Melges 24 Europeans in Portoroz. The same way the sailors of different Olympic classes saw this as a wonderful chance what we never have had before, to sail against each other with bunch of friends. Now we have six more teams who are looking for the boats and we are in the process of confirming the venues for 2022 eager to start the season in January again," Filip said enthusiastically.

A high-level inaugural Melges 24 Croatian national championship
On the starting list there were fifteen teams, fourteen of which under the Croatian flag, and the international touch to the regatta was given by an Italian Strambapapa team led by Michele Paoletti, a sailor from Trieste, who performed at the 2000 Olympic Games in the Soling class. In the crew of Miroslav Reljanovic there was another international star - Norwegian Peer Moberg, who also sailed at the Sydney Olympics in the Laser class.

It was especially interesting that the best Croatian sailors of all generations were competing in front of Split, so on the race course, for the first time ever, there was an opportunity to see the confrontation of Croatian Olympic sailors and medalists of different classes - Ton?ij Stipanovic, Šime Fantela, Tomislav Baši?, Karlo Kuret, Ivan Kljakovi? Gašpi?, Luka Radeli? and Toni Bulaja.

The regatta was led by PRO Marko Mišura, team leader of Croatia at the Rio Olympics; the Jury Chairman was very experienced Alen Kusti? and the Technical Committee was led by IM24CA Chief Measurer Branko Parunov.

Day One – The Italians on Strambapapa in the lead
With a weak wind, three races were successfully completed on the first day of the Melges 24 Croatian Championship. The sailing conditions on the first day were up to twelve knots of Tramontana for the first race, and then two races with Maestral from five to seven knots. With one first and two second places, the best team was Italian crew on the Strambapapa led by Michele Paoletti.

Michele Paoletti said after Day One: “I'm satisfied because we sailed very constantly today. The Croatian fleet is very good and me and my crew are honored to sail in this beautiful race course against so many medalists and participants of the Olympic Games. Our team sails on Melges 24 for quite some time already, and the crew is mostly family and friends. I'm at the helm and my wife is in charge of tactics. It is our advantage that we already have a lot of experience on Melges 24, but I see that Croatian sailors are learning very quickly.”

Day One – After the protest hearing Luka Šangulin (Panjic) takes the lead
More than three hours protest hearing resulted to the disqualification of the Italian team from the second race, which they won. Filip Juriši? on Strilica raised a protest against the Strambapapa crew, after he noticed that during the second race one of the crew members was inside the cabin, which according to the class rules is not allowed. The results after protest hearing saw the crew of Luka Šangulin (Panjic) leading ahead of Filip Jurisic (Strilica) and Ton?ij Stipanovic (Yikes).

The racing was commented by PRO Marko Misura: "Today we had a fight between thermometer and radiators, or between Maestral and Tramontana, so we danced here between directions 240 to 270. It went from six to nine knots and we managed to make two races. Even today the sailing was very even, the fleet is constantly together and each, even the smallest mistake is expensive. In both races we had disqualifications (UFD) at the start, in the first race one, and in the second race two boats, which means that as we go towards the end of the regatta, tensions are rising. We are very pleased that we have been able to do five races in two days because this means that we already have a discard of one result, which is important for the regatta."

After finishing the second day, Karlo Kuret said: “This is the best regatta that has ever sailed in Croatian waters and in terms of all aspects, from competition, through atmosphere to organization. This kind of gathering of sailors from small classes and performance sailing has never happened and that's why I really enjoy every moment of it. It's great that the young sailors from the Olympic classes entered the class - Šime, Ton?ica, Bambi and Gašo, and we as veterans are here too, to annoy them a bit, so everything is as it should be. We just commented this morning that we are missing only Mate Arapov and my brother (Ivan Kuret) so that we can all be in the class. The sailing is excellent, we did five excellent races in two days, and in each there was a real fight. On each race, five boats crossed the finish line within a few seconds. Pure enjoyment to enjoy!"

Final Day to decide the title
At 10 o'clock the fleet of fifteen Melges 24 boats sailed out to Baluni Bay to start sailing on the last day of the Croatian National Championship. After five races held, the situation was very uncertain as six top crews are within three points.

Ton?i Stipanovi?, the helm of team Yikes, who was in the fourth position, commented the situation before the final day. “The regatta is really great and we all are really enjoying sailing. I took over the helm of Yikes since Tonko Kuzmani? couldn’t come. I would be more pleased if we were able to do some more training, but it is what it is. We entered stress-free to a regatta and we sailed really well. Yesterday, however, in the first race, I made one wrong decision, which cost us a little bit better result. But, I'm satisfied after five races. The results show that the fleet is really strong, we are all in a few points and I think, this final day will be very tense, because it is not a small thing to win the first national championship in Melges 24 class!”

Grand Final – Šime Fantela and Tutta Forza are Melges 24 Croatian Champions
On the third day of the nationals, the wind was long awaited, and a solid Yugo finally built up just after 13 o'clock and two races were held in great conditions. Sailing in front of Žnjan, in both races Šime Fantela’s team took fourth place, which was enough for them to triumph at the national championship. The crew of the boat Tutta Forza from JK Uskok with Šime Fantela, Jakov Šokota, Mihovil Fantela and Antonio Arapovic are claiming the title of the inaugural Melges 24 Croatian Championship.

In the end, they were tied on points with team of Luka Šangulin on Panji? with Noa Šangulin, Tonko Ramesa, Tomislav Basic and Duje Frzop in crew, but Tutta Forza won the title thanks to scoring one more bullet than the team from the Briva JK. The Bronze of the Melges 24 Croatian National Championship was grabbed by team Iggy of Karlo Kuret with Zlatko Vodanovi?, Denis Stanojevic and Bruno Gašpi?.

The first ever Melges 24 Croatian Champion Šime Fantela said: “The regatta was fantastic and this was a unique opportunity for me to sail against numerous Croatian Olympians, with which I otherwise have no chance to compare my strength. We did seven races and a great weekend is behind us. I’m very much looking forward to the upcoming challenges in Melges 24 class!”

Overall victory of the regatta was claimed by the experienced Italian sailor from Trieste, Michele Paoletti and his team on Strambapapa with Giovanna Micol, Giulia Pignolo, Giacomo Degvardo and Stefano Ciampalini. The Italians confirmed the victory by scoring two bullets on the final day.

The dates and venues of the 2022 Croatian Melges 24 Sailing Series will be announced shortly.