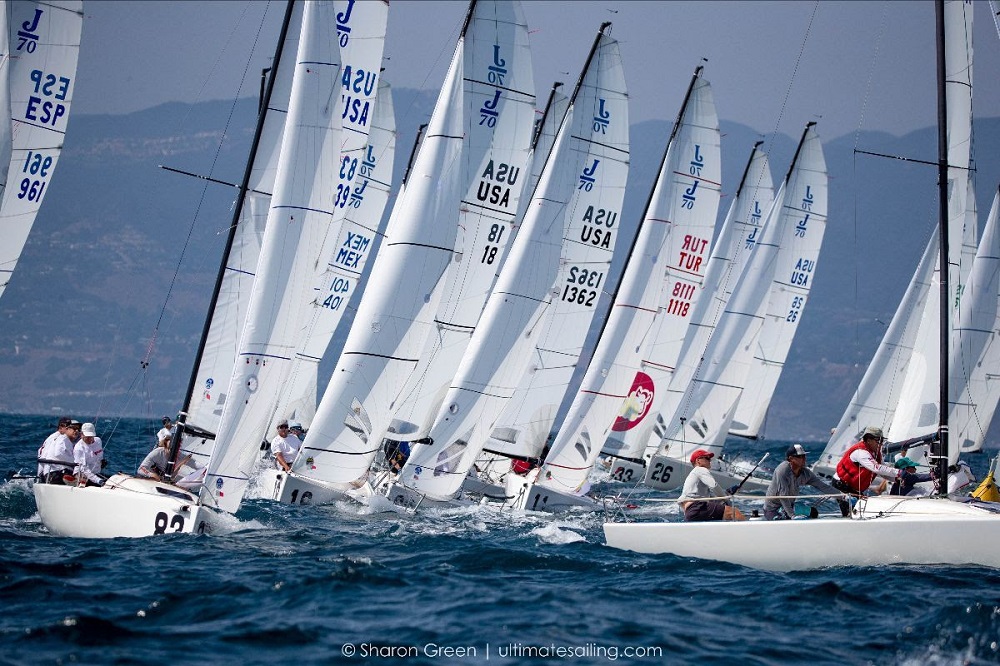 A welcome wind materialized this morning and by noon everyone knew: today was the day! Chatter on the radio declared westerly breezes of 6 to 8 knots as the stage was set for moving day.

A light haze hung over Santa Monica Bay as the Race Committee set the course at 1.1nm at 245 degrees. Starting under the U Flag, with the threat of a Black Flag looming over the 61-boat fleet, the race commenced cleanly with an All-Clear.

The fleet fanned out as far as the eye could see, evenly choosing the left side of the course, the right, and the space in between.

Magic Maggie McKillen pulled another one out of her hat as Magatron horizoned the fleet in Race Four, finishing ahead of second place To Nessa, from Brazil, by nearly one minute. Dark Energy – who’d rounded the first weather mark in fifth - continued her climb through the ranks to finish third.

After fleeting mid-race shift to 235 degrees, Race Five was set at 250 degrees. Principal Race Officer Mark Foster shortened the course to 1.0nm and spread the start line to facilitate a clean start and swift race. Even so, there was a series of General Recalls leading Foster to hoist the Black Flag: his threat echoed over the bay on the many VHF radios tuned in. The Coll family from Uruguay, in Farrista – who’d had an impressive fifth place finish in Race Four – were ousted; along with team Morenita, from Chile.

Catapult, helmed by Joel Ronning, 2016 World Champion and 2017 North American Champion, took that race, followed by To Nessa, continuing a scramble up the leaderboard. Peter Duncan and Relative Obscurity returned to form, after a middle of the pack finish in Race Four, to finish third.

Organizers had planned for a 10-race series, but with Thursday and Friday’s light zephyrs, at best could target an eight-race series. And with the completion of five races organizers and sailors breathed a collective sigh of relief. Sufficient races under their belts meant each team could axe their worst score (as stipulated in the Sailing Instructions) and the leaderboard again shifted like the wind.

The weather changed too: as the skies turned grey, the wind increased, and seas churned. By Race Six the breeze had built to 12 to 14 knots, which resulted in another General Recall and Black Flag start.
Bruce Golison and Midlife Crisis – victor of the J/70 Pre-Worlds – won that race.

Jose Maria Torcida’s Noticia, the event’s only entry from Spain, took second as Joel Ronning and Catapult continued their ascent.

A fourth-place finish by Peter Duncan and Relative Obscurity, and fifth for Savasana and Brian Keane, solidified these two rivals in the top tier overall. At the end of the day Duncan sat with 24 points to Keane’s 31, with Grondin and Dark Energy wedged in between.

Sixty-one competitors, of all ages and from 11 nations, have been competing in the event hosted by Cal Yacht club. And while many are competing with family members, like the Coll family on Farrista and the Ducasse Sailing Team from Chile, some are competing against family: like Bruce and Jay Golison, on Midlife Crisis and It’s all Good, and Maggie and Ryan McKillen on Magatron and Surge, respectively; and the Janovs.

Jeff Janov is a lifelong sailor from Marina del Rey, with a progression of competitive campaigns on vessels from Moore 24s to, Schock 35s, J/105 and Farr 40s. “When my kids were younger, I wanted them to sail with me, but the Farr was too big, so we got a J/70 so the kids would sail with us,” Janov explained.

His kids are Ryan (21), Grant (18) and Jordan (15), and they are sailing this event with Reddin Kehrli (16) and coach Willie McBride (30) on the cleverly named Threatening Minors: a play on the name of Dad’s boat – Minor Threat.

“The J/70 Worlds would be a really good experience, we thought, with more tactical racing,” said Janov. “And it has been. They worked on their boat, got it ready, working until 1AM to get things ready, and got through measurement and to the start line.”

“The racing’s been really hard,” admitted Jordan Janov. “If you can get a good start that’s what you really need and that’s what we’ve been working on the most.” Their standing has been steadily moving up, with two top-10 finishes, in the top third of the fleet at day’s end.

“Growing up and meeting people in the sailing community has given them terrific role models,” said Jeff Janov. “I couldn’t think of anything better.”

And as for competition?

“I think when racing against Dad: we want him to do better than us, but at the same time we want to beat him!” announced Jordan.

And what does Dad have to say? “I’d love to beat them! Just like I’d love to beat any fantastic competitor. But at the same time, if they beat me, I’d feel really good about that too. It’s a win-win.”