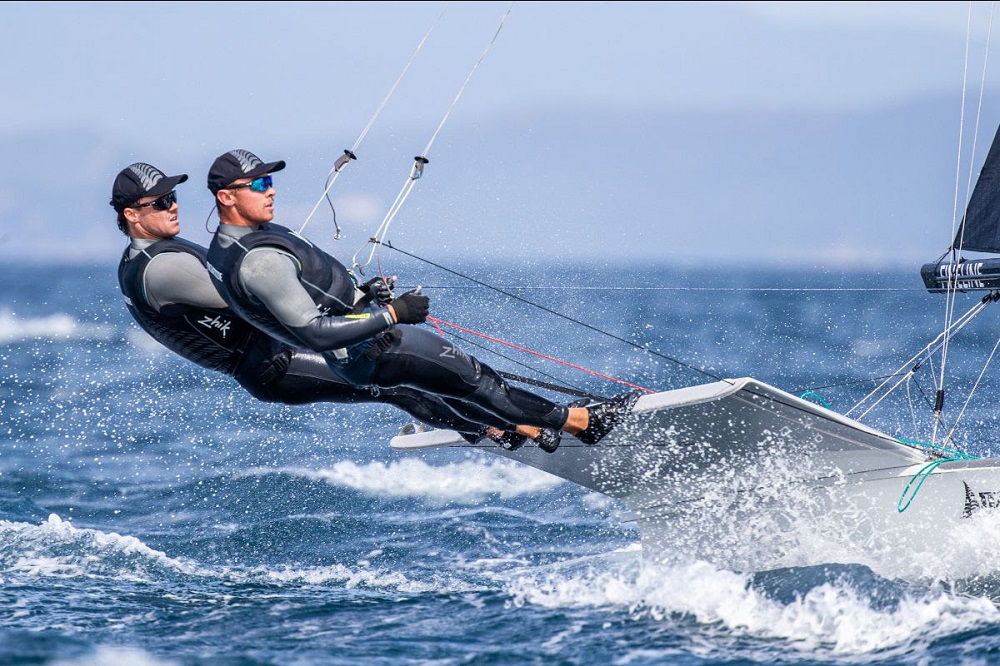 Good start for Kiwis in Hyeres

The New Zealand sailors are well placed after the first day of the French Olympic Week regatta in Hyeres, with five boats in the top 10 and others not far behind.

Strong, gusty winds of up to 30 knots and choppy seas off Hyeres often made it challenging for the 750 sailors from more than 50 countries so it was important for the Kiwi contingent to get off to a good start to the six-day regatta.

Veerle ten Have continued her strong form from a couple of weeks ago at the Princess Sofia Regatta in Palma and is fourth overall in the women's iQFoil. Tom Saunders is fifth in the ILCA 7 (Laser), Isaac McHardie and William McKenzie seventh in the 49er, Micah Wilkinson and Erica Dawson seventh in the Nacra 17 and Alex Maloney and Olivia Hobbs ninth in the 49erFX.

There will have been a number of interested eyes on New Zealand's other 49erFX crew - Jo Aleh and Molly Meech - considering this is not only Aleh's first international Olympic classes regatta since winning silver with Polly Powrie in the women's 470 at the 2016 Rio Olympics but also her first in a new boat.

The pair were sixth and 12th in their two races today to leave them 17th in the 38-boat fleet.

"It was a bit of a hectic day for my first day racing on the Olympic circuit for quite a long time, with plenty of breeze," Aleh said. "Molly has obviously done it more recently and is a lot more on to it than me but I felt like I was out of my depth at times.

"We had some good moments, and actually led around the top mark twice today. It was just the old downwind letting us down. But we are pretty happy with how we are going.

"It was pretty touch and go as to whether we would actually do this regatta so this is really just to see how we are going and to underline the things we need to work on because we know there’s a lot. Hopefully there’s a little less wind tomorrow so we can do a little bit more racing on the downhill sections also."

Ten Have did plenty of that today, with five races in the women's iQFoil. The 21-year-old sailed consistently well, with five scores inside the top 10 including a second in one race, but was left drained by a brutally demanding day.

"I came off the water and had to lie down for 20 minutes because I was so tired," she said. "I don’t think I’ve been so physically tired from racing before.

"But it’s exciting and very encouraging. It was good to see that I am catching up in the wind because that was my weak point in Palma."

A big focus for Saunders this week will be his starts because the ILCA 7 world champion was left frustrated after Palma, despite a top-10 finish there. He banked a second and third in his two races today - the ILCA 7 is split into three fleets - to be fifth overall and fellow Kiwi George Gautrey is also well in the mix in 11th.

"It was a good day for me today," Saunders said. "I had a couple of things I really wanted to get out of this week coming off Palma which was mainly to do with my starts, so the most important number for me at the moment is two from two for starts so I’m pretty happy with that. I seem to be making some good progress there. It’s nice to have a couple of good scores as well so it sets me up for a good week."

There was plenty of action on the 49er course, with wind gusts of 25-30 knots keeping everyone on their toes, and the trio of New Zealand boats in the fleet emerged in decent shape.

McHardie and McKenzie posted three top-10 results and Logan Dunning Beck and Oscar Gunn are also in the hunt in 14th.

"It wasn’t quite survival [mode] but very close to it," McHardie said of the conditions. "It was a solid day for us putting down three keepers.

"It’s going to be a long regatta with it being a six-day regatta and every point is going to count so, all in all, we're pretty happy."

The conditions are expected to ease for the second day of racing tonight.

Results and standings after day 1 of the French Olympic Week regatta in Hyeres: