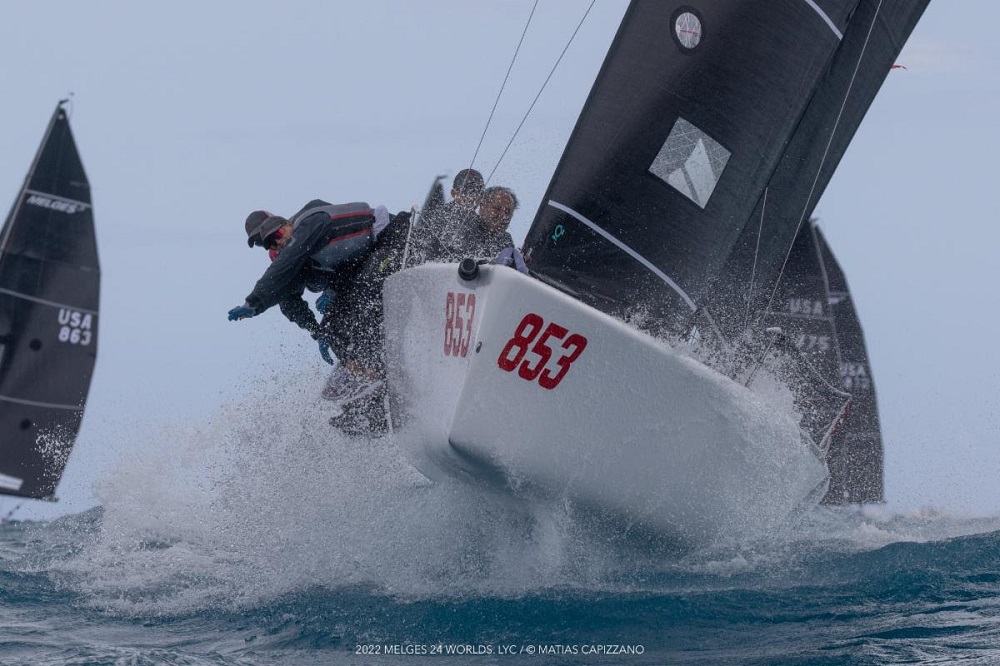 Melges 24 Worlds Event Chair and PRO Tom Lihan from LYC said today was a perfect example of the conditions in Fort Lauderdale. “There was a predicted shift from the North-West to the North-East and we had many competitors, who wanted to wait at the dock, but I said no, and this shift happened exactly between 10:30 and 11am, so we went out and had our first warning signal exactly as planned at 11 am. Wind built up all day long up to perfect for the Melges 24 boats,” was Lihan more than happy with the day.

“Winning a race was fun!” said Richard Reid at the dock. “Sailing out there was pretty challenging, but we had a great start from the half of the line and once we were able to tack out we were able to sail free, however Harry Melges IV gave us a good scare right at the bottom when he came in in the other side and made it very close, but we were able to kick it off.”
Click here for an interview with Richard Reid

Consistency was a hard to come by commodity throughout the fleet today and eight teams out of the top ten boats at the end of the day are counting at least one double digit score from today’s races. But with six of the 12 scheduled races completed, all competitors are now able to discard their worst race placing. Having been able to discard their 15 points garnered by fouling the I-flag in race one today, Bora Gulari and his New England Ropes (USA, 15-7-2 today) still keeps its lead.

Bruce Ayres aboard Monsoon (USA, 2-3-7) posted a second, a third and a seventh place today, and dropped twelve points from yesterday, claiming the second place on the provisional podium.

The discard also favored Peter Duncan, who finished today’s racing with two bullets and a fifth for his Raza Mixta and dropping a 13th place from yesterday to jump from ninth place overall yesterday to third today.

Victor Diaz de Leon, tactician of Raza Mixta was happy with their day. “We got well off the line, we were going well, had a few lucky breaks and ended up with a great day. We are especially happy, because there is a strong competition and a lot of great sailors at the event and there’s a lot to looking forward to yet!”

Harry Melges IV, who was keeping his second position in overall after six races for his Zenda Express (USA, SCP11-2-11), added a 20% scoring penalty to his score from the protest, which Raza Mixta logged in for Zenda Express tacking in front of it in Race 4, where Raza Mixta had to the head up to avoid contact and was overlapped by two meters to Zenda Express's weather side once she completed her tack. This penalty drops Zenda Express to fourth place, one point behind the Top 3, and five-point margin ahead of Laura Grondin’s Dark Energy, lying in fifth overall now.

In the Corinthian (no professional sailors allowed) division, Italian team Taki 4 steered by Niccoló Bertola is keeping its leading position (ITA, 6-6-19) completing the overall Top 10 today. Sunnyvale of Fraser McMillan (CAN,22-14-13) is in second and 3 ½ Men of Steve Suddath follows as third (USA, 12-17-14).

The racing will continue Friday, May 13 with a first warning signal scheduled again for 11 am.