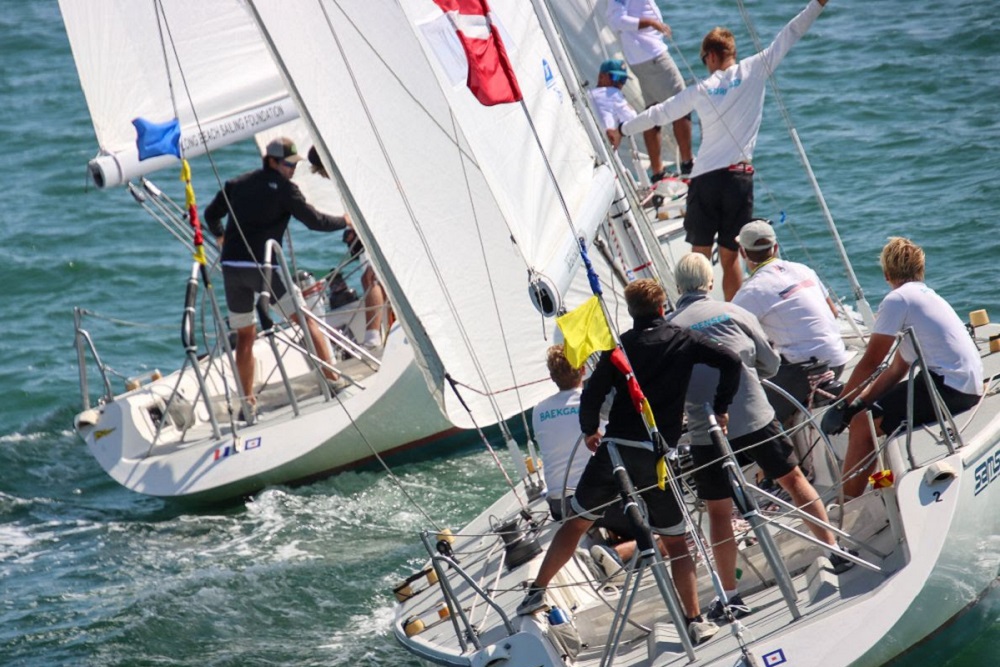 It was evident today, on Day Two of the Congressional Cup regatta here, that racers have shaken off any dust or rust caused by the pandemic pause and surged into full form.

Racing in the five-day regatta – hosted by Long Beach Yacht Club and as part of the World Match Racing Tour – tightened up in both position and proximity as the ten teams got in the groove with the Catalina 37s and with the venue off Belmont Veterans Memorial Pier.

Amplified by winds of 10 to 13 knots, there were several clashes on the course. Competitors also skimmed the pier – where dozens of spectators were rapt with astonishment – and even buzzed the Race Committee boat.

“Centimeters!” described Principal Race Officer Randy Smith, of how close “the Battle of Balboa” was – referring to Balboa Yacht Club’s entries Jeffrey Petersen (USA) and David Wood (USA), both of whom qualified in the Ficker Cup last week. “I honestly braced for contact,” he remarked, of the match which was won by Petersen, one of his three victories today. Petersen sits in a precarious fifth place position behind Taylor Canfield (USA) 10-2; Johnie Berntsson (SWE) 9-3; Eric Monnin (FRA) 8-4; and Emil Kjaer (7-5).

“The run for the semis is on and every single point counts,” noted Monnin. “Probably it’s going to be a one-point decision, if you make the semis or not.”

Only the top four teams will advance to the semi-finals and a chance to win the Crimson Blazer. Racing is expected to continue to heat up with only six matches remaining in the double round robins.

Collisions and altercations are common in the aggressive game of match racing, and LBYC organizers have on-the-water umpires to make real time decisions on fouls and related penalties.

A bos’n is stationed on the course to repair or replace equipment on the spot, and Chief Umpire Flavio Naveira chided competitors saying, “No train wrecks please!” in an effort to keep racing on track and on time.

New to Congressional Cup rules this year is an exclusion zone at the Belmont Pier to restrict just how close competitors can come to the concrete structure and wings which extend 120-feet east and west. In 2018, competitor Harry Price proved how close race action is to the audience on the Pier; when his boat knocked a lamppost off. That corner is now good-humoredly known as ‘Price Point.’

Racing will continue through Sunday for the Congressional Cup and Crimson Blazer, starting at 11:30AM daily, directly off the Pier at 15 39th Place, Long Beach, Calif. A Saturday afternoon race will pair up umpires and VIPS with competitors for a ‘Race to the Bar’ and disqualified racers get a chance to earn some cash in Sunday’s consolation fleet race.