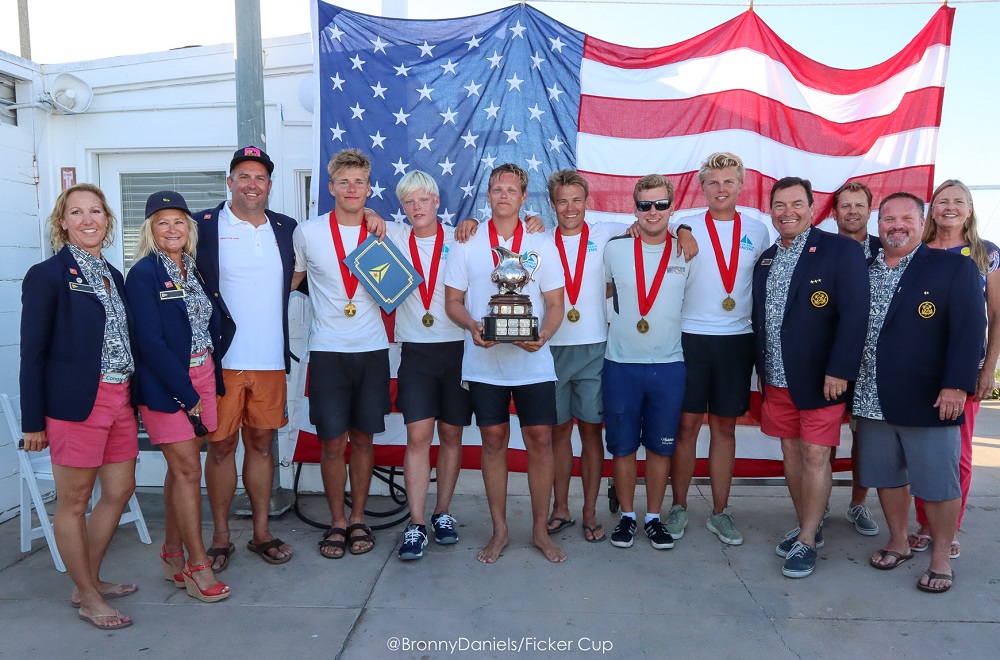 Emil Kjaer (DEN), representing the Royal Danish Yacht Club, has won the 2021 Ficker Cup, besting a field of eight of the leading match racing skippers from the US and overseas, in this Grade Two event hosted by Long Beach Yacht Club.

It’s said that “Old age and treachery will always beat youth and exuberance,” but that did not prove the case at the long-awaited Ficker Cup regatta. Kjaer, 20, is one of a trio of young sailors who have plied the youth match racing circuit this summer and dominated the Ficker Cup. Jeffrey Petersen (USA), 19, finished second, and David Wood (USA), 20, finished third. Both hail from Balboa Yacht Club, Calif. Each had their day, and all three have qualified for the Congressional Cup, which begins Sept. 14.

Ficker Cup racing commenced Friday Sept. 10 in spectacular conditions that held all weekend. Petersen came out of the gate strong: finishing 6-1, losing only to Wood.

Kjaer, Petersen and Wood had been clashing all summer long. In June Petersen won the US Youth Match Racing Championship for the Rose Cup and followed up with a victory in the Governor’s Cup in July – where he edged out Kjaer in the finals. Wood turned the tables and triumphed in the International Youth Match Racing World Championship in mid-August, with Petersen in second, and Kjaer in fourth.

Petersen had noted the pros and cons of competing successively against the same rivals. “You start to learn their tendencies, and we make that a big part of our sailing plan: to learn other people’s habits and see where we can expose that. So we’ve got a few things in our playbook we know that they like to do … and use that against them and catch them off guard: it’s really to our advantage.” “But the same thing goes both ways!” Petersen noted. “I’m sure they’re doing the same thing with us.”

Saturday was Wood’s. He finished the day undefeated, topping the leaderboard with 12 points, and earning the right to select his opponent in the semi-finals.

In Sunday morning’s draw, Wood selected Kjaer; an interesting choice he might later regret. Petersen had finished 10-4; Kjaer 9-5; and Pearson Potts 7-7 – who won in a tie-breaker against Chicago Yacht Club’s Peter Holz (USA). Typically, the frontrunner chooses the fourth place finisher. But Wood chose Kjaer – who would decisively eliminate him in the semi-finals.

Semi-finals, petite-finals & finals
Petersen was left to duke it out with Potts, a two-time US Match Racing Champion, in the semis; and defeated him in three matches.

Kjaer took on Wood, winning the first two matches, but Wood rebounded on the third. The wind had built to 15 knots, and in the fourth match, Kjaer forced Wood OCS and maximized the advantage, to win what would be the final match.

Continuing on to the petite finals, Wood defeated Potts in that first-to-two series. In the finals for the Ficker Cup, Kjaer once again won his first two matches but fell to Petersen in the third. It was a short reprieve, as Kjaer returned to form in the fourth match to capture the win and the Ficker Cup.

“We are really very happy," said the young Dane. "Our main goal was to do as good as possible and try to qualify for the Congressional Cup, but this is better. And we are so grateful that there’s qualifiers for events like this – it gives young guys like us an amazing chance to join the event and I can’t wait to be able to sail against sailors like Taylor Canfield and all great sailors like that, it is really exciting for us.” He credited his team of Gustav Wantzin, Mads Poder Witzke, Bastian Sorensen, Nicolai Baekgaard and Joachim Aschenbrenner.

Ficker Cup Chair Lisa Meier beamed with pride as the racing ended and she took a victory ride aboard Kjaer’s Catalina 37. “I am so impressed with the ability of the competitors, race organizers and yacht club to pivot when necessary and throw all their best efforts at bringing this regatta to life.”

Of the top three winners, she exclaimed, “It’s exciting to see the level of racing, commitment and focus they bring to the sport, and to see that American youth are focused on participating at the highest levels. And I’m extremely pleased to see they all feel there is a roadmap to America’s Cup, through match racing programs, such as ours, being held in this country and around the world.”

Meier pointed out that Long Beach Yacht Club is invested in youth sailing and building a lifelong appreciation of sailing among the community. She will chair the 2022 Congressional Cup and noted, “We are using the Ficker Cup and other regattas to ensure our community members are prepared and ready to compete in the 2028 Olympic Games, in some capacity. LBYC is making a concerted effort to ensure that all qualified officials and competitors have a platform to compete and showcase their skills.”

And while all eyes now turn now toward next week’s big event, the honor and prestige of the Ficker Cup itself cannot go unnoticed. This respected Grade Two regatta was established by Long Beach Yacht Club to honor sailing legend Bill Ficker, whose own meteoric climb began with summer sailing in Newport Beach. A Star World champion in 1958, his America’s Cup win in 1970 spawned the slogan “Ficker is quicker.” He won the Congressional Cup in 1974.

Dedicated in his honor in 1980, the Ficker Cup became known as the gateway to the Congressional Cup – which is the gateway to the America’s Cup. He dedicated the beautiful trophy Kjaer received today. Before Ficker’s passing in 2017, he would award it personally.

On Friday, Deon Macdonald, Ficker’s daughter, had greeted the teams at LBYC, saying, “How lucky are we to be able to enjoy the sport of sailing, which we all love, with our friends.” That sentiment was repeated today.

“There’s a reason everybody wants to sail Ficker Cup and Congressional Cup: the venue, the club, the people, the volunteers – it’s all just awesome,” noted competitor Peter Holz. ”It’s been champagne conditions out here, and just incredible to be at LBYC.”