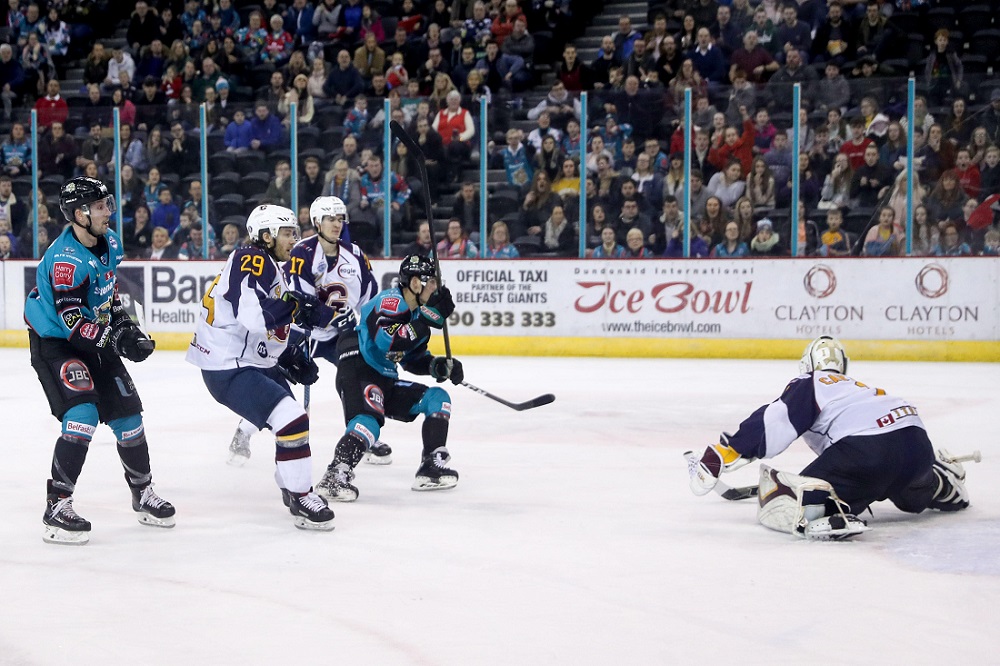 Giants One Point Back After Higgins Winner

Chris Higgins’ game winning goal in overtime at 61:38 saw the Stena Line Belfast Giants complete a late comeback to defeat the Guildford Flames 3-2 on the opening night of the weekend double header between the two sides.

Trailing 2-1 at 57:50, Colin Shields’ powerplay strike brought the Giants level with Higgins on hand to continue the home side’s league winning streak to six games. The Giants now sit one point behind the Cardiff Devils at the top of the Elite League standings.

Tyler Beskorowany backstopped the Giants to the win with the home side missing Guillaume Gelinas, Pat Dwyer and Andrew Dickson.

The Giants and Flames played out an end-to-end opening 20 minutes of action in Belfast. Despite outshooting Guildford, the Giants remained deadlocked at 0-0.

The middle period was almost a mirror image to the opening 20 minutes with both sides cancelling each other out. However this time it was the visitors who outshot the Giants as Tyler Beskorowany pulled off a string of saves to keep the game at 0-0.

It was the Flames who opened the scoring when John Dunbar pounced on a turnover in the Giants zone to finish cooly low into the Belfast net at 44:30.

Guildford’s goal brought life to the game. The Giants drew a Flames penalty soon after and the home side capitalised as Jordan Smotherman and Chris Higgins combined well to feed the puck to Blair Riley who had time and space to fire into the top shelf at 48:41.

Guildford restored their one goal advantage at 54:19 with Ben Davies scoring the rebound, asissted by Evan Janssen and T J Foster.

Yet again, the Giants responded - this time it was Colin Shields with a perfect effort, assisted again by Smotherman and Higgins, as the home side equalised at 57:50.

The Giants took the play to their visitors in the sudden death overtime period and, at 61:38, they got their reward. Kyle Baun and Jim Vandermeer teamed up as Chris Higgins hammered home the game winning goal to send the Belfast crowd wild in the opening game of the weekend between these two sides.