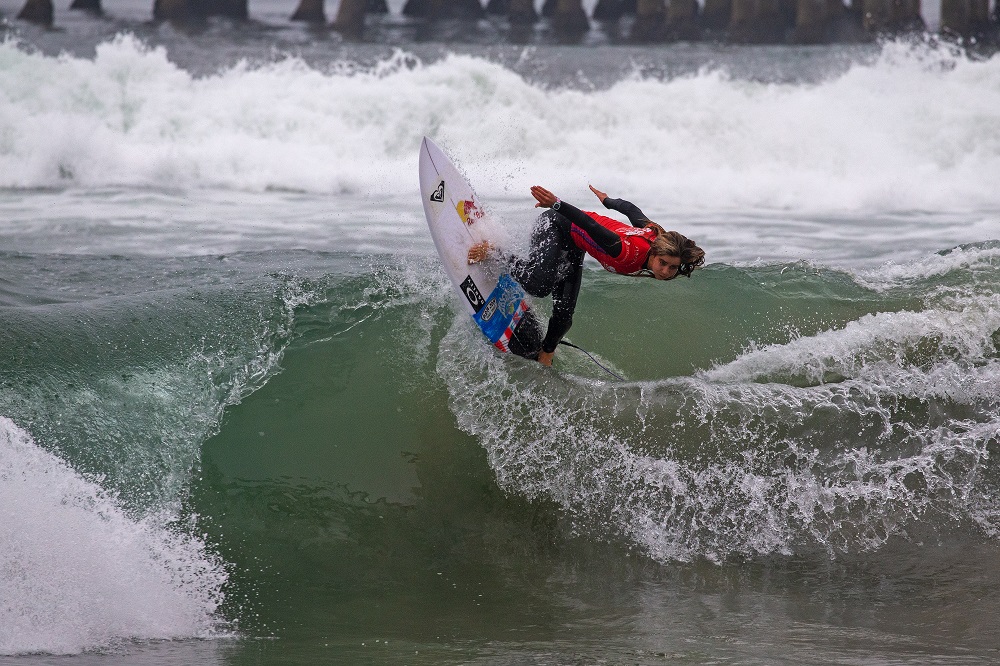 Young Guns dominate amongst the best

The US Open of Surfing Huntington Beach presented by Shiseido, the opening stop on the 2021 World Surf League (WSL) Challenger Series (CS), fired into Round 3 action for both men and women along with a brand new, three-to-four foot swell that had competitors delivering world-class performances. Women’s one-on-one bouts unfolded to determine Quarterfinalists alongside the men’s three-man heats to cut their field to just 16 competitors.

The men’s field is now down to the remaining 16 competitors after a flurry of action in their Round 3 affairs. One of them is Team USA Olympian Kolohe Andino (USA) who, due to injuries, finished the Championship Tour (CT) season at No. 37. Spectators were treated to Andino’s aerial display along with his ferocious backhand attack to garner a 14.50 (out of a possible 20) heat total in a stacked heat against former CT competitor Patrick Gudauskas (USA) and event standout Nolan Rapoza (USA) - who continues a Cinderella run through the US Open.

“I was watching the waves before that heat and I still think it’s a little peakier (more south),” said Andino. “With this swell’s longer interval and even though they were still coming in at the pier, they were more straight on so I think it was right and I ended up getting the best wave of the heat on that left where I was.”

In dramatic fashion, 2018 US Open runner-up Griffin Colapinto (USA) (pictured in key art above) found his way into Round 4 with an excellent 8.00 (out of a possible 10) in the dying seconds to go from third-place to first in his Round 3 battle with Australia’s Liam O’Brien, also advancing, and New Zealand’s Billy Stairmand. The former US Open Pro Junior victor now looks to add the Challenger Series title to his resume heading into the weekend.

“It’s really cool and something I try to take pride in in my career,” expressed Colapinto. “Any time I get that opportunity for something like that I enjoy it, because I know it’s hard to do - it’s a hard challenge. If you can do that you have a good chance at being a World Champion which is what I’m striving to do.”

Former CT competitor Alex Ribeiro (BRA) wasn’t able to secure his spot amongst the world’s best and now looks to the Challenger Series for a chance to requalify. He returns to Round 4 of the US Open, with a brilliant showing in Round 3, after a Semifinal appearance in 2019 and has his ambitions set even higher.

“I was looking for the left that goes into the pier because it has that lip sometimes and I found that wave on priority so when the wave came I just had to do the air,” explained Ribeiro. “I didn’t have a good Tour this year but I have another chance to get good results and get back there next year. I love this place, I had a third here last time, and now I want to go better and make the Final.”

Women’s Next Generation Continues to Surge Alongside CT Elite

Team USA Olympian, and CT World No. 6, Caroline Marks earned her spot into the Quarterfinals after taking down former CT competitor Dimity Stoyle (AUS) in the first heat of the day. Two-time US Open winner Courtney Conlogue (USA) lit up the arriving swell in defining fashion and will join Marks in the Quarterfinals. However, for Conlogue, competing isn’t the only important thing at the US Open in 2021 with her charitable spirit shining.

“I feel like it’s part of the journey to give back what’s been given to you,” said Conlogue. “All of the different organizations I work with, I’m so grateful to share my love of surfing. I’m blessed to be able to do this all the time. It gives you a lot of gratitude and a lot to share.”

Coco Ho (HAW) finessed her way to a clutch Round 3 win over darkhorse threat Sarah Baum (ZAF), but fellow Hawaii competitor Bettylou Sakura Johnson (pictured in key art above) elevated the level of competition to finish off Round 3 with a blinding performance over Challenger Series threat Alyssa Spencer (USA). The 16-year-old blitzed her way to a 14.50 heat total and made her statement as an event threat heading into the Quarterfinals.

“I had time to watch the waves and analyze the lineup a little bit more and had the benefit of watching the conditions,” explained Johnson. “After I got that first score I thought, okay now I can hammer this second one so that’s what I wanted to do. My board is a bit light for me but it’s really helping me weave through the slow sections and I’m loving it right now.”

Caitlin Simmers, the 15-year-old, Oceanside, California, competitor is on a tear at this year’s US Open of Surfing and notched another 7.00 against Portugal’s Yoland Hopkins (PRT) to secure her spot into the Quarterfinals. Simmers would become one of the youngest, next to Malia Manuel’s (HAW) win at age 14, competitors to win this event and add yet another massive win to her already impressive resume - and a shot at qualifying for the CT.

“I don’t want to use an excuse for that fall but it was pretty cold at the start since those sets came just before our heat and then ours went slow,” expressed Simmers. “But, it was kind of a blessing in disguise because then a sick wave came through and I was in position for it. You had to get the big outside turn to get above a 5-point ride so toward the end it didn’t look like it had a section .”

“I was just stoked to get that wave at the 18-minute mark and didn’t have to wait any longer because it was tough out there,” said Sawyer. “This is the biggest event I’ve ever surfed in so I came into it with no expectations and now I’m in the Quarters which is crazy. I’ll prepare for the next just by watching what the waves are doing and get a good freesurf in.”

A big push from competitors Sara Wakita (JPN) and Gabriela Bryan (HAW) also earned them a spot into the Quarterfinals for their opportunity toward 10,000 crucial points.