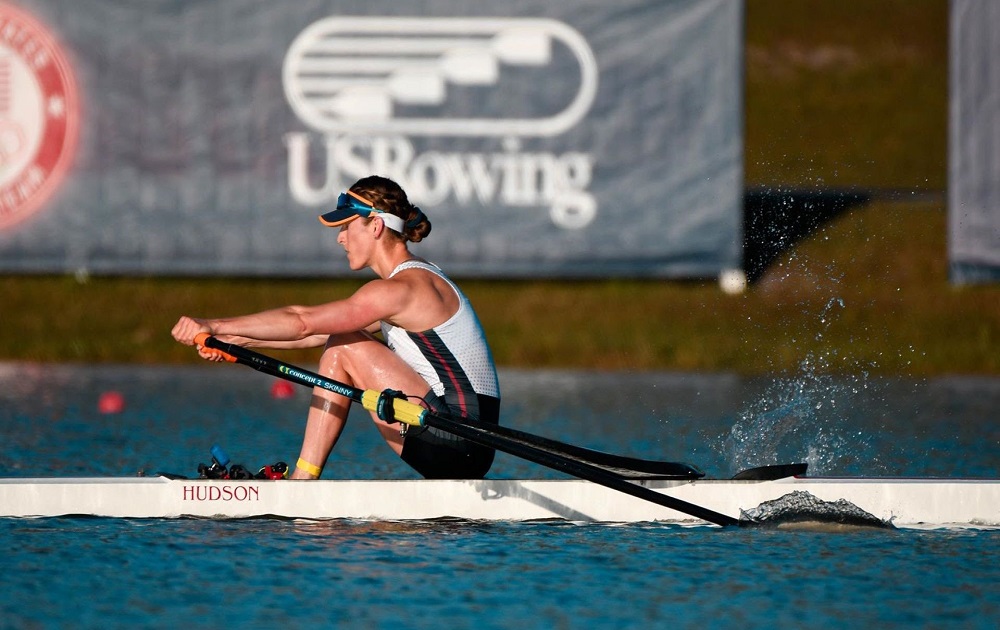 US Women’s Single Olympic Berth Up for Grabs

While five boat classes are being contested during the five-day event, only the winner of the women's single sculls will earn her ticket to Tokyo, pending USOPC approval.

Racing in the first semifinal of the women's single on Thursday morning, USRowing Training Center-Princeton's Kara Kohler (Clayton, Calif./University of California, Berkeley), the reigning world championships' bronze medalist, established an open-water advantage in the first 500 meters and continued to increase her margin over the middle portion of the race. Kohler, a 2012 Olympic bronze medalist in the women's quadruple sculls, crossed the finish line in a 7:51.22, more than 11 seconds ahead of ARION's Kristina Wagner (Weston, Mass./Yale University).

With two to advance to the final, Wagner sat in fourth position through the halfway point of the race before overtaking Craftsbury Green Racing Project's Jenifer Forbes (Baltimore, Md./Northeastern University) in the third 500 and then reeling in Cambridge Boat Club's Cicely Madden (Weston, Mass./Brown University) in the final 500 meters. Wagner finished with a time of 8:02.38, with Madden crossing in an 8:08.38.

"It was very nerve-wracking – the semifinal into the final to be able to have the chance at achieving the goal is pretty nerve-wracking, so I'm happy, relieved, that it's over, and I'm on to the final and have a shot at making the Olympic team tomorrow." Kohler said. "I knew everyone would be pushing pretty hard in the first 1,000 (meters) to stay in the race, so I expected that. I tried to stay as relaxed as possible going into the second thousand and then push away."

In the second semifinal, Cambridge's Gevvie Stone (Newton, Mass./Princeton University), the 2016 Olympic silver medalist in the event, took a lead in the first 500 meters and methodically built her advantage during the middle half of the race. As the scullers crossed the midway point, USTC-Princeton's Sophia Vitas (Franklin, Wis./University of Wisconsin), Boston Rowing Federation's Alison Rusher (West Bend, Wis./Stanford University), and Boston Rowing Federation's Maggie Fellows (Warwick, Mass./St. Lawrence University) were dueling for second position. Vitas continued to hold the second qualifying spot as the boats entered the final 500 meters, but Fellows was able to overtake Vitas in the final 250 meters to claim a place in the finals. Stone won the race in a 7:58.12, with Fellows crossing in an 8:02.12. Vitas finished with a time of 8:04.08.

Tomorrow, Kohler, Stone, Wagner and Fellows will race with an Olympic spot on the line.

"I'm very excited," Kohler said about tomorrow's race. "It's been a long road, lots of ups and downs that have made this journey what it is so far. I'm proud of what I've done so far, and I would love to finish it off and make the Olympic team tomorrow."

In Thursday's first semifinal of the men's single, the four scullers waged a tight battle the entire way down the course, with Malta Boat Club's Leonard Futterman (New York, N.Y./Boston University) pulling ahead during the last 500 meters of the race to claim the victory in a 7:23.43. Riverside Boat Club's Kevin Meador (Berkeley, Calif./Northeastern University), who has represented the U.S. in the event at the past two world championships, held off Penn AC's Thomas Phifer (New York, N.Y./Middlebury College) by less than one second to take the second spot in tomorrow's final. Meador crossed the line in a 7:25.64, with Phifer finishing in a 7:26.23. Mike Clougher (Canton, Mass./Connecticut College), a two-time senior national team member, placed fourth, one second behind Phifer.

"I was happy with today's race," Futterman said. "I've trained against Phifer and raced against Kevin a ton. Big Mike is a competitor. I knew what I had to do out there, so I was just focusing on me and trying to go as fast as possible.

"This year has been great for me in terms of my personal development, my mental development in terms of understanding the role of the sport in my life, and just being very grateful that I have this … This year has been a wild ride for people, and I'm just really grateful that everything has been confirmed of how hard I've been working this year and that I get the opportunity to race tomorrow."

In the lightweight women's double sculls, the Cambridge Boat Club/Sarasota Crew composite boat of Michelle Sechser (Folsom, Calif./University of Tulsa) and Molly Reckford (Short Hills, N.J./Dartmouth College) continued to race in top form, dominating the first semifinal. Sechser and Reckford took the early lead and then pulled away during the middle 1,000 meters, winning the race by more than seven seconds in a 7:32.66. Craftsbury's Grace Joyce (Northfield, Ill./University of Wisconsin) and Christine Cavallo (Windermere, Fla./Stanford University) finished second in a 7:40.08 to also advance to the final.

The Cambridge/Potomac Boat Club duo of Mary Jones (Huntsville, Ala./University of Tennessee) and Emily Schmieg (Philadelphia, Pa./University of Pittsburgh), the 2018 World Rowing Championships' silver medalists in the event, won the second semifinal with a time of 7:43.01, finishing more than 13 seconds ahead of the second-place crew from Mission Rowing of Sophie Heywood (Tempe Ariz./University of Wisconsin) and Sophia Denison-Johnston (Berkeley, Calif./UCLA). The four boats will face off in tomorrow's final.

Penn AC's Charles Anderson (Upper Darby, Pa./Temple University) and Eliot Putnam (Littleton, Mass./Cornell University) overtook Craftsbury's Jacob Plihal (Vashon Island, Wash./Northeastern University) and Mark Couwenhoven (Parkton, Md./ University of Maryland - Baltimore County) in the second half of the race to win the first semifinal of the men's double sculls. Anderson and Putnam crossed the line in a 6:41.98, just over two seconds ahead of the Craftsbury crew.