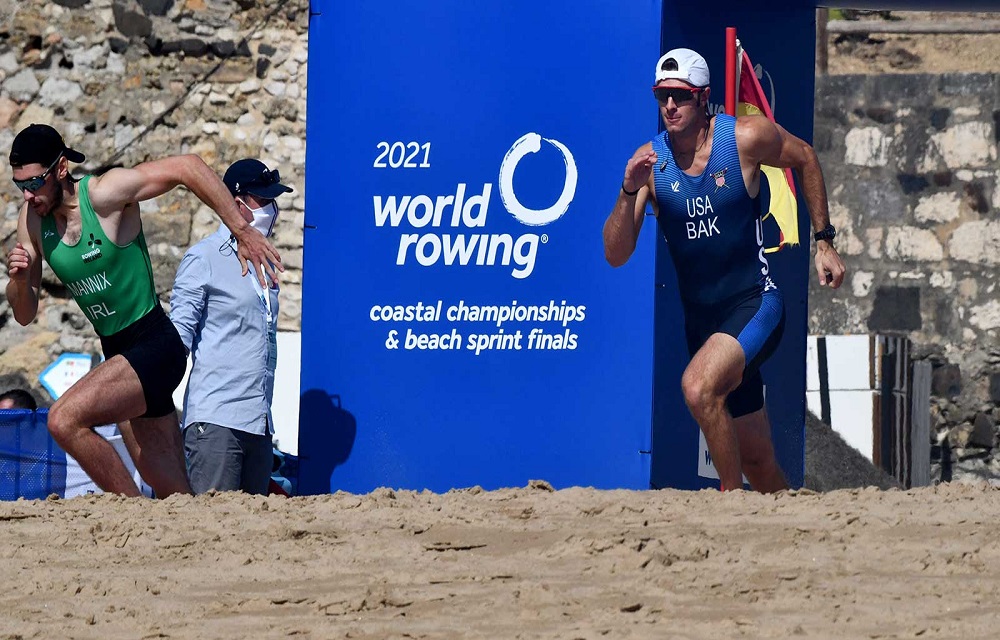 Two time trial wins for US on Day 1

The U.S. won two time trials and all eight boats advanced on the first day of competition at the 2021 World Rowing Beach Sprint Finals in Oeiras, Portugal.

In the men's solo event, Christopher Bak (Cincinnati, Ohio/University of Cincinnati) posted the fastest time in the time trials to advance to Round Three (Round of 16). Racing in the 11th of 13 time trials, Bak finished the course in a 2:38.45. His time was nearly three seconds faster than Lithuania's Zygimantas Galisanskis, who clocked the second fastest time while racing in the fourth time trial. Bak will race again on Sunday.

"I am really happy with my race," Bak said. "However, I think there is more speed to be had in the boat. I'm just glad to be through the first round and (am) looking forward to the upcoming races."

Aidan Ehrismann (Portland, Ore./Leodis V. McDaniel High School) and Joshua Li (Lake Oswego, Ore./Lakeridge High School) clocked the fastest time in the junior men's double sculls, earning the top seed in the quarterfinals. Racing in the second of five time trial races, Ehrismann and Li covered the course in a 2:26.02. Spain finished just off the American's pace, winning the first time trial in a 2:26.44. Ehrismann and Li will race next in Sunday's quarterfinals.

In the women's solo event, Cassidy Norton (Hamilton, Ohio/Ross High School) finished third in the time trial and now will race in Round 2 on Saturday morning. Racing in the first of eight time trials, Norton covered the course in a 3:10.50, finishing behind France's Maya Cornut, who recorded the fastest time in the opening round. Cornut finished with a time of 3:02.52.

Brian O'Leary (Port Charlotte, Fla./Jesuit High School) took fourth in the time trial of the junior men's solo race. Racing in the second of four time trials, O'Leary finished with a time of 3:06.97. He will race in the quarterfinals on Saturday.

Wotovich and O'Leary hit the water a second time later in the afternoon in the time trials of the junior mixed double sculls. The duo finished third overall in a time of 2:43.71. France recorded the fastest time, finishing in a 2:40.89. Wotovich and O'Leary will next race the double in the quarterfinals on Sunday.

Elizabeth Hinley (McHenry County, Ill./University of North Texas) and Kory Rogers (The Woodlands, Texas/Temple University) finished seventh in the morning time trial of the mixed double sculls before coming back to win their knockout race against Japan Friday afternoon. The duo advanced to Saturday's quarterfinals with the victory over Japan. Hinley and Rogers finished with a time of 2:48.83 in the time trial and followed that up with a time of 2:25.99 in the second round.

Beach Sprint racing is contested in a run, row, run combination over a 250-meter, out-and-back buoyed course and uses a time trial and knock-out progression system. The format debuted in 2015 at the Mediterranean Beach Games, and the first global event was the 2019 World Rowing Beach Sprint Finals in Shenzhen, China.

In total, nine boat classes are being contested in Portugal. The U.S. has entries in every category with the exception of the junior women's double sculls.