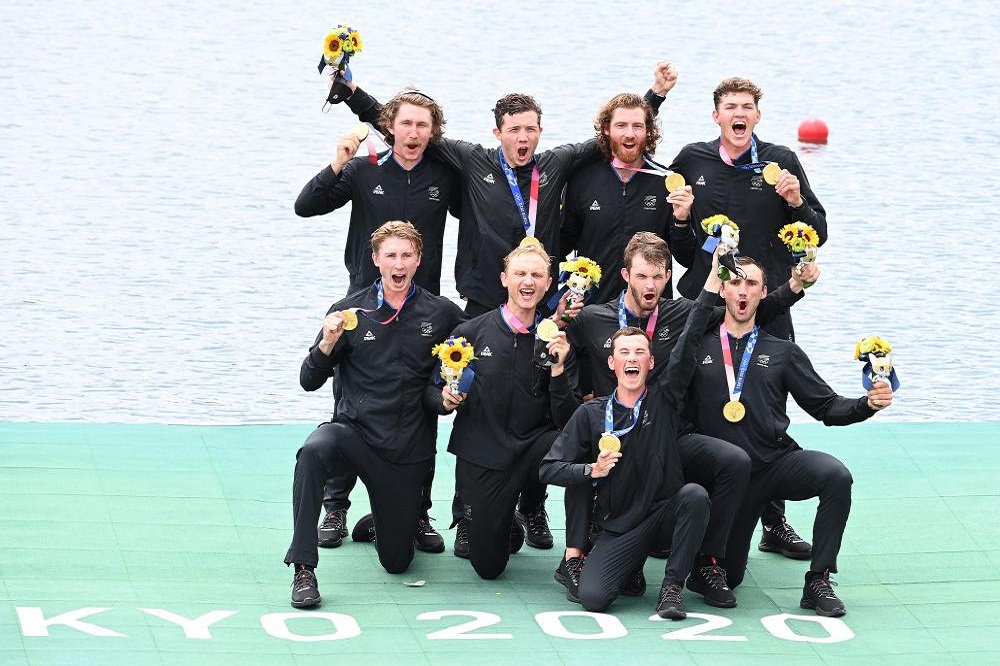 The women’s single sculls opened the finals with the much-anticipated showdown between the experienced Emma Twigg of New Zealand at her fourth Olympic Games and the newcomer to single sculling Hanna Prakatsen of ROC. A fast start by Twigg set the standard and the Kiwi never succumbed to Prakatsen attacks. Twigg won gold and Prakatsen silver. An incredibly gutsy performance for the bronze medal position was won by Austria’s Magdalena Lobnig. Twigg’s finishing time is a new Olympic Best Time of 7:13.97.

After an early lead by Kjetil Borch of Norway, Greece’s Stefanos Ntouskos pushed through at 1’000 metres to win the gold in the men’s single sculls. Behind Ntouskos and Borch in silver position, Damir Martin of Croatia and Sverri Nielsen of Denmark went to a photo finish for third and the photo showed the Rio silver medallist Martin won the bronze. The 24-year-old Ntouskos set a new Olympic Best Time of 6:40.45 and is the first-ever Greek Olympic Champion in rowing.

In the women’s eight, Canada stormed out at the start and never looked back. Despite the best effort of reigning World Champions New Zealand, Canada held them off right to the line to earn the first Olympic Champion title in the women’s eights for Canada since 1992. New Zealand’s silver medal gave the nation their first-ever Olympic medal in the women’s eight and also gave Grace Prendergast and Kerri Gowler their second medal at this regatta after winning gold in the women’s pair yesterday. In the bronze medal spot China held off the reigning Olympic Champions the United States to win the first Olympic medal in this event for China.

The last race of the Tokyo 2020 Olympic regatta was the men’s eight. This boat class has seen an ongoing battle between Germany and Great Britain in recent years with the British winning in Rio to Germany’s silver. Germany then went on to be the 2017, 2018 and 2019 World Champions. Today Germany got out to an early lead in a race in which the margins remained exceptionally tight. So tight that at the half way point just a second separated the top four boats. New Zealand then made its move around 1’000 metres and took the lead. These Kiwis, with two time gold medalist Hamish Bond in the two seat, went on to earn the first Olympic Champion eights title for their country since 1972. A photo finish between Germany and Great Britain gave Germany the silver and Great Britain the bronze.

Today’s three medal haul for New Zealand put them at the top of the overall medals table for the regatta. New Zealand earned five medals, three of them gold (men’s eight, women’s pair, women’s single sculls). Australia came through in second with four medals, two of them gold (women’s and men’s four). The Netherlands was third with five medals which included gold in the men’s quadruple sculls. Overall, 18 nations earned medals.

"This has been an incredible Olympic rowing regatta," says World Rowing’s President Jean-Christophe Rolland, an Olympic Champion in rowing from the Sydney Olympics. "The regatta did not go without issues. The weather caused changes to the programme with two days of no racing. There were some positive Covid cases and there was one boat that flipped. But I give full credit to the fabulous organisation behind the regatta. The Tokyo organising committee made this one of the most organised, well-run Olympic regattas that I have ever been part of. I want to give thanks to everyone involved from the venue organisers through to the volunteers. Your calm, smiling faces greeted me every day despite this being such difficult times."

The eight-day rowing regatta began on Friday 23 July with heats and repechages and semi-finals and concluded on Friday 30 July with race number 130.