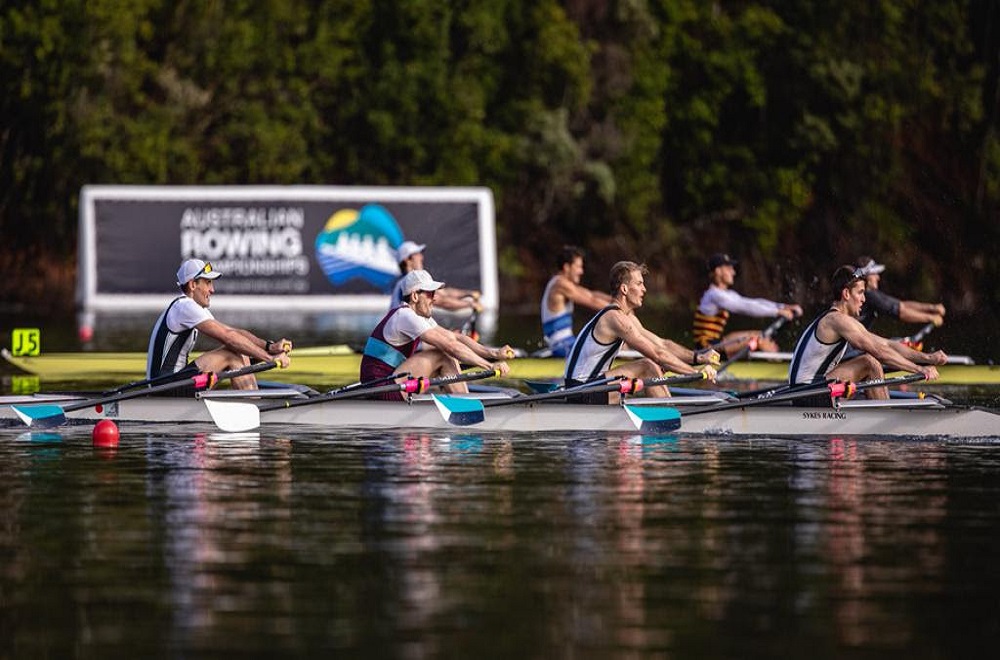 Storms raged overnight in the north of Tasmania, with over 15 millimetres of rainfall dropping over the region overnight, and leaving racing postponed by 30 minutes this morning at the 2021 Aon Australian Rowing Championships. The President of the Jury, Geoff Northam, making this decision due to lightening warnings in the area.

Racing began in earnest for the finals of the Under 17 Coxed Quadruple Sculls, and under gloomy skies and low hanging cloud, with the fluorescent green uniform of Queensland’s Somerville College standing out as they stormed down the course first, winning the women’s division with a commanding lead. The Sydney Rowing Club composite crew won the men’s division; after a slow start, the crew pulled into the lead and won the event by a boat length of clear water.

The Under 19 Women’s Quadruple Scull was a New South Wales composite from Sydney Rowing Club and Kinross Wolaroi School; the combination said that they had not had much chance to train together and were absolutely stoked with the win. Lily Eales, daughter of Australian rugby legend John Eales, said of the race, “Being able to come together and pull it together on the day was fantastic.” Eales is heading to prestigious American college, Yale, a renowned rowing college, though she thinks that she will put her name forward for the Junior Australian team before she leaves. Eales says her father is super supportive of her efforts, “I think Dad’s more excited than me sometimes!”

The Under 19 Women’s Coxed Eight was an absolutely stunning race, with four of the eights battling for the top spot; it was the University of Queensland crew who led from the start with the Loreto – Toorak, Queenwood and Canberra Girls Grammar crews battling it out for the podium finish. The Queensland crew finished first, with the ACT crew picking up boat speed to finish second, with a late sprint from the NSW crew pipping the Victorian crew to take the bronze.

Stroke of the Queensland crew Nancy Duncan-Banks said of the race, “It’s really exciting just to see the whole squad unite and push through and work hard through a tough season, it’s great to get result like this.” Teammate Ellyn Hill, who will join Duncan-Banks in the Queensland Youth Eight to race for the Bicentennial Cup, says this win will give them confidence to challenge defending champions New South Wales in the race tomorrow, “Absolutely, we’ve got a shot!”

The Under 19 Men’s Eight was also a mega-battle with all eight crews in touch with one another the entire way down the course. While the Melbourne University/Ballarat Grammar/Wesley College confidently led and held the first position for the gold, while the Shore School crew held silver position all the way to the line, an almighty battle raged on behind them for the final spot on the podium. Three crews held the third-place spot throughout the race, but it was the St Peters/Scotch College composite from South Australia that nabbed the bronze across the finish.

The Open Lightweight Women’s Quadruple Scull was led all the way by the Adelaide/ANU/Sydney Uni composite crew of Lucy Coleman (SUBC), ANU teammates Sophie Jerapetritis and Anneka Reardon, and Verayna Zilm (Adelaide). The crew beat out local Huon/Mersey favourites, stroked by Georgia Nesbitt, and were ecstatic about the win.

Zilm said, “It’s exciting to win my first Open Lightweight event! The competition here is so good, it helps you race better when you’ve got people to push you.”

Coleman and Jerapetritis will be part of the New South Wales crew racing the Victoria Cup tomorrow, and when asked if this race gave them confidence, Coleman said, “The pressure’s on I think – Anneka steps into the other crew and we know she’s strong – it will be a case of who does the best on the day.”

Zilm will not race the lightweight event, with SA not fielding a Victoria Cup crew, however she is racing the open single scull in the race for the Nell Slatter Trophy. “It will be a bit of a different race tomorrow, obviously going back into a slower boat, but this race was my last weigh-in, so I’m really excited to feel fuelled for tomorrow – I might put on 10 kilos overnight – and try and keep up with the big dogs!”

The Open Lightweight Men’s Quadruple Scull saw the tightest finishing margin yet – just 0.02 seconds between the gold and silver positions. Three crews had two seconds of margin between them for the first thousand metres, but through the third 500m the two crews of Swan River composite and UTS Haberfield/University of Queensland crews broke away to tussle for the championship place. It was the UTS Haberfield/UQ composite, coached by Alex Field and Michael Russell, who finished first with a surge on the line over the Swan River crew.

The PR3 Mixed Coxed Four final was raced by three composite crews, one of which was the named Australian Rowing Team crew of Alexandra Viney (Mercantile), Nikki Ayers (Capital Lakes), Thomas Birtwhistle (UTS Haberfield), James Talbot (SUBC), coxed by Renae Domaschenz (ANU), coached by Lizzi Chapman. The crew looks on-form, setting a blistering time of seven minutes 40 seconds into the stiff headwind. The Australian representatives were well clear of a healthy battle for silver between a Drummoyne/Uni Queensland/Nestles Rowing Club composite crew and a Tasmanian University/Balmain Rowing Club crew. It was the TUBC/Balmain combination, coached by Liam James and Michael Nermut, who managed to get up over the line for the silver, about a boat length in front of the other composite crew.

The wrap of the Open para-rowing events then saw New South Wales crowned the most successful para-rowing state at the regatta, with Rowing Tasmania Life Member Bob Blake, presenting Margot Harley of Rowing NSW, with the Bob Blake Trophy.

The Open Women’s Eight was a battle of the giants as two stacked Women’s National Training Centre boats took to the water alongside a predominantly University of Queensland composite crew. Unsurprisingly, the two boats full of Australian Rowing Team members jumped out ahead, and remained locked with less than 0.50 seconds between them for the first thousand metres; it was the crew of Leah Saunders, Emma Fessey, Ciona Wilson, Jacinta Edmunds, Rosie Popa, Annabelle McIntyre, Jess Morrison, and Lucy Stephan, coxed by Kendall Brodie that edged out in front with 500m to go.

As is known, and was called out over the loudspeaker, ”mad” Molly Goodman, current stroke of the Australian Team Eight, is known to fight and wind for races, and with the combination of Australian Rowing Team coxswain James Rook backed by Genevieve Horton, Olympia Aldersey, Bronwyn Cox, Georgie Rowe, Katrina Werry, Giorgia Patten and Sarah Hawe in the crew, they jacked up the rate and negatively split to a 1:33.5 into the headwind and came home with the win with 0.77 seconds back to the other crew.

This was coxswain Rook’s first ever national medal, with the Mercantile rower saying, “It’s pretty easy to cox well when you’ve got the best athletes in the world in your boat. We’re very excited to take the whole group off to Tokyo, and charge forward.”

“We’re really proud to have the opportunity to do this race; we’re excited to use this momentum as a platform to step off into preparation for the next few months.”

The sprints in the afternoon had a brief delay after a power outage struck the region, but the races were promptly resumed with plenty of fast finishes in the final events of the day.