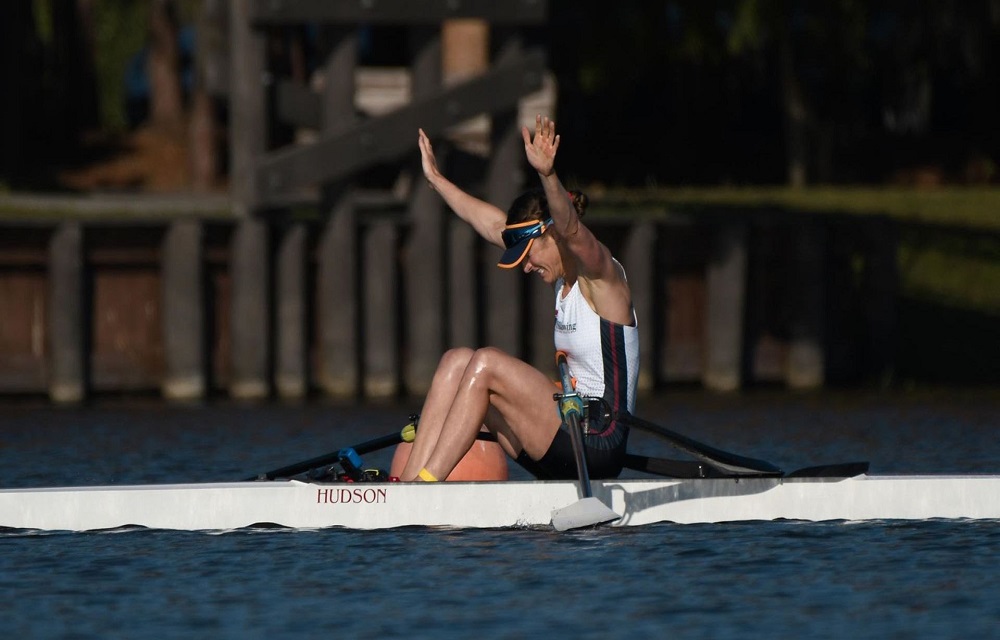 While five boat classes were contested during the five-day event, only the winner of the women's single sculls had the chance to earn her ticket to Tokyo, pending USOPC approval.

"It's a huge relief," Kohler said. "I've worked incredibly hard the past few years to race the single in Tokyo, so there was a lot riding on today's race. But, I had fun and trusted everything I've done up to this point. So, that was what I was thinking about while racing – trusting my preparation, thinking about my teammates, my coach and my family."

Kohler, the reigning world championships' bronze medalist, and Cambridge Boat Club's Gevvie Stone (Newton, Mass./Princeton University), the 2016 Olympic silver medalist in the event, quickly made it a two-boat race. As the two scullers crossed the 500-meter mark, they had open water on the remainder of the field, with Kohler in the lead by about a half-length. Kohler used the second quarter of the race to extend her advantage, pushing her lead to a small bit of open water just after the midway point.

She continued to pull away during the third 500 meters before coming home with nearly a four-second victory. Kohler crossed the finish line with a time of 7:23.37, with Stone finishing in a 7:27.17. ARION's Kristina Wagner (Weston, Mass./Yale University) finished third in a 7:39.29, with Boston Rowing Federation's Maggie Fellows (Warwick, Mass./St. Lawrence University) coming in fourth in a 7:45.67.

"There were doubts for sure, but you can't control, necessarily, what happens with the virus," Kohler said about the last year. "I just tried to keep my focus on each day. (At the finish line), it was just a lot of emotions – the ups and the downs and all the challenges that these past four years have brought. Obviously, all the successes too. I've had a lot of fun racing the single, and I'm glad I get to keep doing it."

In the men's single sculls, Craftsbury Green Racing Project's John Graves (Cincinnati, Ohio/Trinity College), a six-time senior national team member, took command of the race off the start, taking a length lead in the first 500 meters over teammate Lucas Bellows (Forest Lake, Minn./University of Minnesota). Graves continued to build on his advantage over the second quarter of the race, pushing out to a length of open water on the field.

"I just wanted to get into my rhythm as quickly as possible and let that carry me throughout the race," Graves said. "I was able to get a little lead and bring it home. Trials races are always pretty stressful, so I was really happy to get across the line and just get that step out of the way and focus on trying to qualify the boat."

Over the third 500 meters, the Cincinnati native continued to pull away from the field before finishing more than four seconds ahead of Bellows as the scullers crossed the line. Graves finished with a time of 6:59.08, with Bellows clocking a 7:03.50. Riverside Boat Club's Kevin Meador (Berkeley, Calif./Northeastern University) finished third in a 7:04.73, with Malta Boat Club's Leonard Futterman (New York, N.Y./Boston University) taking fourth in a 7:05.73.

"That's always been the goal, knowing that this was a step along the way, but very much with everything geared towards May in Switzerland," Graves said about now trying to make the Olympic team through the qualification regatta. "I know what that regatta is like, and I've been wanting to get back there since 2016. I'm super excited to take what I've learned here and find a little more speed as I go to Lucerne and try to get one of those spots."

"Yes, it's been a struggle," Sechser said about the last year. "There have been a lot of struggles, and I think having each other was the most important thing through all of that. The cancellation was really challenging, first as the qualification was canceled and then when the Olympics were postponed. We kept training really hard – there was all the pent up excitement about racing. Once the gravity of what postponement for an entire year felt like … we took a little bit of space to take care of personal lives, but that whole time knowing my partner was there, training hard on her own, waiting for me, was the saving grace of it all."

After a bobble during their starting sequence off the line, Sechser and Reckford worked their way back from fourth position to take the lead from the Cambridge/Potomac Boat Club duo of Mary Jones (Huntsville, Ala./University of Tennessee) and Emily Schmieg (Philadelphia, Pa./University of Pittsburgh), the 2018 World Rowing Championships' silver medalists in the event, as the crews approached the 500-meter mark.

After chasing down Jones and Schmieg, the duo continued their strong move and pulled away from the rest of the field over the second quarter of the race. They were never challenged the rest of the way down the course. Sechser and Reckford finished with a time of 6:59.32. Craftsbury's Grace Joyce (Northfield, Ill./University of Wisconsin) and Christine Cavallo (Windermere, Fla./Stanford University) finished second in a 7:07.85, with Jones and Schmieg finishing third in a 7:12.77. Mission Rowing's Sophie Heywood (Tempe Ariz./University of Wisconsin) and Sophia Denison-Johnston (Berkeley, Calif./UCLA) finished fourth.

"One step at a time," Reckford said about having a shot at Tokyo. "This is such a dream come true. I am trying to really just focus on the next step, which is Lucerne."

In the men's double, the Vesper Boat Club/Oklahoma City High Performance Center composite crew of Kevin Cardno (Huntsville, Ala./ University of Alabama, Huntsville) and Jonathan Kirkegaard (Philadelphia, Pa./Purdue University) held on to win the final despite having an oar hit a buoy with about 150 meters to go. Cardno and Kirkegaard moved into the lead as the crews entered the second half of the race and held about a half-length advantage on Penn AC's Justin Keen (Philadelphia, Pa./Penn State University) and Sorin Koszyk (Grosse Pointe Park, Mich./Cornell University) coming into the final 250 meters. As the boats approached the finish, Cardno and Kirkegaard clipped a buoy and had to quickly regroup. However, the duo was able to immediately recover and hold off the final charge from Keen and Koszyk.

"We were coming into the last 300, 250, and we were going up (in rate) and the wind was straight cross, so you're going to drift," Kirkegaard said. "I was trying to add some watts, keep the rate up, and I noticed we drifted into the buoys … I was like, 'Oh no, oh no." I gave it a little too much … he caught a buoy and lost his oar, grabbed it … We ended up doing a mini start, and we crossed the line first."

"I definitely kept it interesting there at the end," Cardno said. "I did not intend for that to happen. This was my first trials final ever, so it feels good that we did execute kind of what we wanted to do, and it worked today."

Vesper Boat Club's Zachary Heese (Pelham, N.Y./University of Virginia) and Jasper Liu (Phoenix, Ariz./University of Pennsylvania), who raced together in the lightweight quadruple sculls at the 2019 World Rowing Championships, won the final of the lightweight men's double sculls. Heese and Liu took a two-second lead in the first 500 meters and slowly built their advantage through the middle half of the race.

"We had a great race today," Heese said. " We were super excited that we had three doubles from our club in the final. We had an awesome training camp together, all three of us, and we really pushed each other. We knew when we got out on the start line today, it would be just like any other day where everyone was going for it. So, I think that made me a little nervous, but it also gave me confidence knowing that all six of us together had really put something together that would put us up on top."