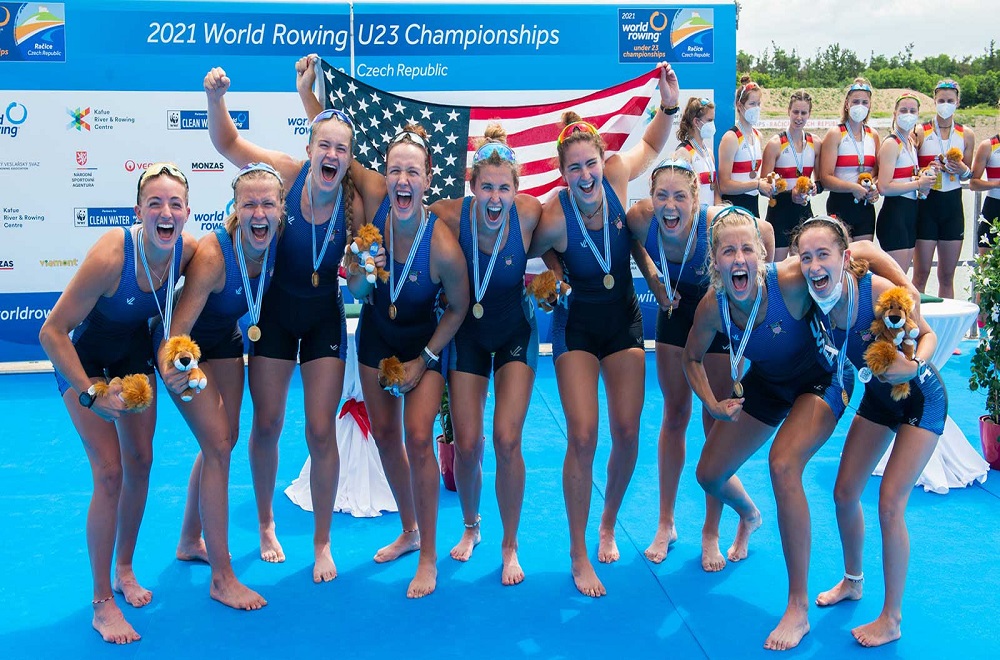 Gold for US U23 at World Championships

The U.S. won gold in the women's eight and silver in the men's eight and women's four to highlight Sunday's racing at the 2021 World Rowing Under 23 Championships in Racice, Czech Republic. In total, the U.S. won six medals during the five-day regatta.

"We were hoping to get off the start quickly, which we did not execute," McGinley said. "Our coxswain did a great job reorganizing the crew heading into the (1,000), which led to a massive charge in the third 500. We gained lots of momentum off of that surge, and it carried us through the finish line first."

Germany got off to the fast start, taking just over a one-second lead into the second 500. The U.S. reeled in the Germans as the crews approached the halfway point and then put on a huge move to row away from the rest of the field. The American boat crossed the line in a 6:16.69, with The Netherlands taking silver and Germany winning bronze.

"The feeling is unreal," Aronin said. "It was the perfect way to end the season. It felt so good to get that win with eight of my best friends."

"It was great to see the group come together over the last few weeks," McGinley said. "Although we all came from different programs, we were able to unify our rhythm effectively. It was a great experience, especially with the high energy and great attitude everyone brought."

For Raggi, Vallencey-Martinson, Cohen and McGinley, the women's eight was their second trip to the medal stand on the day. In Sunday's first race for the medals, the quartet won silver in the women's four.

"It is pretty surreal winning two medals today," McGinley said. "All of us watched the U-23 women, many of whom are racing in the Olympics in a few weeks, in 2014-2017 execute double racing strongly with great results, so it was really cool to have the opportunity to race for two championships ourselves."

Great Britain got off to a fast start, with the U.S. sitting just off the pace in second position. The two boats continued to separate from the rest of the field during the second 500 meters, with the British crew extending its lead over the Americans. The U.S. was able to cut into GB's advantage during the second half of the race but could not chase down the leaders.

"In the four, we were focused on hitting a long and powerful base," McGinley said. "We were able to execute that well, which led to us walking away from the crews in third and fourth position. We added moves to (try to) chase down the GB four in the last 750, but they had a faster piece and were able to walk away with the win."

Germany took the early lead on the field, with Italy in second and the U.S. sitting in third. The U.S. inched ahead of the field at the halfway point of the race as the top four crews were still within a second of one another. The U.S., Germany and Great Britain continued to battle each other for the medals as they hit the final quarter of the race. At the line, the British crew had pulled its bowball ahead, finishing with a time of 5:34.34. The U.S. crossed in a 5:34.55, with Germany taking bronze in a 5:35.58.

In the B final of the lightweight men's single sculls, Nicholas Aronow (Laurel Hollow, N.Y./Oak Neck Academy) chased down Denmark's Rasmus Lind to win the race by a foot, finishing seventh overall. After getting off the line in fourth position, Aronow rowed in second behind Ireland's Hugh Moore for most of the middle half of the race. Lind and Aronow passed Moore as the scullers approached 500 meters to go, with the Dane holding a narrow advantage on the American. The two battled it out over the final sprint, with Aronow inching ahead at the line. Aronow finished with a time of 7:13.62, followed by Lind in a 7:13.81.

In the B final of the men's single sculls, Will Legenzowski (Vista, N.Y./Brown University) finished second for an eighth-place finish overall. Paraguay's Javier Insfran held the lead through the 1,000-meter mark, just ahead of Legenzowski, before the America moved into first position in the third quarter of the race. Legenzowski continued to lead as the scullers hit the final 500 meters, but Uruguay's Martin Zocalo was able to put his bowball in front at the line. Zocalo finished with a time of 7:16.94, with Legenzowski finishing in a 7:17.08.

In the B final of the lightweight women's single sculls, five-time Under 23 National Team member Brigid Kennedy (East Greenwich, R.I./Harvard University) finished third for a ninth-place finish overall. Kennedy got off the line in fourth before working her way into second place with just 500 meters to go. However, The Netherlands' Femke van De Vliet used a strong sprint to move into second. Switzerland's Eline Rol won the race in an 8:06.26. Kennedy clocked an 8:10.23.

In the women's single sculls, Anna Matthes (Cambridge, Mass./Yale University) finished fourth in the B final for 10th overall. Matthes got off the line is sixth before moving into fourth in the second 500 meters. The Dutch sculler, Benthe Charlotte Gezineke Boonstra led the entire way down the course, clocking a 7:58.56 to win by two seconds. Matthes finished with a time of 8:07.20.

In the lightweight women's double sculls, Elaine Tierney (West Chester, Pa./Temple University) and Emily Molins (Wilmette, Ill./Stanford University) finished fourth in the B final for a 10th-place finish overall. France easily won the race in a 7:21.85. The U.S. finished with a time of 7:31.62.

The lightweight men's double sculls crew of Simon Dubiel (Seattle, Wash./University of Pennsylvania) and Eli Rabinowitz (Rye, N.Y./Georgetown University) finished fifth in the B final and 11th overall. Dubiel and Rabinowitz sat in fifth at each of the 500-meter splits. Italy won the race in a 6:30.94, with the U.S. finishing in a 6:47.04.