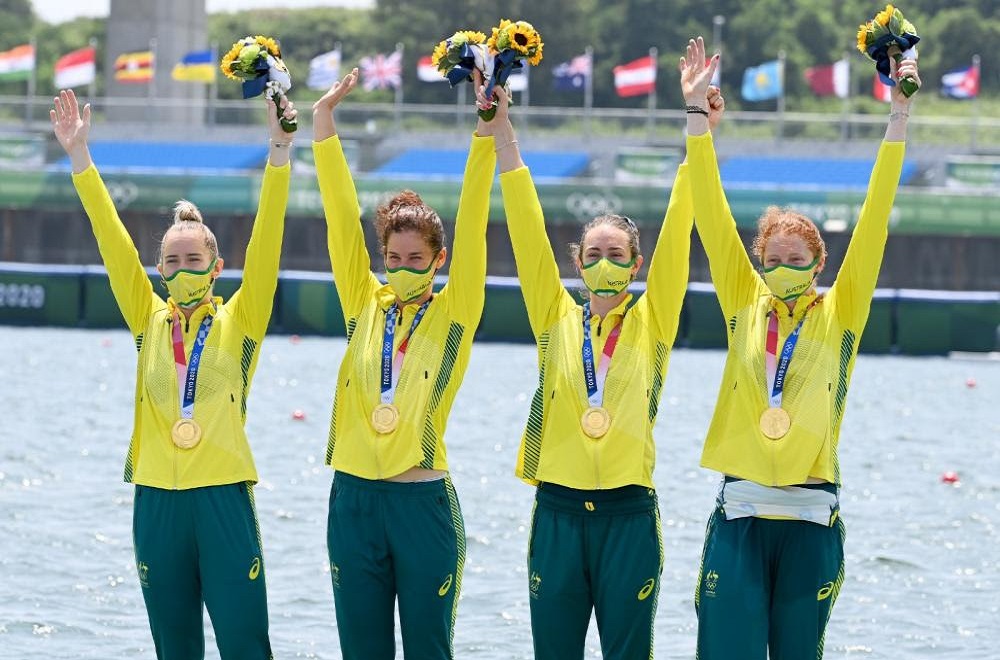 Fast conditions at the Sea Forest Waterway led to Olympic and World Best Times being set on rowing’s first day of finals at the Tokyo 2020 Olympic Rowing Regatta. After six finals races, Australia and the Netherlands are currently on top of the medals table.

The highly anticipated return of the women’s four to the Olympic programme set the standard of the day with Australia taking gold and a tight race with the Netherlands. Australia finished in a time of 6:15.37 setting a new Olympic Best Time by 13 seconds. The last time the women’s four was raced at the Olympics was in 1992 where Canada won the race on Lake Banyoles. The Netherlands finished with silver and Ireland won bronze and made history with the first Irish Olympic rowing medal for women. Aifric Keogh, Eimear Lambe, Fiona Murtagh and Emily Hegarty also secured the first Olympic medal for Ireland overall from the Tokyo Olympics.

The men’s four was won by Australia followed by Romania and then Italy. Australia led the race with Great Britain in second for much of the way. Just before the finish, Great Britain suffered from steering problems and then Romania and Italy came through to take silver and bronze respectively. Australia’s win set a new Olympic Best Time of 5:42.76.

The Netherlands picked up four medals today including bronze and silver in the women’s and men’s double sculls, respectively. In the women’s double Romania led for the majority of the race with New Zealand getting the better of the Dutch in the final sprint. Romania’s double of Ancuta Bodnar and Simona Radis, both 22 years old, took gold and set a new World Best Time of 6:41.03. New Zealand’s Osborne and Donoghue took silver and the Netherlands’ de Jong and Scheenaard won bronze.

For the men’s double a massive sprint by the French duo of Boucheron and Androdias gave them the gold with the Netherlands in silver and reigning World Champions China holding on to bronze.

The Netherlands men’s quadruple sculls crew of Uittenbogaard, Wiersma, Wieten and Metsemakers went one better taking Olympic gold in an Olympic Best Time of 5:32.03. A late surge by Great Britain gave them the silver medal with Australia taking the bronze. Australia also won bronze in the women’s quadruple sculls, adding to their total of four medals.

Coming out on top as Olympic Champions in the women’s quadruple sculls was China. The crew of Chen, Zhang, Lyi and Cui are the reigning World Champions and they won in commanding style setting a new World and Olympic Best Time at the finish line. Poland took the silver medal.

The eight-day rowing regatta began on 23 July with heats and repechages and semi-finals. Inclement weather caused a change to the racing schedule. Racing was cancelled on 26 and 27 July. This made for a catch-up day today. Racing continues on Thursday 29 July at 08:30 hrs JST and includes the remaining semi-finals and four A-Finals.