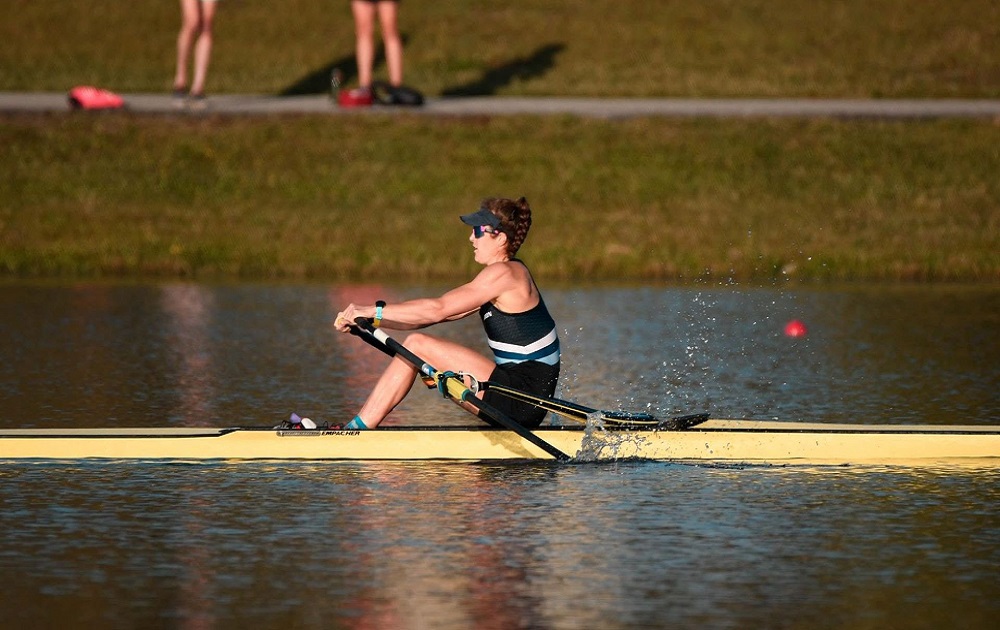 In today's first repechage of the women's single, ARION's Kristina Wagner (Weston, Mass./Yale University) established her lead off the start and continued to build her advantage down the course, crossing the finish line in a 7:49.85. Wagner finished 11 seconds ahead of USRowing Training Center-Princeton's Elizabeth Sonshine (Short Hills, N.J./Bates College), recording the fastest time across the four repechages and advancing to tomorrow's semifinals.

"It was good – definitely the best conditions that there have been this week, so I was just excited to get it done and move on to tomorrow," Wagner said. "I'm fortunate where I row with Saratoga Rowing, with ARION. (We've had) a lot of new people coming in from all around the country, a lot of young people, that maybe if we hadn't had this (extra) year wouldn't have started in the elite circuit, so definitely a lot of youthful energy that's been a nice change of pace."

"Today was kind of an opportunity for us to try to execute something we had been working towards for a while," Thompson said. "In our last month of training camp, we've been spending a lot of time in the double together. The focus has been to just string together some new technical adjustments in the racing environment. We've had some stumbles along the way, but today was a chance for us to demonstrate that a little better."

"Tomorrow is just going to be a real test for us, and I think we are just going to try to give it all we've got," Thompson said. "We're a constantly developing crew, so we're hoping that we can go surprise some people tomorrow."

In the men's single, Mike Clougher (Canton, Mass./Connecticut College), a two-time senior national team member, recorded the fastest time of the repechages, winning the third race in a 7.12.11. Riverside Boat Club's Kevin Meador (Berkeley, Calif./Northeastern University), who has represented the U.S. in the event at the past two world championships, won the first repechage in a 7:14.94, with Maritime Rowing Club's Casey Fuller (Newtown, Conn./Fairfield University) and Craftsbury's William Legenzowski (Vista, N.Y./Brown University) taking the other two races.

Erin Roberts (Fogelsville, Pa./Cornell University) and Hillary Saeger (Dedham, Mass./Marist College) won the repechage of the lightweight women's double sculls by more than five seconds. The crew finished with a time of 7:28.53, ahead of the Vesper Boat Club/GMS Rowing composite boat of Solveig Imsdahl (Philadelphia, Pa./Cornell University) and Margaret Bertasi (London, England/Princeton, N.J.). Both crews advanced to the semifinals.